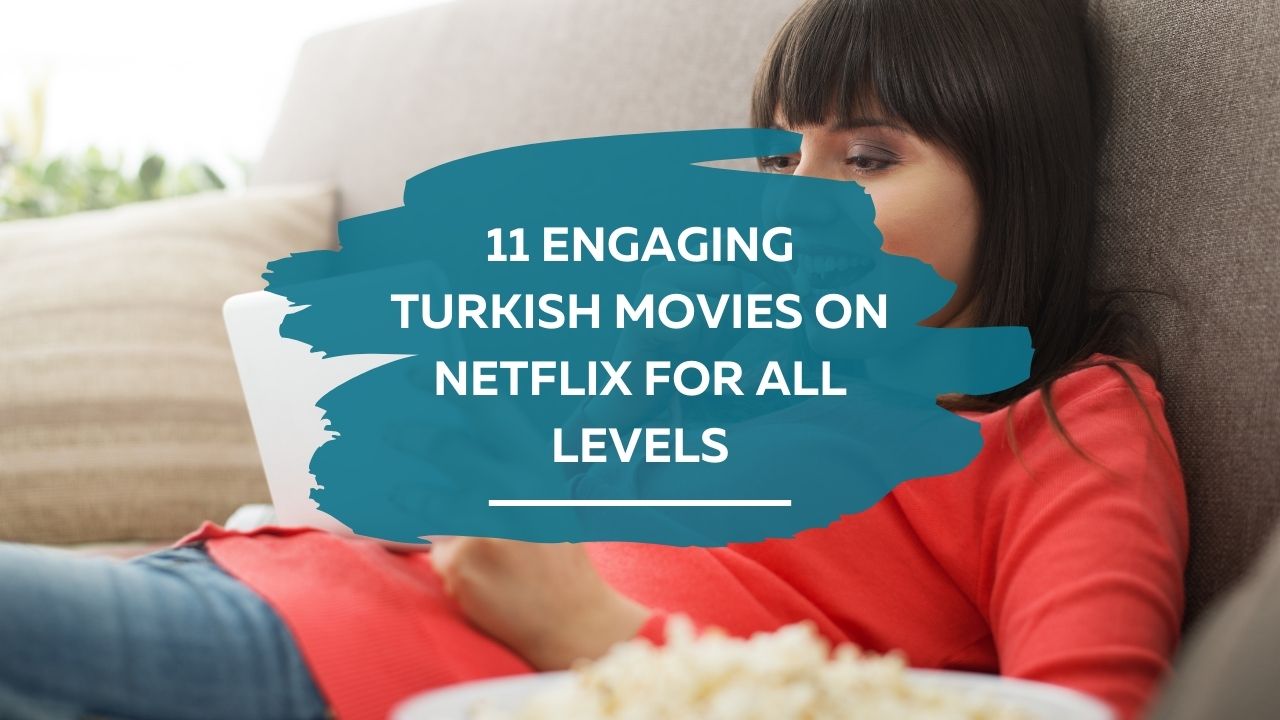 11 Engaging Turkish Movies On Netflix For All Levels

If you’re learning Turkish, but can’t visit Turkey anytime soon, don’t stress – there are plenty of amazing Turkish movies on Netflix to fill the immersion gap!

And if you’ve never watched a Turkish film before, you’re missing out. Turkey has become a major contributor to cinema in recent years, with tonnes of talented artists telling authentic stories that resonate around the world.

Not only can you soak up the true spirit of Turkey through Turkish movies on Netflix, but you’ll also get excellent real Turkish language input. Apart from the entertainment value, movies help you check your comprehension, learn colloquialisms and get some seriously good listening skills.

How To Learn Turkish Through Movies

Before I dive into the list, I'd like to give you a few tips for maximizing your learning potential with Turkish movies on Netflix. Let's take a look:

Still curious about how to make the most of foreign language movies? Check out this post.

But now, here are 11 of my favourite Turkish movies on Netflix right now. At the end, I also have a bonus movie that you won’t want to miss…

This is a fantasy thriller series about a female painter, Atiye, from Istanbul, whose perfect life is turned upside down after crossing paths with an archeologist who’s just made a fascinating discovery.

She’s happy, in love and busy having her first solo exhibition. Meanwhile, an archeologist has found an ancient and unusual artifact in an Anatolian archaeological site – one that looks exactly like a symbol in Atiye’s paintings. A symbol she sees in her dreams.

The drama that follows is about the artist’s journey to uncover the site’s mysterious link to her childhood. There are secrets, Middle Eastern tales and mythology, and beautiful visuals.

This is a good series to start watching now, because the third season is coming late in 2021!

In the wake of the Bosnian war, Salih, who’s just turned 18, leaves the orphanage where he was raised and goes in search of his long-lost family.

He finds work on a Serbian farm, where he discovers a new home, but things start heating up when dark secrets emerge. The film follows two families: the one on the farm, and that of Salih’s real mother.

This gripping drama is based on a true story and is a tale of family, love, trauma and identity. We see the reality of war-torn lives through the eyes of Salih, as he searches for a trail of hope in the fallout.

Kagittan Hayatlar is a sentimental Turkish drama that follows a young man named Mehmet who earns his living by collecting plastic bottles and other trash in the complex back alleys of Istanbul. He’s tough, kind-hearted and helps people in need, acting as a mentor for homeless kids and teens – even though his own health is rapidly declining.

One day he finds an 8-year-old boy (Ali) hiding in a waste bag. He takes him under his wing and tries to make his life as exciting as possible with cool experiences. Although he saves the boy, he seems to be the one most affected by their relationship.

There are intriguing glimpses into Istanbul slum life and a great atmospheric soundtrack, and although the movie gets pretty dark, it holds your heart until the hard twist at the end.

Here is a beautiful film set in a remote mountain village in 1960’s Turkey. A government teacher, Mahir, is posted far away from his family. He inspires the illiterate villagers to build a school for the children, changing them all forever.

Far more profound is the friendship that grows between Mahir and a disabled man, Aziz, who can only communicate with his horse.

This is a very moving film with stunning visuals and a rare chance to see some of the customs that shaped the lives of traditional Turks. The language level is not too difficult and you’ll hear a mix of beautiful phrases and cheeky quips.

While there are lots of comedic moments early on, this just sets you up for the tears that are guaranteed later!

Now, if you like the idea of a modern-day Shakespearean comedy, this one’s for you! It’s a beautiful and dramatic story about the fortune of a Turkish girl who is born in a village during the 1950s – a time when Eastern customs and traditions suffocated women's dreams and rights.

This town was known for two things: the mayor’s apple orchards and the mayor’s daughters. And the tale is narrated by the mayor’s youngest daughter, Muazzez…

It’s a visual feast of colors, costumes, light and locations – an awesome experience of Turkish culture and rituals. The views of the mountains and fields are pretty spectacular, too.

This is a good one for witty dialogue at a higher level, and it’ll have you simultaneously laughing and crying!

The scene for this epic period drama is a 1940’s mining town during WW2. Two young poets living the bohemian life are forced to work in a coal mine, while both dreaming of fame.

The best friends fall under the spell of a high society girl and for just a little while, she becomes their escape and muse. But there are threats to their survival and happiness: poverty, prejudice in the class system, unfulfilled hopes and worst of all, tuberculosis.

With a stunning soundtrack, this story is both heartbreaking and rapturous… a great one if you’re into literature! The language is at a higher level than my other recommendations – full of lyrical, poetic lines, as well as dialogue typical of the era.

This one’s more of an arthouse film in a bit of Hollywood tradition: two strangers are thrown together on a train journey from Ankara to Izmir. They clash, of course – she’s feisty; he’s annoying.

But since it’s a 14-hour journey, the barriers eventually come down and they find an unexpected attraction to one another. Unlike most Turkish movies, there’s no holding back on the physical side of romance, either.

The entire film is just about the guy and the girl, but this is great for you as a learner, as you’ll be listening to a lot of very natural everyday dialogue in modern Turkish.

This story is a touching drama about injustice and enduring love. It explores the relationship between a mentally impaired father and his adoring 6-year-old daughter.

Memo, who is mentally the same age as his child, is wrongfully accused of rape and murder, and sent to prison. Ova, his little girl, vows to prove his innocence.

In prison, Memo is rejected by the other inmates, but he builds friendships with the hardened criminals in his cell. They devise a plan to smuggle his daughter into the prison so that he can see her again.

Interesting to know: this film was Turkey’s entry for the 93rd Academy Awards.

Here’s a good laid-back movie based on a novel. Orhan, an expat writer living in London, returns to his native Istanbul to help a famous director, Deniz, edit his first book.

On his first night back, the editor disappears and Orhan finds himself stranded inside the web of Deniz’s tangled relationships and strange family members.

He sets out to find his friend and discovers a hidden side of the missing director. He also rediscovers buried emotions for the fabled city and a hunger to write once again.

There’s a sense of underlying political tension in the city. You also see a lot of modern Turkish art and hear a number of Turkish pop songs.

If you like detective stories, here’s one for you. While playing in the garden, a boy named Efe witnesses something that will change his life forever. Shortly after, he witnesses his father’s demise. He is given to a humble fisherman, who raises him to live off the sea.

As an adult, Efe learns about his real family and goes on a mission of revenge and redemption, keeping his identity secret. This addictive series with a ‘telenovela’ feel follows Efe as he searches for his true identity and to right the wrongs of the past.

There’s murder and intrigue, romance and humour. And as always with great productions from Turkey, the costumes are almost as awesome as the scenery!

Clair-Obscur is a tale of contrasts: you’ll see two very different and dramatic sides of modern Turkey. The story is a parallel study of two women living in a society where men dominate and women suffer. One’s a glamorous psychiatrist; one’s a traumatized teenage wife.

It’s a heartrending movie about the possibilities and limitations that exist for women in Turkey today. You’ll learn a lot of very honest language about intimacy and women’s feelings about relationships – not something you get too often in a Turkish context!

This is definitely an adults-only film, but the acting from the main character is phenomenal. As a Turkish learner, you’ll hear tonnes of very short and impactful sentences – especially when the psychologist and wife are interacting. Good for even beginners!

There are plenty of other Turkish movies and series available on Netflix and the list keeps growing, so once this selection has you hooked (and I think it will) you can have endless fun exploring the rest. By the time you know who your favourite director is, Turkish cinema will have taught you tonnes about the language!

Now, I promised you a special cinematic bonus at the end, so here it is…

Love cats? I’m adding this absolute gem of an indie film from Turkey as a bonus, since it isn’t available on Netflix, but deserves to be watched by everyone studying Turkish.

For thousands of years, free-roaming cats have come and gone from Turkey’s neighbourhoods, creating strong bonds between communities and becoming an important part of everyday life. This is a film that follows the lives of seven of these cats:

You’ll also get a lovely, insightful glimpse into the real-life Turks who live among this cat kingdom! A good movie for beginners and intermediate learners, as the Turkish is rather basic. You can stream it on YouTube Premium or Kanopy.

Why Watch Turkish Movies On Netflix?

I realise you might still be wondering what you can learn from Turkish films that you can't learn through apps, podcasts, and flashcards.

Well, Turkish movies on Netflix not only immerse you in the language, but they also help you develop cultural, historical, and social fluency that you wouldn't learn anywhere else.

When you watch Turkish acting, you hear spoken language in many different contexts and situations that you probably wouldn’t ever experience in day-to-day life. Especially if you don't live in a Turkish-speaking country.

What’s more, you'll hear a lot of slang, colloquialisms and dialects with the correct pronunciation. And did I mention humour? Nobody can teach you how Turkish people joke around or tease each other, other than Turks themselves! Movies will give you all of that.

At the end of the day, this is a cool way to unwind and keep you engaged in the language throughout your journey to fluency. Turkish can be tough, so you might not always feel like a lesson, but there’s no reason to not watch a movie!

That’s all, folks! I hope this selection brings you some smiles.