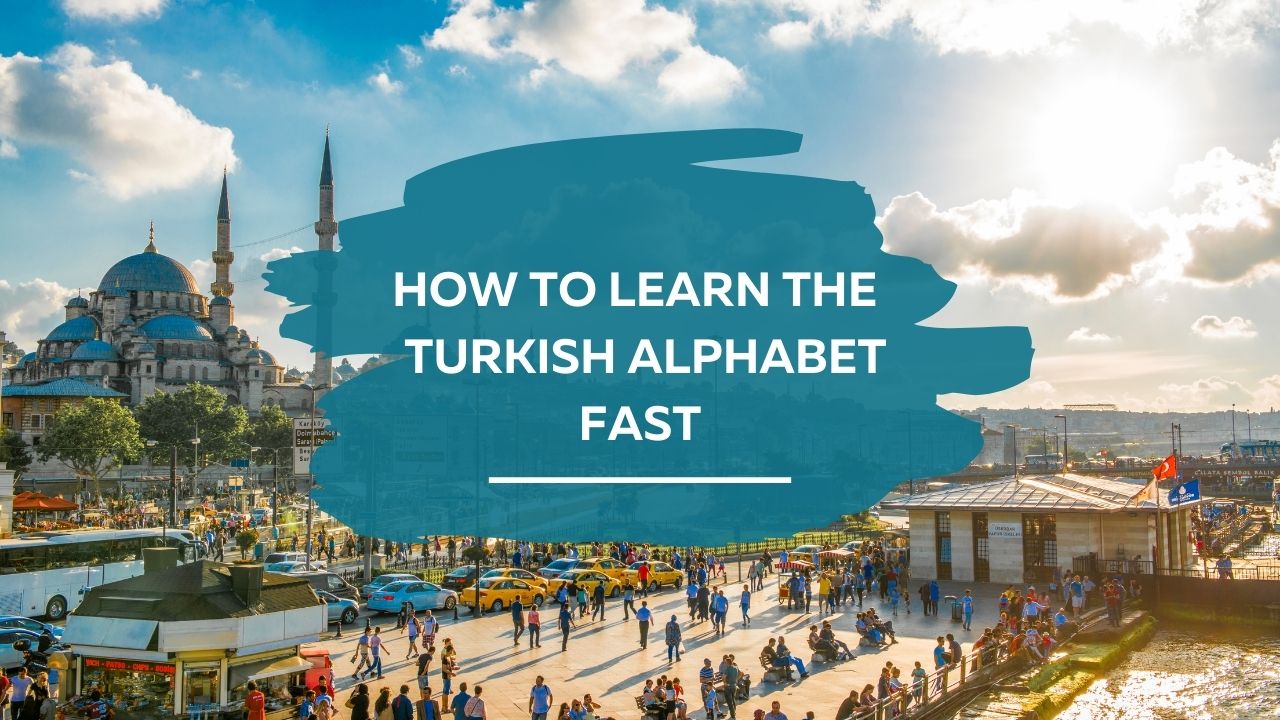 How To Learn The Turkish Alphabet Fast: A Quickstart Guide for Beginners

Learning Turkish can be tough. Many of the grammatical rules and word order are completely different from English and there is very little overlap when it comes to vocabulary (though there are some modern words the Turks have borrowed from English).

The good news is that learning Turkish is much easier now than it would have been 100 years ago thanks to the modernization of the country and the adoption of the Latin script.

Now in addition to hearing the language, you can see it too and understand the letters from day one.

So here's a beginner’s guide to understanding the Turkish alphabet.

A Brief History Of The Turkish Language & Alphabet

When the Ottoman Empire fell at the end of World War I, the region that now makes up Turkey was in complete disarray. Numerous countries from Europe carved it up and claimed land as their own.

That’s when Mustafa Kemal, also known as Ataturk (“father of the Turks”) came to the rescue. With Ataturk at the helm, the Republic of Turkey was formed.

But what does that have to do with learning Turkish you might ask. Well, actually, quite a bit. Ataturk wanted Turkey to be a modern country so he did away with head coverings and an antiquated Arabic-like script. To push his new nation into the 20th century, he called for the adoption of Latin letters.

While this was bad news for older people at the time who had a hard time communicating with the younger generation, it is great news for Turkish language learners today as you can see and recognize the alphabet almost immediately.

One Letter, One Sound

With its recent overhaul, Turkish became a very systematic and orderly language. That is certainly true of the alphabet too. Unlike English where there are 26 letters but really dozens of phonograms that can make multiple sounds each, in Turkish, each letter makes only one sound. Always.

That makes learning the alphabet extremely easy as you can tackle it in one afternoon. In fact, it is so much easier than English that spelling tests and spelling bees aren’t even a thing in Turkish.

Everyone knows how to spell every word because each letter only makes one sound. In Turkish schools, learning how to read takes one semester in first grade and that’s it. After that, the kids can just read.

A Few Different Letters And A Few Missing

But again, because those letters each only make one sound, they are relatively easy to memorize and once you do, you can be off and running learning the rest of the language.

How To Pronounce Each Letter Of The Turkish Alphabet

There are 29 letters in Turkish and each one makes only one sound. The key to mastering the alphabet is learning which sound each letter makes and figuring out how to pronounce it.

In fact, if you're new to studying Turkish, you should take extra time to work on your pronunciation as Turks care a great deal about how their language sounds and that people speaking it say words correctly.

I don't mean to scare you (I'm not the fear villain!) – you can be sure Turks will be gracious if you make mistakes. It is just that they are so grateful when foreigners know their language and know it well that it is worth the extra effort.

Here is the sound for each letter and an example for how to pronounce it:

A – ah Pronounced like the first o in opportunity—make sure your mouth is wide open when you say it.

B – b Same sound as in English.

C – j this might be one of the hardest letters to get used to as it never makes the “k” or “s” sound but only the “j” sound like in John.

Ç – ch This is one of the extra letters and it always makes the “ch” sound like chapter.

E- eh Always makes the sound of the first “e” in everybody.

F – f Makes the same sound as in English.

G – g Always makes the hard “g” sound as in the word guitar.

Ğ – This letter is called the “yumuşak g” which literally means soft “g”. The letter doesn’t make a sound but is a place holder to slightly elongate words and sounds that have it.

I – This letter can be tricky for English speakers because we don’t have an equivalent. Even though it looks like an “i” it makes a slightly different sound. It’s like a mix between an “uh” and an “ih” said from the back of the throat.

İ – ee The letter that looks like an “i” in Turkish always makes the long “e” sound. It sounds confusing, but once you get used to it you’ll have no problem.

J – This letter looks like a typical “j” but it is more of a cross between a “j” and “sh.” It’s a less common letter and was imported to help with many of the words of French origin.

K – k Makes the same sound as in English.

L – l Makes the same sound as in English.

Ö – This is probably the hardest letter in Turkish. It is like an “o” but said in the front of the month with the lips dramatically pursed.

If you watch video of Turks speaking Turkish and stop it when they are saying this sound you will see that they really do purse their lips hard on this sound.

Pronunciation is super important with this letter too because it radically changes the meaning of a word. For example, olmak is “to be” but ölmek is “to die”. You don’t want to mix those up.

U – oo The letter “u” in Turkish sounds like “oo” but from the word boot and not book.

Ü – This is another lip pursing letter. It is like “oo” but from the front of the mouth and with lips tight.

Ş – sh Always makes the “sh” sound like in shop.

V – v Turkish has a “v” but it is so soft that sometimes they don’t even pronounce it.

You’ll also notice that Turkish doesn’t have a th sound. While that shouldn’t be a problem for you, it can make it tough for your Turkish friends to say the sound.

One last thing you should know about the Turkish alphabet is something called vowel harmony. Turkish is designed to sound nice (and it really does, especially when you hear mothers speaking it to their children at the park—it almost sounds like singing).

So when you add a suffix to a word (something you do almost constantly in Turkish) the vowel you put in the suffix depends on which vowel the root word ends with.

A good way to see this is by looking at two of the words we already saw: olmak and ölmek. Before we even add suffixes you can see that the undotted “o” goes with the “a” and the “ö” goes with the “e.”

You can also see it when you say or write the simple past tense of these words. For olmak it is oldu while for ölmek it is öldü. Because the vowel in the root is dotted, so is the vowel in the suffix.

Vowel harmony can take a little while to get used to, but once you do it will be automatic and you will feel wrong when you say a word wrong.

The Turkish Alphabet: Easier Than It First Seems

Turkish really is a beautiful language and learning it unlocks millions of new people in Turkey and Europe you can communicate with.

And don’t let its foreignness or dotted letters scare you. Turkish is a systematic, orderly language with very few exceptions in grammar and almost none in spelling.

Because each letter only makes one sound in Turkish, you can master the alphabet in a day and be on your way to learning Turkish in no time. And as you do so, all I can say is kolay gelsin! (may it be easy for you).