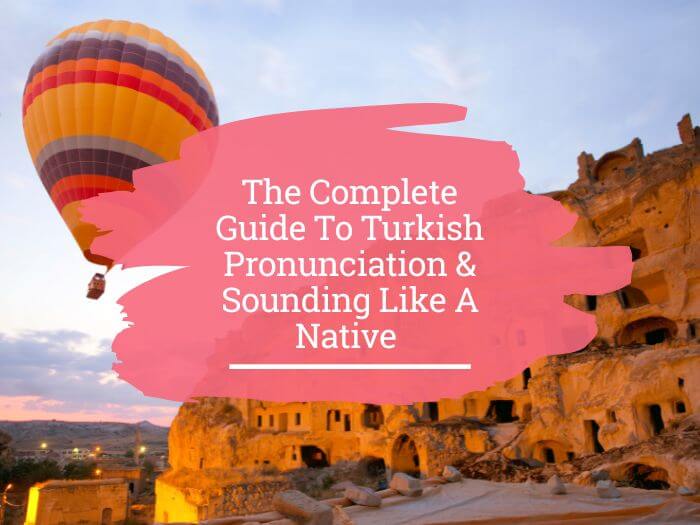 The Complete Guide To Turkish Pronunciation & Sounding Like A Native

If you’re thinking about learning Turkish, then you'll be pleased to know that Turkish pronunciation is one of the most straightforward aspects of Turkish to master.

In fact, it’s one of the most systematic languages when it comes to pronunciation. Once you start learning Turkish, you’ll soon realize consistency in pronunciation is a key feature of Turkish. In other words, what you see is what you pronounce!

So let’s walk through some of the key components of Turkish pronunciation that’ll help you quickly learn Turkish and sound like a native speaker!

By the way, if you’re determined to learn Turkish, I’d recommend that you look into Turkish Uncovered.

It’s a course where you’ll be able to adopt the unique StoryLearning® approach to learn Turkish through stories, and not through rules or drills. It’s fun, easy, and effective!

Why Is Turkish Pronunciation Easy?

More importantly though, Turkish is a phonetic language, meaning that you pronounce words exactly as they are written out. In other words, one letter will always represent one type of sound.

To understand this more clearly, think about English, a language that isn’t phonetic, and the word “read”. If you “read” this word and pronounce it in your head, you may notice that it can be “read” or pronounced differently in other contexts, including this sentence!

Also, the phenomenon of having different letters or combinations of letters representing different sounds is something that just doesn’t happen in Turkish.

For example, the letter ç in Turkish will always be pronounced as “ch” as in “chair”, with no exceptions. One letter will always represent one pronunciation in Turkish – what you read is what you get!

In addition, every sound that is spelled out in a Turkish word or sentence is always pronounced! No letter in Turkish is in a word if it isn’t pronounced. As an example, think about the silent “e” in English like in the word “plane”. There is no such thing in Turkish.

On top of this, one thing that makes Turkish unique is that it practices vowel harmony. Vowel harmony is where vowels that are pronounced in different parts of the mouth are grouped together with one another, and therefore more likely to be pronounced together in sequence.

This makes Turkish an easier language to pronounce, as you aren’t forcing your mouth to do backflips!

Before jumping into the pronunciation of each letter in Turkish, it might be useful to take a look at the International Phonetic Alphabet (IPA).

Since Turkish words are pronounced as they're spelled, it’s not fully necessary to refer to the IPA for learning how to pronounce Turkish, as might be the case for other non-phonetic languages like English or French. Nevertheless, it can be useful for understanding the differences in pronunciation of some letters.

So with that said, let’s dive right into the pronunciation of each letter in Turkish. In the examples below, each sound will be represented by both the letter which is used in Turkish, its IPA symbol, and examples of English and Turkish words which use the sound.

Each of the vowels correspond to one unique sound. The vowels a, e, i, o, and u are similar to how they are used in English:

Then there are vowels that aren’t commonly written out in English: ı, ö, and ü. However, for each of these vowels, there are corresponding sounds that are used in the English language.

Here’s a simple guide to pronouncing Turkish vowels in a table:

There is one last vowel that doesn't frequently appear in Turkish, but is nevertheless important to learn: â, also known as şapkalı a (‘a’ with a hat).

You guessed correctly if you think that it’s pronounced similarly to the vowel a. However, there is a faint “y” or /j/ sound that comes right after the consonant that comes before it.

For example, there is a difference between pronouncing the word kar (snow) and kâr (profit), where the first sounds like “car” in English, while the second sounds like “kyar”.

Now that you’ve mastered pronouncing Turkish vowels, let’s move on to the consonants!

There are a total of 21 consonants in Turkish. Fortunately, most of these consonants aren’t difficult to pronounce if you’re already an English speaker, because they correspond to the same pronunciation in English.

Here are the Turkish consonants that have the same pronunciation as written out in English:

At the same time, there are a couple of sounds that are present in both Turkish and English, but are written out differently.

One of the biggest tricks in Turkish is that there are two letters that appear the same in Turkish and English, but are pronounced differently: the letters c and r.

Therefore, it’s important to be mindful that these need to be pronounced differently from the way you would in English:

A Consonant Unique To Turkish: ğ

Lastly, there's one consonant that's unique to Turkish: ğ. In Turkish, it’s known as the yumuşak ge, or “the soft ‘g’”. While it looks like the letter g, this letter doesn't have any sound, and instead lengthens the time you spend pronouncing the vowel that comes before it.

It’s important to lengthen the time you would pronounce the preceding vowel if you see the letter ğ, because you might end up saying an entirely different word with a different meaning!

For example, if you pronounce the word ağda (wax) without lengthening the first a sound, people might think you are referring to the word ada (island).

In other instances, the ğ doesn’t necessarily lengthen the vowel that comes before it, but helps you with pronouncing two consecutive vowels that come one after the other.

For example, you would pronounce the word soğuk (cold) as “so-uk”. In these cases, one trick is to simply ignore the ğ in the middle of the word.

Other Pointers For Pronouncing Turkish

Now that you’ve learned how to pronounce every letter in Turkish, you’re close to mastering Turkish pronunciation! But before being able to say that you’ve mastered it entirely, here are a couple pointers to keep in mind.

As mentioned in the beginning of this post, Turkish is phonetic, so every letter in a word or sentence is pronounced according to its corresponding sound. There are no silent letters as is the case in English. What you see is what you pronounce!

No Combination Of Consonants That Create New Sounds

Also, there are no combinations of consonants that create a new sound, as you might see in English. For example, the combination of “th” in English might be pronounced as “th” or /θ/ as in “thing”, or “th” or /ð/ as in “the”.

Because this feature doesn’t exist in Turkish, you would pronounce the t and h that come together in a word according to their corresponding sounds.

As an example, if you see the word ithal (imported), you would pronounce this as “it-hal”, not “ith-al”.

The h Is Always Pronounced

It’s also always important to pronounce the letter h when you see it in a word. Unlike in English where the “h” sound might be dropped from a word in which it appears, it's always pronounced in Turkish.

For example, to pronounce the word rahmet (mercy), you would not say “ra-met”. Instead, you would say “rah-met”.

There are some words in Turkish where you might have two of the same consonant appear consecutively one after the other. These are words like maddi (material) or halletmek (to solve).

To pronounce these words, you simply put an extra stress on the double consonant. For example, you would pronounce maddi as “mad-di”, not “ma-di”, or halletmek as “hal-let-mek”, not “ha-let-mek”.

In other words, once again, you would pronounce these words as they’re spelled!

Now that you’ve learned everything you need to know for pronouncing Turkish, it’s time to get practicing!

Here are a couple ways that you can practice Turkish pronunciation:

1. Listen To Lots Of Turkish

When going through a new list of vocabulary words or a new lesson, it’s always worth trying to sound out new words and sentences as much as possible so that you can start comfortably pronouncing Turkish in everyday life.

While it might feel daunting, you could try recording yourself speaking in Turkish and pronouncing new words, and comparing the way you speak to native speakers.

It’s also important to practice speaking with native speakers so that you get the hang of how words are pronounced. Try joining an online or in-person conversation group for Turkish, or setting up tutoring lessons with a native speaker!

Lastly, the most important thing is that you stick to it! At the end of the day, pronunciation is not what makes Turkish challenging. After all, it’s one of the easier languages to learn how to pronounce.

As you progress in your Turkish pronunciation skills, your confidence to speak in Turkish will also go up, helping you pick up Turkish quickly! That will help keep the fear villain at bay and ensure that you develop your Turkish speaking skills faster.