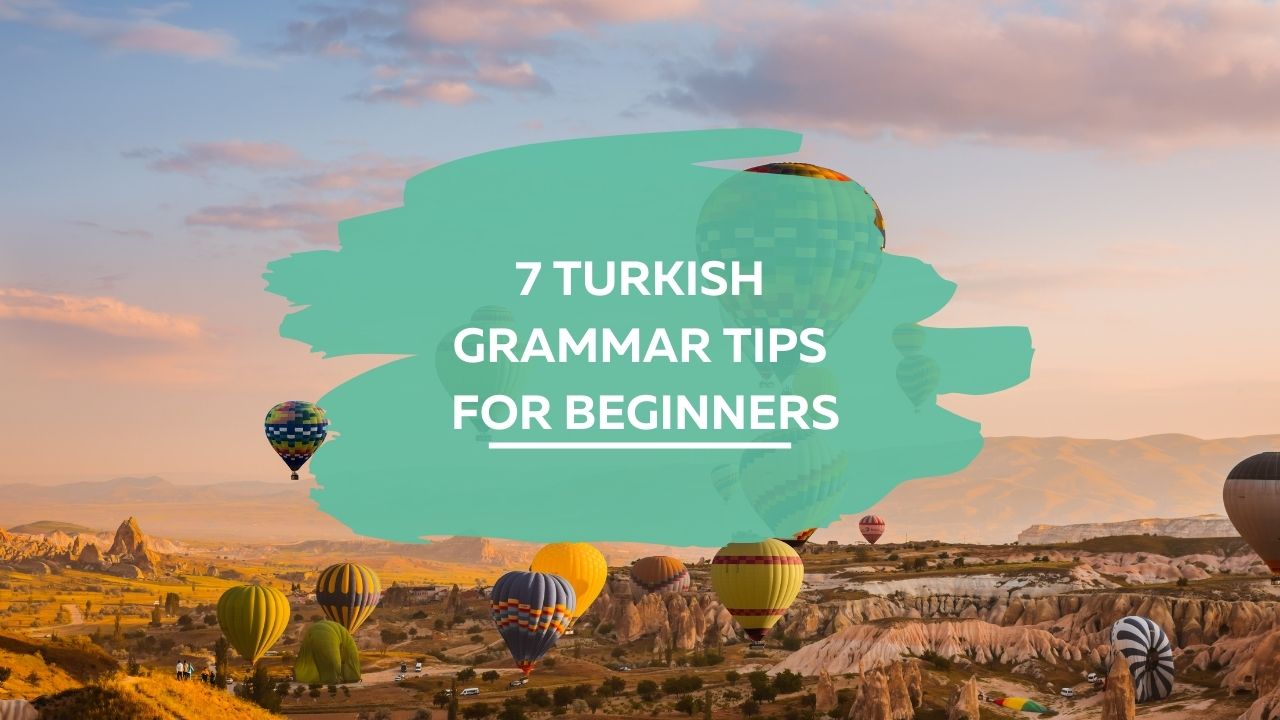 And while you can probably navigate most tourist spots by speaking English with eager Turks, the best way to get a true taste of the real Turkey is to learn Turkish.

But where to begin? The prospect of learning a new language can seem daunting, especially when it is one completely different than your native tongue. If English speakers have a hard time learning German, Spanish, or French, won’t learning Turkish be impossible?

Far from it. While it’s true that Turkish comes from a different language family than English, with a good effort and by understanding several key grammar points, anyone can learn this beautiful language.

Like with any language you will have to work to learn Turkish. But in this case, working smarter rather than harder can pay great dividends. Here are seven Turkish grammar tips to help you do just that.

One of the first Turkish grammar tips Turkish language learners discover is called vowel harmony. What it means is that the eight Turkish vowels a, e, ı, i, o, ö, u, ü are broken into two different groups.

How this works itself out is that when a word contains one of these vowels, the ending you place on the word will change accordingly. Let’s take a look at a couple of simple examples.

In Turkish the word for house is ev. If you are talking about more than one house you would add the plural ending which is -ler/-lar. The way vowel harmony works is that because ev has an “e” you will add the -ler ending to make evler.

Let’s look at an example from the other vowel grouping. The Turkish word for person is insan. Because the last vowel in the word is an “a” that will dictate which vowels will be in any endings you add to the word. So if you wanted to make the word plural you would add the -lar ending to make insanlar.

This works with the other vowels and endings other than the plural too.

Tip #2 Verbs Go At The End Of A Sentence

A proper Turkish sentence is structured almost completely backward from an English one. This can feel tricky at first and if you are translating you might feel like you need to work from right to left rather than left to right.

Even though it takes some getting used to, you will most likely catch on pretty quickly. You might even come to prefer the logic behind putting the verb at the end. Here are a few examples.

But before we look at personal endings in more detail, let’s look at another example of putting the verb at the end of the sentence.

Don’t worry about the endings on these words at this point. The point is that the verb in this sentence is taşınmak which means to move and it's placed at the end of the sentence.

Tip #3 A Word Can Be A Sentence

You may have noticed from the examples so far that one or two words in Turkish can form complete sentences that would require five or six words or more in English. That’s because Turkish is a language of suffixes.

In Turkish, you can take a root word and add two, three, and sometimes even more suffixes to change the meaning of the word. Here is an example.

The word gidecektim uses some advanced grammar you don’t need to worry about just yet. It simply shows the principle of adding suffixes. Let’s break it down.

The verb to go is gitmek. For reasons you will learn later it becomes “gid” in this case.

Then we add the future “-ecek/-acak” tense (note that because gitmek is part of the dotted vowel grouping we use the ecek version of the suffix).

Finally the -tim construction is the past tense grammar. And because it is an “m” at the end it means the person is talking about themself.

One of the most helpful Turkish grammar tips you will ever hear when it comes to learning Turkish is to know whether a verb is dative, ablative, or accusative. It isn’t enough to know what a verb means, you have to know how it is used, and knowing which of these three it is helps immensely.

Dative verbs are those that directionally go to something or somewhere. Turkish doesn’t really use prepositions. Instead, the verb determines which ending you add to the previous word.

For example, you saw earlier that gitmek means to go. This is the most natural dative verb because when you go somewhere you go to it. This means that you will add the dative “a” or “e” (depending on vowel harmony) to the place you are going to. Here is an example:

In Turkish, you add the a/e to the end of the word preceding the verb to show the going to action.

Now let’s look at ablative case verbs. These are the verbs that have a from meaning. When you use an ablative verb you need to place a dan/den at the end of the word preceding the verb. Here is an example:

Because the person is moving away from the house, you need to use the dan/den ending with the verb çıkmak which means “to leave”.

The accusative is more difficult to master than the dative and ablative cases. It is used when you are talking about a specific object or person and roughly carries the same meaning as the words the, this, or that. To use it, you add an ı/i to the end of the object.

Earlier you saw a sentence that was general: Yeni bir ev aldım. That would mean I bought a house but the sentence doesn’t specify which house. If I were talking about the specific house I bought I would change the sentence to this:

It can feel difficult to speak without prepositions at first. But with time you will master it no problem. Particularly if you apply the StoryLearning® method and focus on learning through story, not rules.

Not every language is as picky about he/she. If you have ever spoken to someone that speaks a language with a neutral third person you have probably noticed they mistake “him” for “her” or “she” for “he” all the time when they are speaking.

That can be a problem for Turks when they are learning English because the third person in Turkish is “O” and can mean either “he”, “she”, or “it”.

While this isn’t difficult for Turkish learners from an English background when they are speaking, it does mean you need to pay attention when others are speaking because you will learn whether they are talking about a “he”, “she”, or “it” from the context. Here is an example.

The only other thing to keep in mind about the “o” third person is that it has the most basic endings which makes it the easiest to master.

Like many other languages Turkish has six different “people.” There is me, you, he/she/it, we, you plural, and they. In Turkish these are: ben, sen, o, biz, siz, onlar. Each of these people comes with a different ending depending on how the word is being used. We will look at a few examples for each.

The possessive for ben is “benim.” To signify ben you often add an “m” to the end of a word.

The possessive is “onun.” Depending on vowel harmony you might add an ı/i or u/ü.

You plural in the possessive form is sizin. Verb ending is siniz but of course changes deepening on vowel harmony.

The plural third person in the possessive form is onların. Verb ending is ler/lar.

One final Turkish grammar tip that is helpful to remember as you head out to practice your Turkish is that it is polite to be plural. That means when you are speaking to a new acquaintance, someone who is older than you, or someone in authority you should use the you plural grammar siz.

So when you ask how are you, instead of the more informal sen nasılsın? you would use the more formal Siz nasılsınız?

This takes some getting used to but it is worth it to show proper respect and to impress others with your understanding of the language.

Even if you are not saying you, you can add the plural to other words to be more formal. For example instead of Merhaba which means “hello”, you can say Merhabalar. This is the more polite/formal way and will definitely be appreciated by the Turks you talk to.

Next Steps To Learn Turkish Grammar With Ease

If you keep these seven Turkish grammar tips in mind you will do quite well and be on your way to learning Turkish. No matter what the grammar villain might say!

In the meantime, make sure you're immersing yourself in Turkish daily, whether that's by watching Turkish movies on Netflix or reading a short story in Turkish.

Thanks to daily contact with the language, particularly through story, you'll start to internalise the grammar, without needing to spend hours doing grammar exercises or with your head buried in a textbook.