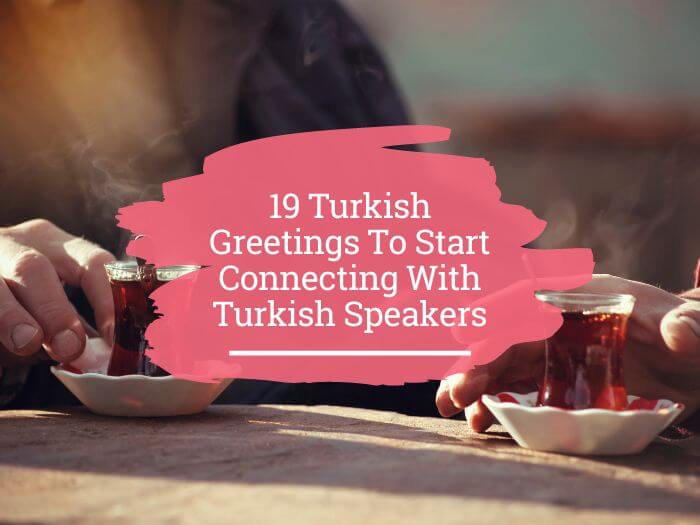 Have you started learning Turkish? One of your first lessons in Turkish will likely be on Turkish greetings so that you can start using them to connect with other Turkish speakers.

There are a variety of different ways to greet, meet, and say good-bye in Turkish. There are also a lot of helpful phrases that you’ll likely want to use when meeting new people.

So to get you started on learning how to greet and meet people in Turkish, here’s a run-down on the most common Turkish greetings that you’ll likely hear and use in your daily life.

By the way, if you’re trying to learn Turkish, I’d recommend that you look into Turkish Uncovered. It’s a course where you’ll be able to adopt the unique StoryLearning® approach to learn Turkish through stories, and not through rules or drills. It’s fun, easy, and effective!

How To Say Hello In Turkish

The first thing you’ll need to learn when you start learning Turkish is how to say “hello”. The chances are, if there’s one word that any yabancı (foreigner) in Turkey knows from day one, it’s:

Here’s a fun fact: merhaba! (hello!) isn’t originally a Turkish word, but instead comes from Arabic. However, it’s been used as the most common form of greeting people over the last couple of centuries since the time of the Ottoman Empire.

Merhaba is by far the most common way of greeting someone, and you can use it to greet both individuals and groups of people.

Just remember that unlike in English, the h in Turkish is always pronounced. So you’ll want to make sure that you pronounce this as “mer-ha-ba”, not “me-ra-ba”.

For more on the influence of Arabic on Turkish, read this post on Turkish language history.

Other Basic Greetings For Hello In Turkish

Besides merhaba (hello), there are a number of other ways that you might say “hello” in Turkish.

The first of these greetings is a variation of merhaba:

The only difference between merhaba and merhabalar is that the word merhabalar includes the suffix -lar at the end, making it a word that is plural. So technically, imagine that you’re saying “hellos!” when you say merhabalar.

That said though, that doesn’t mean you use merhabalar to greet a group of people. It’s simply a more casual way of greeting people and carries the exact same meaning as merhaba.

This is a religious greeting that originally comes from Arabic which some Turkish native speakers regularly use.

Keep in mind that if a native speaker greets you by saying Selamün aleyküm, the best response back to them is not by saying selamün aleyküm back at them. Instead, you can respond by saying aleyküm selam (and peace be upon you).

Selam originally means “peace” in Arabic. But in Turkish, selam is a shortened form of selamün aleyküm that Turkish speakers use as an informal and casual greeting, with the meaning “hi!”.

Turkish also has different greetings you can use at different times of the day. In the morning, for example, you might hear people say:

The word günaydın is made up of the words gün (day) and aydın (bright/clear), making it a perfect word for greeting someone at the beginning of the day!

Once it’s past noon though, you’ll want to switch the greeting to:

One thing to keep in mind when practicing speaking is that you’d only use tünaydın in the afternoon.

At the same time, you might also hear the following greeting throughout the morning and afternoon:

You can use iyi günler at any point during the day to greet people, so long as it’s before evening. That’s because once it becomes evening, you’ll want to switch the second word in the greeting so that you say:

Simply put, this means that you can use İyi günler (good day) and İyi akşamlar (good evening) not only to greet, but also to say “good-bye” at different times of the day!

Because of this, it’s pretty common to hear people enter a store by saying one of these two phrases, and exiting a store using the same phrase.

Unlike İyi günler (good day) and İyi akşamlar (good evening), you’d only want to use İyi geceler (good night) when saying farewell to someone at the end of the night, or right before you go to bed.

There is one other time-related greeting that’s useful to be able to recognise as you go about your daily life:

While it might be similar in meaning to İyi akşamlar (good evening), you’re more likely to use hayırlı akşamlar to wish a good evening upon someone.

It might take some time to pick up on the best context in which you could use this, so it’s good to follow a native speaker’s lead.

How To Say “How Are You?” In Turkish

There’s no question that in any conversation after first greeting someone, you might switch gears by asking how they’re doing. To ask someone how they are in Turkish, all you need to say is:

Nasıl means “how”, and -sin is a suffix in Turkish for “you”. The most common phrase in response to being asked nasılsın is İyiyim, or “I’m good”.

It’s also good to learn a slight variation on nasılsın, which is:

Unlike nasılsın, nasılsınız uses the suffix -siniz, which also means “you”, but is in the plural form. This means that you’d use nasılsınız to ask a group of people how they’re doing.

But also, it’s common to use the plural “you” in Turkish when speaking to someone who is senior to you (such as in the workplace), or people you’re meeting for the first time who are visibly older than you.

So depending on who you’re speaking to, you might choose to use nasılsınız instead of nasılsın.

This literally means “what’s here, what’s not?” in Turkish. But put together, it’s used to ask “what’s up” casually to someone. Alternatively, you could ask:

Naber is a shortened blend of the words ne (what) and haber (news), so you’re literally asking “what’s the news?”. Turkish speakers frequently use it everywhere to casually ask how things are going.

How To Say Goodbye In Turkish

Now that you know how to greet someone and ask how they’re doing, the last thing to nail down is how to say farewell. The most common way to part ways with someone is to say:

In Turkish, the literal translation for görüşürüz is “we’ll see each other again”, so it carries the meaning “until next time”. So, it’s most appropriate to use this if you’re pretty sure that you will see the person you’re speaking with again.

Alternatively, you could also use a more formal variation of görüşürüz, which is:

There’s another phrase that is used to say “good-bye”, which is:

The phrase carries the meaning for Allah or God to look after the person to whom you are saying farewell.

One thing to keep in mind if you do decide to say allahaısmarladık is that you’d only use it if you’re the person leaving a place and parting ways.

So, you wouldn’t want to say allahaısmarladık to someone who’s leaving your home after coming over – the person who is leaving would be the one to say it in that situation.

There is another phrase that the person leaving could say to the person remaining, which is:

Hoşça kal or hoşça kalın is used to say good-bye, but it’s close in meaning to “keep well”. So you might say it to the person who hosted you as you leave their party, event, or home.

You might now be wondering whether there’s any word for “good-bye” used by the remaining party. If you’re in that situation, you could say:

Güle güle is often considered a favorite greeting by many people who are learning Turkish for the first time. That’s because the literal translation for it is “from rose to rose”.

Güle güle is a go-to phrase you can use to say bye to someone who is leaving you, while you remain in the same place.

As you can see, there’s nothing that’s particularly difficult about learning the greetings itself. What might take more time though is keeping in mind the different contexts in which you might use one phrase to greet or say farewell to someone over another.

The only way that you can truly master using the right greeting for the right situation is to put yourself out there and get practicing!