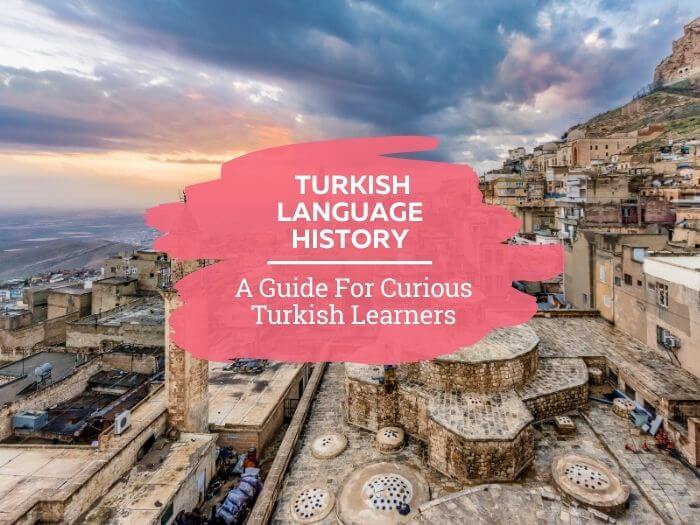 If you're learning Turkish, then get ready to discover the fascinating story of Turkish language history!

The journey of the Turkish language is exciting, from its beginnings in the Seljuk and Ottoman Empires to being the 15th most commonly spoken language in the world today!

I’ll dive right into answering your questions about Turkish language history, with questions like:

Not to worry, we’re here to satisfy your curiosity! Get ready to impress your friends and family with your knowledge of Turkish language history!

By the way, if you want to learn Turkish fast and have fun while doing it, I recommend Turkish Uncovered, which teaches you through StoryLearning®.

With Turkish Uncovered, you’ll use my unique StoryLearning® method to learn Turkish naturally through stories rather than boring rules. It’s both more fun and effective. What else could you ask for in language learning?

If you’re ready to dive in, click here for a 7-day free trial!

You might assume at first based on the word itself that Turkish language history starts in what is now modern day Turkey. But in reality, this isn’t the case at all!

The Turkish language may have its origins as early as 8,500 years ago, and is one of the many Turkic languages spoken in a wide geographical area spread across Europe and Asia.

Because of its history as a language spoken by a diverse range of nomadic groups, it’s hard to tell exactly where Turkish was first spoken.

That hasn’t stopped linguists from trying to discover the origins of the Turkish language though. Linguists think that the earliest form of Turkish (also known as proto-Turkic) was spoken somewhere between modern-day Mongolia and western China.

They think that from there, it spread westwards throughout Central Asia, and in time, all the way to Anatolia or modern-day Turkey.

The oldest Turkic inscriptions in the world are living proof! The oldest record of Turkic writing can be found in modern day Mongolia, in the form of Orkhon inscriptions, or Turkic runes, dating to around the 8th century.

The runes were found on statues created by a nomadic Turkic group called the Gokturks that inhabited modern day Mongolia at the time to honour two Turkic princes called Kul Tigin and Bilge Khagan.

Turkic runes look so similar to Germanic runes that you might even accidentally confuse them with one another if you didn’t know any better!

What Languages Are Similar To Turkish?

One of the keys to understanding Turkish language history is knowing which languages are similar to Turkish.

Turkish shares a lot of common words with languages like Arabic, Persian, and Greek.

But Turkish grammar is a lot more similar to other languages in the Turkic language family, like Azerbaijani, Turkmen, Kazakh, Kyrgyz, Uzbek, Uyghur, and other Turkic languages spoken in Siberia.

In the past, there’s been a lot of debate that Turkish might be part of the same language family with languages like Mongolian, Japanese, and Korean.

Some linguists in the past thought that because these languages share a lot of similarities in grammar structure that they might be part of one overarching Altaic language family.

These days, however, most linguists don’t agree with this idea, saying that even if there are a lot of grammar similarities, this doesn’t make these languages a part of the same big family.

How Does Turkish Spoken Today Compare With Past Versions?

If you look closely at Turkish language history, you’ll find that there were three distinct stages that it’s gone through in the past millennia.

So let's take a look at these stages of Turkish language history one by one.

Turkish language history began when Turkic languages spread all the way to modern day Turkey over the course of millenia through the gradual westward migration of Turkic nomads.

It isn’t clear when exactly the first Turkic tribes began arriving in Anatolia, but the Turkish language is most associated with the language spoken by the Oghuz Turkic groups who migrated across different parts of Anatolia between 900-1200 A.D.

These groups spoke Old Anatolian Turkish, and had already adopted the Arabic script as a means of writing.

The rise of the Seljuk Empire was the first example of an empire with Turkic origins that ruled in Anatolia, lasting between the 11th-12th centuries.  During this period, the rulers of the empire began working to institute Turkish as an official language in the region.

Old Anatolian Turkish finally received its status as an official language in Anatolia 1277, when Mehmet I of Karaman, a leader of the Karamanids, decreed that people in the palaces, divan, council, and on travels should only speak in Turkish.

Old Anatolian Turkish eventually paved the way to Ottoman Turkish starting in the 16th to 17th century. The Ottoman Empire was started by another Oghuz Turkic group, and came to prominence between the 13th-14th century after the fall of the Seljuk Empire.

The Ottoman Empire eventually founded its capital in Istanbul, and expanded throughout different areas of Europe, the Middle East, and North Africa. At the peak of its power, the Ottomans controlled a territory extending from Budapest to Mecca!

Words from other languages like Arabic, Persian, and Greek were so prominent in Ottoman Turkish that it outnumbered the number of words of Turkish origin!

This made Ottoman Turkish a literary language that was spoken more by the upper and elite classes and used more specifically for literature and writing records.

Meanwhile, the Turkish spoken by commoners continued to use fewer loan words from other languages and be more like Turkish spoken today. It was often referred to at the time as kaba (rude) Turkish.

In the years before the 19th century, the Ottoman Empire was increasingly competing with other European states for global prominence. This led to the empire looking to reform itself to meet the demands of the period.

The Ottoman Empire instituted Tanzimat reforms starting in 1839, a series of reforms that heavily westernized the empire. During this time, people began using more western words, especially from French. To this day, Turkish people use French words like asansör (elevator), lise (high school), and garson (waiter) in daily life.

After the fall of the Ottoman Empire in the early 20th century, the modern Turkish republic was founded in 1923.

This came with major changes to the Turkish language. Mustafa Kemal Ataturk, the founder of the Turkish republic, abandoned the Arabic writing system and decreed for Turkey to adopt the Latin alphabet for writing in Turkish.

This wasn’t all though. The new republic formed the Turkish Language Association in 1932 specifically to weaken the dominance of foreign loanwords and replace these words with the original Turkish equivalents.

These policies were a part of the “Turkification” of the republic and an attempt to “purify” Turkish of foreign elements, and ultimately helped solidify the republic’s new identity as a modern state that has cut ties with the former Ottoman Empire of the past.

For example, it was more common in the past to say isim (name) in Ottoman Turkish, which originally came from Arabic. But the language reforms led to more people using the word ad (name) instead.

At the same time though, the language reforms didn't always succeed in making people use the Turkish version of loan words. It’s because of this that modern Turkish spoken today still has a lot of words from Arabic or Persian.

For example, aile (family) originally comes from Arabic, and continues to be used more than ocak (family), the Turkish equivalent that the language reforms had pushed for the population to use.

There are also other European countries like Germany, France, Austria, and the Netherlands that have received large populations of immigrants from Turkey who continue to speak Turkish, making it a useful language to know even if you’re in Europe. Germany alone has about 1.5 million Turkish speakers!

Even though Turkey isn’t a member of the European Union (EU), Cyprus requested in 2017 for the EU to adopt Turkish as an official language.

So if you’re thinking about learning Turkish, why not give it a try! You won’t regret learning one of the most widely spoken languages in the world with Turkish language history that's both fascinating and unique.

If you do decide to start learning Turkish, then try the StoryLearning® method so that you can say good-bye to boring grammar rules and read all kinds of Turkish books to become a fluent Turkish speaker!