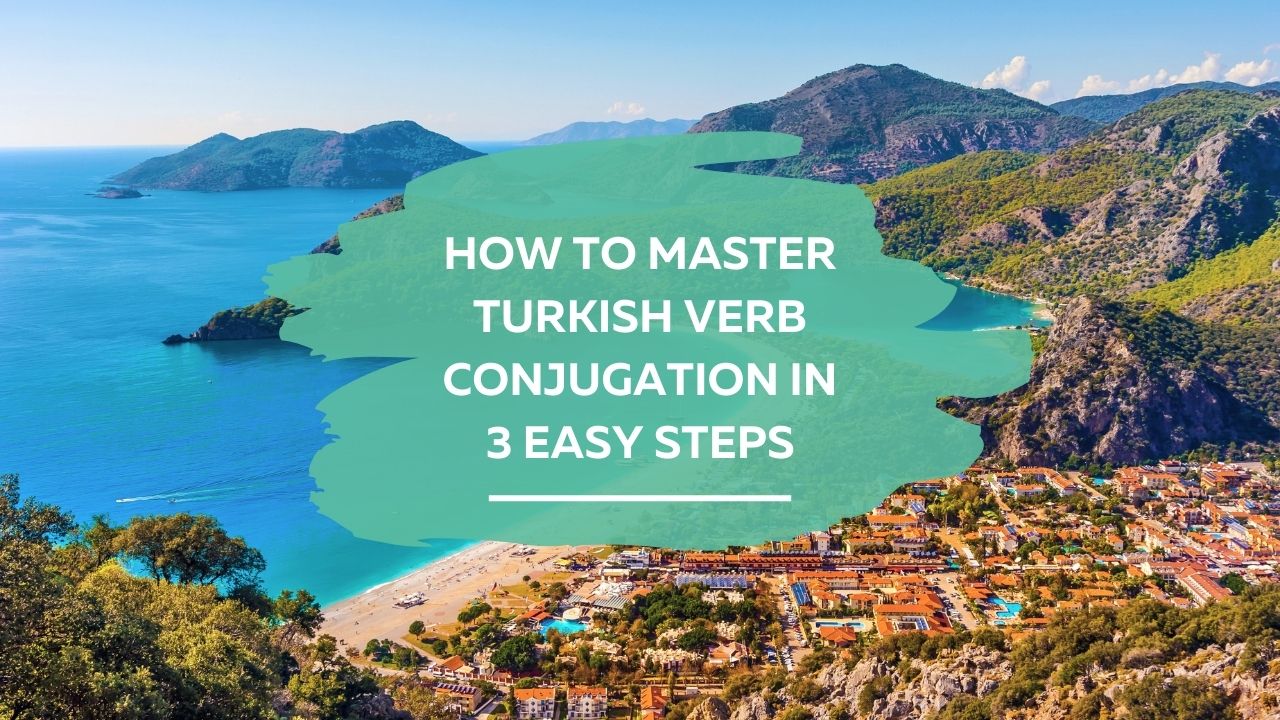 How To Master Turkish Verb Conjugation In 3 Easy Steps

Practicing how to properly conjugate verbs is one of the most important things you can do when learning any language and Turkish verb conjugation is no exception.

Verbs are the engine that drive a sentence and using them properly can help you communicate just about anything.

If you’re unfamiliar with the term conjugate, it simply means using a verb correctly for the tense and person you are referring to. We do this in English all the time. Perhaps the simplest example is the verb “to be.”

In English we say:

Learning to conjugate the verb “to be” is natural for native speakers. We don’t even think twice about it. But when you are learning a language, it takes time and practice to get to the same point.

In Turkish, there are several differences when it comes to verbs that are worth noting before we go any farther. The first thing you should be aware of is that verbs usually go at the end of the sentence.

This might feel tricky at first for an English speaker who is used to putting verbs earlier in sentences, but with time it becomes natural.

The second is that something called “vowel harmony” will come into play often when it comes to Turkish verb conjugation. If you haven’t mastered vowel harmony yet, now would be a good time to keep practicing.

Let’s get started with the three steps to mastering Turkish verb conjugation.

#1 Learn The Turkish Verb Endings For Each Person

Turkish has six different person categories that change the endings of the verb you are using. The six are:

A simple way to think about these six different persons is the first three are singular and the second three are the plural form of the same singular concept.

For example the plural of “me” is “we”. This is little different for English speakers because we don’t have a you plural (though in some places such as the southern U.S. y’all is a common you plural invention).

Now that you know what the six different persons are, let’s look at the endings for each. You should know that there are numerous variations based on the tense of the verb, so for now let's just look at the most common endings and speak to them generally.

Again, these are just the basic endings and most verbs will actually require a different ending than what is listed above. Instead, this list can give you an idea of what to look for. If a verb ends in an “m” it is talking about “I” or “me”. If it ends with an “n,” it is you, and so on.

Because verbs are conjugated this way, it means you don’t actually have to say who you are talking about. It is clearly stated in the verb already and can come across as redundant. Let’s look an example of this last point.

That is not the case in Turkish. Instead of saying Ben parka gidiyorum, I can simply say Parka gidiyroum. The “m” at the end of the verb indicates who is doing it.

#2 Learn The Endings For Each Turkish Verb Tense

As stated earlier, the endings for each person are helpful, but they change depending on the tense. Like English, Turkish has numerous tenses. And because Turkish is a language of many suffixes, each tense has its own suffix and way to conjugate the verb according to that suffix.

However, instead of looking at all the tenses, let’s focus on two of the most common: simple past and present continuous.

Here is the list of each person’s ending in the simple past tense:

At this point you might be thinking, “Eight ending possibilities for each person? This language is impossible!”

Don’t give in to despair. The reason there are eight possible verb endings per person has to do with vowel harmony. Vowel harmony means that the vowel of the suffix you add has to match the most recent vowel in the word you are adding the suffix to.

While this might sound confusing, it usually one the first things you learn (and master) when learning Turkish. Usually, within weeks it starts to become automatic.

How To Conjugate The Past Tense In Turkish

In Turkish, bakmak means to look. So if you were going to say “I looked”, meaning it happened in the past tense you would write:

This might sound daunting at first but it really starts to make sense quickly. Here is another example.

In Turkish, the word for sit is oturmak. Imagine you want to say “we sat”. Try to figure out which suffix you add to the root “otur” to properly conjugate this verb. Look at the “Biz” list of possible endings.

Did you keep in mind that “otur” ends with an “r,” a soft consonant? That means the suffix is going to start with a “d.” And the vowel in “otur” is “u” which means you need to use the suffix that has the “u.”

So the proper way to conjugate this verb is:

The best way to improve your Turkish verb conjugation skills is to practice. Choose a verb, pick a tense, add a person, and then figure out which ending it takes. Say it out loud and then repeat it.

Before long you will have no problem.

How To Conjugate The Present Continuous In Turkish

The good news is that the present continuous tense is much easier than the simple past tense to conjugate.

To conjugate a verb in the present continuous tense you follow this formula: verb root + –iyor + personal ending. The only thing that you need to keep in mind is that the “i” in “iyor” can change depending on the preceding vowel.

Here is the chart of endings for present continuous.

That’s right, there are only four endings per person and they are essentially the same. The only thing that changes is the “i” and that is to match the preceding vowel. Here are a few examples.

The verb yürümek means “to walk.” So if you want to say “they are walking”, you would conjugate the verb like this:

If you wanted to say I am reading, it would look like this:

In both of those examples the verb root ends in a vowel so you don’t even have to think about which vowel goes at the beginning of the suffix. If you want to use a verb that ends in a consonant, just choose the vowel that matches the preceding vowel.

By the way, the vowels are grouped like this:

Turkish is a very organized language. The best way to improve your conjugation skills is by using the StoryLearning® method and immersing yourself in stories in Turkish. That way, the conjugations will become second nature.

#3 Learn Which Turkish Verbs Are Dative, Ablative, And Accusative

In addition to conjugating a verb correctly you also have to make sure the verb you are using is interacting with the other parts of the sentence correctly. Turkish doesn’t make use of prepositional phrases very often. Instead, verbs are either dative, ablative, or accusative.

This means you get the “to,” “from,” or even “the” aspect of a sentence by changing the object of a sentence according to the verb. The best way to understand this concept is to look at some examples.

Dative verbs are those that have a “to” directional feel. The most obvious is “go” which in Turkish is gitmek. What this means is that in addition to conjugating the verb, you need to add an a/e to the end of the place you are going.

If you were going to the park it would be:

Other common dative verbs include vermek (to give), bakmak (to look), and göndermek (to send). Obviously there are many more. They key is to immerse yourself in Turkish so you pick them up.

Ablative verbs are those that carry a “from” connotation. There probably aren’t quite as many ablative verbs in Turkish as there are dative verbs. To use an ablative verb correctly you add a dan/den or tan/ten to the end of preceding word.

Two easy examples to consider are hoşlanmak (to enjoy) and nefret etmek (to hate). Sentences using these verbs could look like this:

By far the most common type of verb is the accusative verb. In fact just about every active verb that isn’t dative or ablative is accusative. In fact, in some cases dative verbs might also require you to follow accusative rules.

With accusative verbs you add an ı/i or u/ü to the end of the object.

Sevmek (to love) is a classic accusative verb.

Note that words might require what is a buffer letter in some instances (in the example above an “n”). Also, you only add the accusative ending if you are talking about a specific something. If you love something general you don’t put an accusative ending on it.

Turkish Verb Conjugation: You've Got This

That might seem like a lot to take in at one time. And in some ways it is. Turkish can be hard to learn.

But if you take Turkish verb conjugation one step at a time and practice personal endings, tense, and learning which verbs are dative, ablative, and accusative like you mean it, before long you should start getting the hang of it.

In the meantime, don't forget the power of daily immersion in Turkish. Watch Turkish movies on Netflix and switch on the subtitles to see verb conjugation in action.

Or why not read a short story in Turkish and absorb verb conjugation in Turkish as you read. That way you'll be using the most fun and effective method I know – StoryLearning®.