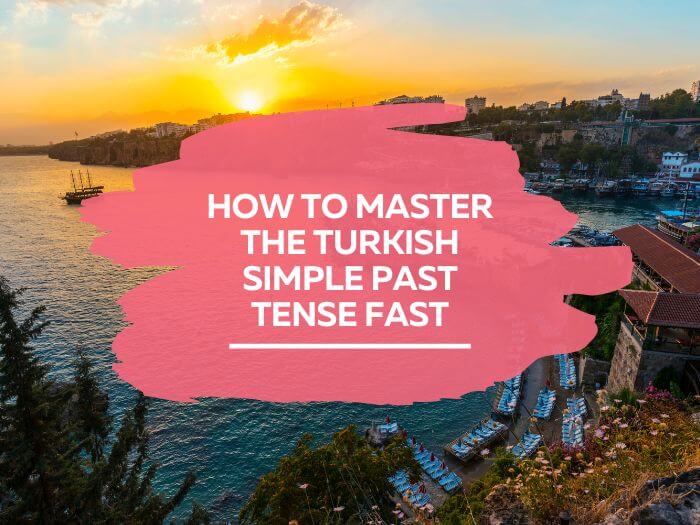 How To Master The Simple Past Tense In Turkish Fast

If you’ve started learning Turkish, you’ll no doubt eventually come across the Turkish simple past tense. But did you know that there are a range of different ways to express the past tense with unique, nuanced meanings?

Learning the past tense in Turkish might feel pretty daunting because Turkish is heavy on suffixes for sentence structure.

But luckily, the Turkish simple past tense follows a pretty consistent pattern! By learning the past tense, you’ll be conversing in the streets of Istanbul and with pals in no time.

So let’s dig right into learning how to form the Turkish simple past tense.

Before we jump into this post, I would like to recommend Turkish Uncovered, which teaches you Turkish through story in a fun and exciting approach.

With Turkish Uncovered®, you’ll be able to use the unique StoryLearning method to learn Turkish through stories, and not through rules or drills. It’s fun, easy, and effective!

In Turkish, all verbs have an infinitive form, which is the form that any verb takes before you conjugate and add new meanings to them.

In English, for example you might see phrases like “to come” or “to go”, all verbs that begin with the preposition “to”. These are all the infinitive forms of English verbs.

Now if you're looking to identify the infinitive form of verbs in Turkish, all you have to look for is whether the word ends in -mek or -mak.

The sounds that come before –mek or –mak will be the foundation from which you conjugate the verb, also known as the verb root.

You might wonder why some verbs end with -mek while others end with -mak. The answer is that the Turkish language is built on vowel harmony. This means that the vowels used before determine which vowel comes next.

There’s a simple formula that you can follow for this:

The Turkish simple past tense is the most simple way of saying that something happened in the past. To express a sentence in the simple past tense, all you need to do is add the suffix –di.

Going back to the four verb examples we shared before, here are some examples of how you might express them in the simple past tense:

You might be wondering why each of these simple past tense suffixes are spelt out in a different way. Again, the answer is in vowel harmony!

Here is a simple guide on vowel harmony for the simple past tense:

But hold on, you might also be wondering why sometimes, the suffix will start with the letter “d” while in other cases, it starts with the letter “t”. This is because of another phenomenon called consonant harmony.

Consonant harmony is where the preceding consonant in a verb determines the consonant that comes with the suffix.

While this might all sound really tricky, it really isn’t when you try to speak! When you sound these verbs out, you’ll likely find that these sounds will naturally flow out automatically and that it will feel right in your mouth. That’s the magic of vowel and consonant harmony.

Simple Past Tense With Different Pronouns

Now that you’re an expert on how to form a simple past tense verb in Turkish, you might be wondering how to conjugate this for different pronouns like “I”, “you”, “we” or “they”.

There are six different pronouns in Turkish, and each has a different rule for forming verbs. Like everything else in Turkish, it’s all in the suffixes.

What does this mean in practice? Well, here’s a simple table to make sense of this.

One of the most common mistakes for English speakers is skipping the pronoun suffix when forming a verbal sentence, since pronoun suffixes for verbs don’t exist in English. But this is incorrect and will be interpreted as a sure sign that you don’t understand Turkish.

Note that these two sentences don’t begin with sen (you) or biz (we) respectively. You can assume that these sentences refer to “you” or “we” by the pronoun suffixes alone.

Here are a couple more examples of sentences in the simple past tense. Do you think you can pick out the pronouns, verb roots, and the past tense and pronoun suffixes?:

Simple Past Tense In The Negative

You may be wondering at this point how you could say that you didn’t do something in the past tense, or how to form a simple past tense sentence in the negative. Thankfully, it’s pretty simple! And surprise, surprise: it’s time to introduce you to another suffix!

The suffix for turning a verb into the negative is –me/–ma. This is inserted in between the verb root and the past tense suffix, –di in a sentence. So the new formula becomes:

Let’s make sense of this by going back to the table shared before:

To help make better sense of this, here are the sentences from before that have been turned into the negative

Time To Practice The Turkish Simple Past Tense At Home!

As you can see, everything in Turkish comes down to knowing the right suffixes, including for speaking in the Turkish simple past tense.

While it may seem difficult to string together the different suffixes, all while paying attention to vowel and consonant harmony, you can set yourself up for success by following the simple formulas for forming sentences in the Turkish simple past tense.

Alternatively, skip the formulas and try sounding out these sentences yourself at home! By practicing sounding these sentences out, you’ll notice how these suffixes fall into place in your mouth.

Or better yet, use the StoryLearning method® to practice reading real Turkish texts, like Turkish books or short stories in Turkish, so that you can recognise the Turkish simple past tense and start forming your own sentences.