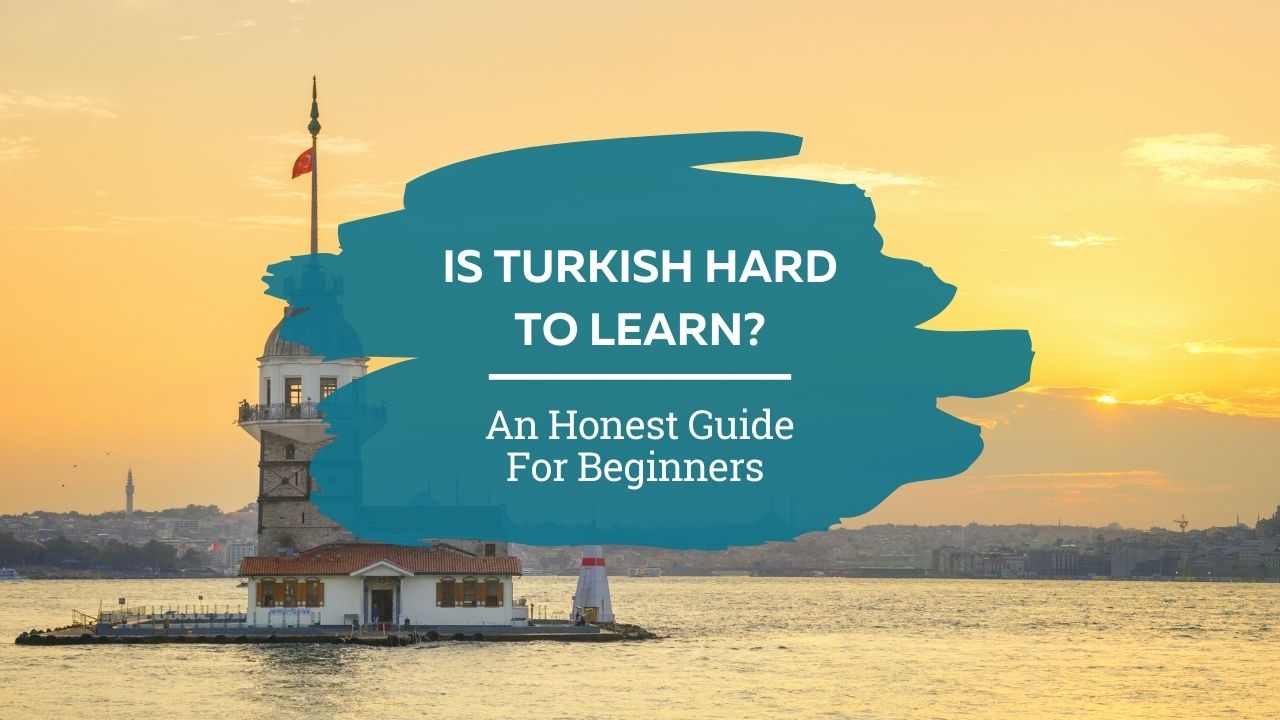 Is Turkish Hard To Learn? An Honest Guide For Beginners

Is Turkish hard to learn? If you're contemplating learning Turkish, you've probably asked yourself this question. Especially as you might be getting some negative feedback from friends, family, and even online articles.

It comes from a different language family than English. The vocabulary is too different. There is an endless number of suffixes. It’s not like other European languages which you can learn much faster.

The list of challenges grumblers and naysayers might point to is rooted in some amount of truth. Turkish does come from a different language family than English. And you might be able to learn French or German faster than Turkish.

But if you want to explore Cappadocia or revel in the Hagia Sophia, or simply have a great conversation with any one of millions of friendly Turks, you need to learn Turkish.

In fact, Turkish is a great language to learn not only to be able to interact with Turks but to unlock key understanding from other Turkic languages such as Azerbaijani and Turkmen. In fact, if you speak Turkish you can probably communicate reasonably well with a person from either Azerbaijan or Turkmenistan.

And there are several things going for you that make Turkish very manageable to learn as long as you are willing to put in the time and effort. Three of the most helpful things we will look at in more detail include:

You can thank Mustafa Kemal Ataturk for the modern Turkish alphabet. At the conclusion of World War I, when the Ottoman Empire was in shambles, Ataturk unified what is modern Turkey and established the Turkish Republic in 1923.

As part of his sweeping changes, Ataturk wanted his new country to be more modern and more European.

One thing he ordered to help that happen was the changing of the alphabet from an Arabic-like script to a Latin alphabet. This, perhaps more than anything else makes learning Turkish very doable. Especially for those who are visual learners and like to see the word as they hear it.

There are, of course, a few differences between the English alphabet and the Turkish one. For example, in English we have 26 letters whereas in Turkish there are 29. But in reality, there are dozens of English phonograms and about a million exceptions. Turkish isn’t like that at all.

A Look At The Alphabet

Here is a quick glance at the Turkish alphabet.

As you can see the alphabet is very similar to English with only a few differences. For one, Turkish has the “Ç” to take place of the “ch” phonogram in English. And the “Ş” to replace “sh.” It also has the “Ğ” which actually doesn’t make a sound but merely elongates the words it is in.

Finally, you will notice that some of the vowels are different like the “Ö” and the “Ü.” Those letters merely represent a slightly different pronunciation of an “o” and a “u”. You pronounce them from the front of the mouth with the lips pursed tightly.

Other than that there are only a few letters from English that are missing like the “q,” “w,” and “x.”

Regardless of those differences, having an alphabet that is very similar to English that you can see and understand from day one makes learning Turkish so much easier than it otherwise would be.

The other amazing part of the alphabet is that each letter makes only one sound. And it makes that sound just about always. There might be a few exceptions. But as a language learner, you don’t have to worry about those and can basically think of each letter making one and only one sound.

When you stop to consider how easy that is compared to English with its nearly endless list of rules and phonograms and exceptions it's really quite remarkable. It makes spelling and pronouncing words so easy that after a few hours of study it's automatic.

Now some of the letters make different sounds than they do in English. So you'll still have to make sure you match the correct sound to the correct letter in your mind. For example, the letter “c” in Turkish makes the “j” sound every time. That might take some getting used to.

Another example is that the letter “i” in Turkish always says the long “e” sound. However, once you get that sorted out in your mind it really takes care of itself. And every time you are in Turkish mode you will say the right sound for each letter every time you see it.

Turkish Is A Very Systematic Language

The final factor that makes learning Turkish easier than you might think is that it is an extremely organized, systematic language. The language has its rules like any other language and very rarely do you deviate from them. This is the case with the letters making only one sound and it is the case with sentence structure.

Generally speaking, the correct way to make a sentence in Turkish is by saying the subject first, then the object, and finally the verb. While this order can be tricky because the verb is at the end and in English we often put the action words earlier on in our sentences, over time it becomes quite natural.

Like other languages, Turkish has its core of common words that are used on a daily basis. That means by memorizing and learning 500-1000 targeted vocab words you can communicate a lot. What allows you to do so are the language’s many suffixes.

The suffixes in Turkish are what scare people the most. And it is something that takes time to adapt to. It's true that when speaking Turkish you can add suffix upon suffix upon suffix to change the meaning of the word. While that takes getting used to, it means learning the root word is incredibly important and helpful.

Let’s take a look at an example.

A sentence we might say in English is “I am at your service.”

In Turkish, because of the ability to add suffix on top of suffix, this sentence actually becomes a single word. First, you need to know that hizmet means service. This is the root word and it goes first.

In order to say “you” in Turkish, you can add iniz. So now we have hizmetiniz (note that I am using the plural you because that is more formal).

Then we need the “at” or “on” conjunction. In Turkish, it is da/de ta/te. So now our word is hizmetininzde. You could stop there and it would mean “at your service.”

When we add the me suffix, which at its most basic is an “m” but can also include an “um” or “im” depending on the situation, we get hizmetinizdeyim (the ‘y' is added as a buffer between the two vowels).

As you can see we added three different suffixes to change the meaning of the word “service” to mean “I am at your service.” You add suffixes in Turkish to change tenses in verbs or denote possession. And for just about everything else too.

While this takes time to get used to, once you have practiced it for a while, you are able to automatically read words you don’t even know and understand them because you know what each block of the word means. This means that you can easily apply the fun and effective StoryLearning® method to learning Turkish!

Is Turkish Hard To Learn?

Just because Turkish might take more time for English speakers to learn than French or other European languages doesn’t mean it isn’t worth the time and effort. It definitely is.

And with its easy-to-read alphabet, consistent phonetic pronunciations, and organized structure, it isn’t as hard to learn as many other languages.

As you begin your Turkish learning journey, here are three tips to maximize the time and effort you put in.

Turkish takes time and effort. But it is well worth that time and effort. And if you focus on vocab, listen to plenty of Turkish, and persevere, you will be speaking like a Turk in no time.