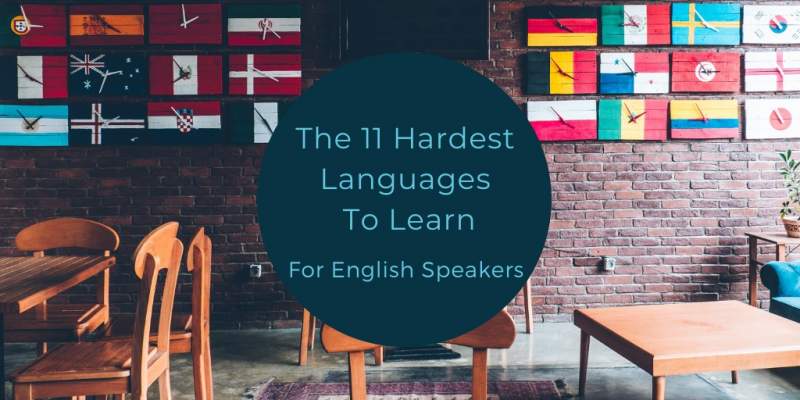 The 11 Hardest Languages For English Speakers To Learn

Have you ever wondered what the hardest languages to learn are?

For whatever reason, if you’ve ever wondered about which languages are the most difficult to learn – for speakers of English, at least – here are 11 of the very toughest.

(But don't be put off! Get a free trial of the StoryLearning method and you'll see how to learn with stories… not rules.)

For a quick overview, check out the video below. And continue scrolling to discover the specific difficulties of each language. And some aspects that aren't quite as bad as they seem! Plus tips to overcome the tricky parts of certain languages.

Standard Chinese – ‘Mandarin’ – is often cited as the most difficult language for English speakers to learn. As it happens, I disagree. But it’s certainly a big challenge.

The main problem lies in the writing system. And if you’re serious about learning Chinese, you’ll have to tackle Chinese characters. You need about 3,000 to read a newspaper. And a university-educated native speaker will know about 8,000.

Another hurdle is the four tones: Chinese is a tonal language, and words have different meanings depending on the intonation. For example, mai with a falling tone means “sell” (mài卖) – but when pronounced with a tone that falls and then rises, it means “buy” (măi买).

However, there are a few reasons why Chinese is not as hard as its fearsome reputation might suggest. Most Chinese grammar is actually extremely easy – albeit very different from English grammar.

And because it’s now such a popular language to learn, there are almost limitless resources to help you. Including:

I told you Chinese wasn't so bad!

If you think standard Chinese is testing, try Cantonese. While Mandarin has four clearly defined tones, unbelievably, nobody really knows how many there are in Cantonese. It’s somewhere between six and nine, depending on who you ask.

Since most people study standard Chinese, there are far fewer resources for learning Cantonese. And if you learn it in Hong Kong, you’ll also have to deal with traditional Chinese script rather than the simplified version used on the mainland.

However, many overseas Chinese are Cantonese speakers, so you stand a good chance of finding someone to practise with.

And if you really put your mind to it, you can even learn Cantonese in one year, like I did. In fact, that experience inspired me to create Cantonese Conversations, the first comprehensive library of raw, authentic material to help you master real Cantonese.

If you want to try getting your tongue round a language that’s devilishly hard to pronounce, Vietnamese could be the one for you.

It features six tones (two of which are particularly tricky), a large number of vowel sounds and several sounds that are unlike anything in English.

Northern Vietnamese is also quite different from the Vietnamese of the south, adding another layer of difficulty.

One positive is that modern Vietnamese is written in a version of the Latin alphabet. That said, there are quite a few extra accents and tone marks that you will have to contend with.

Thai is another tonal language, although its five tones are relatively easy to master. However, unlike Vietnamese, it’s written in its own unique script. And Thai writing is a particular challenge.

The large number of letters is not the biggest issue (there are 44 consonants and 15 vowel symbols). But some sounds have more than one letter. And you need to remember which one is used in any particular word.

For example, ศ ษ ส and ซ are all the equivalent of the letter ‘S’, but สวัสดี (‘hello’ in Thai) is written with ส and not one of the others.

There are also some complicated spelling rules concerning tones. And then there’s the fact that vowels can come before, after, above or below the consonant.

On the other hand, most of the grammar is quite easy, so at least there’s that!

I did a two-week mission to learn Thai a few years ago. Want to see how I did?

Japanese has a reputation for being one of the world’s hardest languages, and for good reason. Japanese has not one but three scripts you need to learn.

Much more difficult is Kanji, a system based on Chinese characters, of which several thousand are in common use.

However, once you’ve got the writing system down, Japanese pronunciation is quite easy, and the grammar is only ‘medium’ – so what’s to worry about?

Speaking of which, I've created Japanese Uncovered, a story-based course that'll take you to conversational fluency in Japanese, without stressing about the alphabet and the grammar.

To the beginner, Arabic might look totally impenetrable due to its exotic script. But apart from the fact that vowels are often omitted and one or two other complications, the alphabet is not so difficult to learn.

Unfortunately, the writing is just the start. Arabic has some pretty tough grammar to get to grips with. And some of the sounds will need practice.

There are also many distinct dialects of Arabic, with the Arabic of Egypt being very different from the Arabic spoken in Saudi Arabia, for example.

You can pick up my Short Stories for Beginners in Arabic to help you too!

Hindi is another challenging tongue for speakers of English to learn for many of the same reasons as Arabic.

There’s a new alphabet to tackle, there are some sounds that will require work. And there’s some tricky grammar to master.

The big advantage is that, with around 120 million native speakers, you won’t be short of partners to practise with.

Russian is written in the Cyrillic alphabet. But in reality, that’s no problem. You can learn to read and write Russian in only a few days. What’s more difficult is the grammar.

There are a few peculiarities, such as the fact that Russian doesn’t use the verb ‘to be’ in the present tense. But the biggest challenge is the cases.

‘Cases’ are where words change according to their role in the sentence. Russian has six of them, and you need to know three just to tell the time.

However, once you master these – along with some peculiar syntax (for English speakers) – you’ll be well on your way to learning this rich and extremely useful language.

Two useful resources for you:

Czech is a language that lulls you into a false sense of security. But although it’s written in the Latin script, don’t let it fool you – it’s a notoriously tough tongue to conquer.

To the untrained ear, it’s easy to mistake for Russian. And like Russian, it makes use of cases – this time, seven. It also has no fewer than FOUR genders, so expect Czech grammar to drive you nuts.

Then there’s the pronunciation. Some sounds in Czech are impossibly hard to reproduce, particularly the ř sound. Considered by many to be the most difficult sound in any European language, even Czech children have to be taught how to pronounce it in school!

If you’re not fazed by Russian or Czech, try Hungarian. Like the tones in Cantonese, the number of cases in Hungarian is disputed – 18, 21 or even 26 are all figures that have been touted.

However, what’s beyond doubt is that Hungarian grammar is among the most mind-bendingly difficult in Europe.

Hungarian is also extremely idiomatic. So even if you understand every word in a sentence, you may still be left with very little idea about the meaning.

Another Asian language, Korean is difficult for different reasons. Yes, it has an odd-looking script that resembles a game of Tetris. But it’s actually one of the most perfect writing systems ever devised. You can learn it in only a few hours, making reading and writing Korean very easy.

Unfortunately, this language isn’t going to do you any other favours. And if you attempt to learn it, you can look forward to formidable grammar, unfamiliar sentence structure and a language that is heavily influenced by the country’s culture.

That said, I managed to learn Korean in 4 days when I participated in the creation of the Korean Michel Thomas course. I'm far from fluent, but I certainly got some of the basics down in a short time.

What Makes A Language Difficult To Learn?

You'll have noticed that some linguistic features crop up several times in this list.

And their presence in a language can give you a good indication that learning it is going to be hard work.

Taking on a more unusual language can also contribute to the difficulty rating since if you don’t have materials to learn from and people to practise with, making progress won’t be easy.

What's The Hardest Language For YOU To Learn?

At the beginning, I inserted the proviso ‘for speakers of English’, and this is also very important. Languages that are closely related to your own are generally much easier than more distant tongues.

So the list of the most difficult languages for a native Chinese speaker, for example, would be very different.

Finally, the other major variable is you, because everyone is different. While some people might go crazy trying to master tones, others may consider cases to be their bête noire.

Personally, I find Chinese tones much easier than German grammar. But that’s just me.

For these reasons, making a list of the ‘hardest’ languages in the world is a subjective exercise. And I could have easily included many others (Finnish and Turkish only just missed out).

But don’t worry – if you’re looking for something to occupy your free time, any of the languages in this list is guaranteed to keep you busy!

My final word is that no language is impossible if you know how to go about learning it.

If you try to learn Chinese, Japanese or Russian, as long as you practise every day, the difficulty of the writing, the tones or the cases will quickly disappear.

However, even if you study one of the so-called ‘easy’ languages but only practise once a week, learning it will be a long, hard battle.