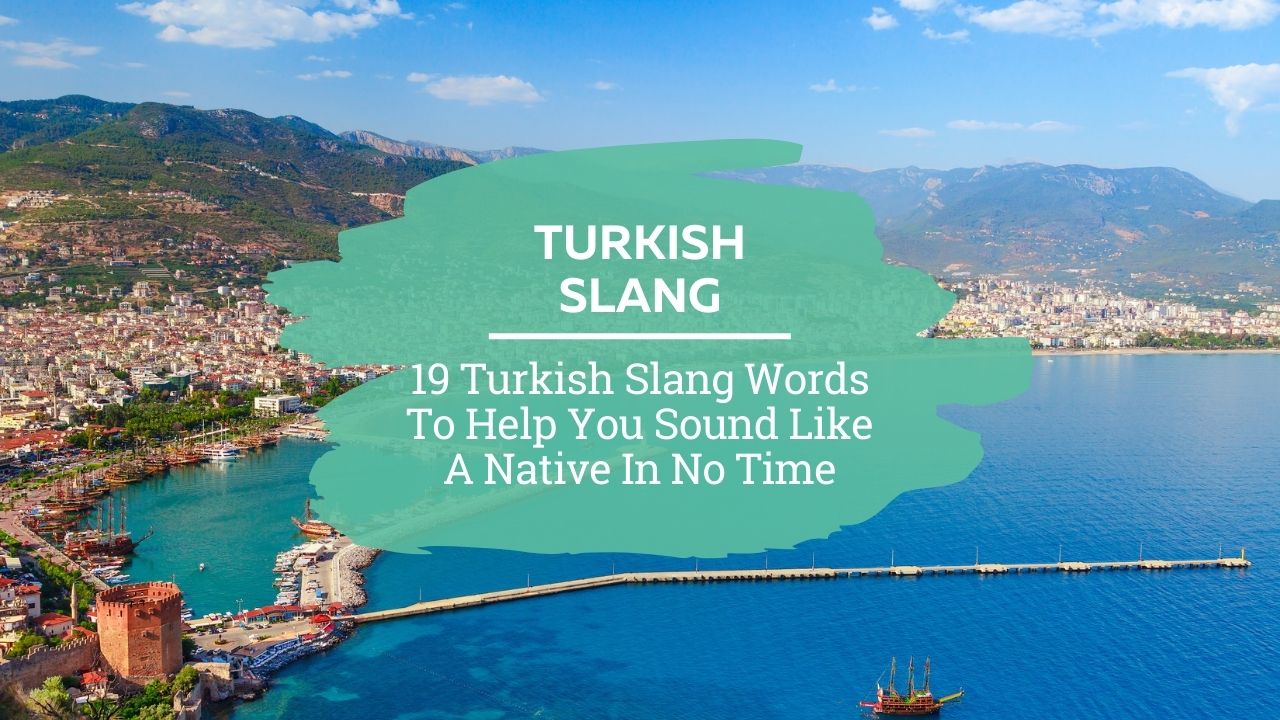 Learning Turkish or any new language like a local requires understanding the grammar of Turkish, focusing on pronunciation, and learning tons of vocabulary words.

However, if you really want to impress the Turks you talk to and with, it is also a good idea to learn some of the most common Turkish slang words. This shows that you not only know the language but you know and understand more about the culture.

Slang words are popular in every language. While they may be less formal that regular words, used correctly, they communicate a warmness and approachability that is endearing to Turks.

Of course you don’t want to devote all your time to learning slang lest your Turkish ends up sounding awkward. But once you have reached a certain level of proficiency, brushing up on some of the most common Turkish slang is a great idea to make you sound more like a Turk.

Slang Grammar: Create Your Own Words

To use this grammar you take a word and say it twice. What makes the phrase slang is that you replace the first letter of the second word with the letter “m.”

Here is an example:

The English translation gives you the idea of what the Turkish sentence is trying to communicate but it is far from a literal translation.

Notice that “maram” looks the same as “param” (para which means money plus the “m” at the end to signify it is mine) but it starts with an “m”.

Maram is not a word in Turkish, but when used in this way (with an exasperated tone) communicates you emphatically don’t have any money.

You can create your own slang words with this grammar. Have some fun with it and try it out with your Turkish friends.

Tuz is the Turkish word for salt and when you add the “lu” suffix it means literally with salt. It is the way in Turkish to say something is salty.

But when it is used as a slang word it means something different. Here is an example:

As a slang word, tuzlu means expensive. Notice in the example we are talking about a restaurant so make sure you pay attention to context. Is the food at the restaurant salty or is it expensive? Either way, you could say its tuzlu.

A common way to make up slang words in English is to shorten words. Totally becomes “totes” and adorable “adorbs.” One example of the same type of thing in Turkish is the word efso which is short for efsane meaning legend.

This might be used among friends as they joke around about each other being legendary.

In Turkish the word inek means cow. For some reason, the same word is also used to describe a person or student who is bookish and studies all the time. Basically, as a slang word it means nerd.

You probably already know that the word çocuk means child. It can also be used as a slang word. And while it still really means child, it could be considered slang because the person you are calling a child is clearly not a child!

It might be used by friends and they are “ribbing” each other.

Another example of shortening a word to create a slang word is kanka which is short for kankardeş which means blood brother. It is used between close friends.

Similar to kanka and a word that you should only use with your close friends is lan. It is really a place holder word and might mean friend or it might just be a way to start or end a sentence.

It is on the verge of being overused by many Turks so be careful with it.

The word kıro is fairly derogatory and loosely means something like redneck. It is someone who is uneducated and backwards.

As a noun ekmek (bread) is one of the most basic words in Turkish. As a verb ekmek means to plant or sow. But as slang it means to stand someone up or to ditch your plans with them.

In Turkish there are a few words that can mean something is free. Bedava, ücretsiz, and ikram can all do the job depending on the situation. The slang word beleş (which is derived from bedava) can also mean free.

The slang word sayko is actually just the Turkish way of saying and writing the English word psycho. It has the same meaning as its English counterpart.

The word vallah is a holdover from Turkish’s Arabic past and means something along the lines of “really” (as in Really?)

The word matrak is used to describe people or things that are fun or amusing.

When you feel like you are done for or doomed you can use the word yandık (literally meaning we are burned).

It might come in handy when a mad situation occurs like when you haven’t studied for a test or you have unexpected guests coming and you are unprepared for them.

A çakal is a coyote (or weasel) and is used as the slang word for someone who is deceitful or tricky.

Dandik is a simple slang term that is used to describe things that are of low quality. If you are fed up with your computer or phone because it is old or not working well, this term would clearly communicate your frustration.

If you or someone you know is keriz it means you or they are a bit naive or easily tricked. Because of the culture of haggling for prices in Turkey the term can be helpful.

Sazan is a type of fish (carp) but when it comes to slang it means a person who believes everything they hear.

This slang phrase is interchangeable with the English Are you kidding me? (Said in a rhetorical, frustrated way). It means you don’t like what you're hearing.

When you are new to a language you are sure to make mistakes. The same is true when it comes to Turkish slang.

While using these terms and others like them can be endearing and make you sound like a native, they come with some risk. If you use them at the wrong time or with the wrong person you could end up offending someone (which is a big deal in Turkish culture).

Your best bet is to practice them on your own, get them down, and then try them out with a trusted friend who will be gracious with your mistakes. Only then can you use them in your everyday interactions without worrying about saying the wrong thing.

You can also apply the StoryLearning® method and use immersion in Turkish through stories as a way to internalise the most common slang words so you can use them the right way.