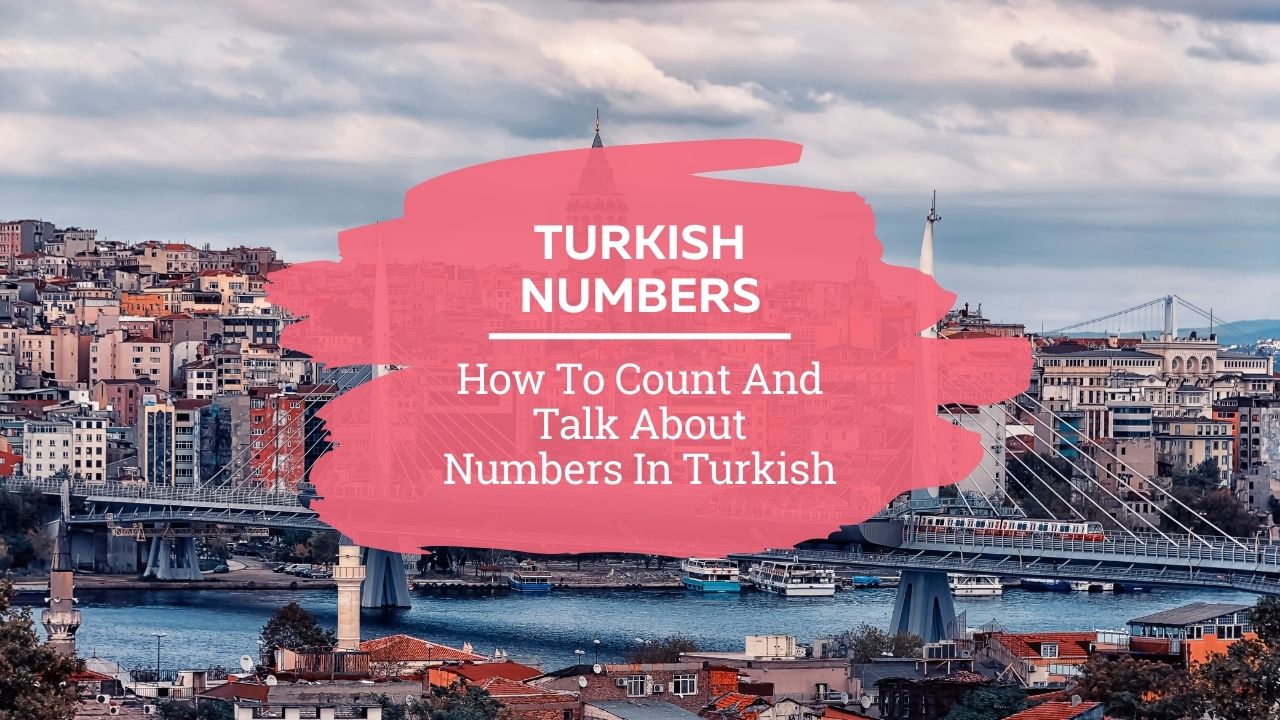 Turkish Numbers: How To Count And Talk About Numbers In Turkish

When you learn Turkish, you need to learn tons of new words, including Turkish numbers.

And while learning to count to ten is often one of the first and easiest things any language learner does, things can get a bit trickier when you start counting past ten. And when you include things like ordinal numbers.

Numbers can be a little different in Turkish, so in this post, you'll learn all about the particularities of Turkish numbers. By the end of it, you'll be able to count and talk about numbers in Turkish with ease. So let's get going!

Why Numbers Can Be Tricky

That’s right, while you might not think about it in English because it comes so naturally, there is actually more than one kind of number and some numbers don’t follow numerical patterns.

For example there are cardinal numbers (what you think of as regular numbers like one, two, three, etc.) and there are ordinal numbers (first, second, third, etc.). There are also words for numbers that start a new set of ten that contain their base number (like sixty) and those that don’t (like twenty).

As a native English speaker you probably take for granted that one is the equivalent of first, two goes with second, and three goes with third. You also know intuitively that that twenty is the second set of tens even though the number two is not in the word. It’s obvious right?

Well for English language learners it’s actually not. When you look closer you see that one and first are actually two completely distinct vocabulary words. They have almost nothing in common. You have to intentionally commit to memory that one equals first and and that thirty is related to three.

And it's not until six and sixth that you get it consistently, all the way through tenth. The same goes for the numbers that start a new set of ten. You have to wait until sixty to get consistency.

Then of course there are the abbreviations of these ordinal numbers which are like vocabulary on their own (1st, 2nd, 3rd, 4th etc.). For someone learning English, it takes time and intentionality to know all of this.

That’s because there are simple rules you follow with ordinal numbers that make each one an obvious extension of its cardinal counterpart.

How To Count To Ten In Turkish

But before we get to the ordinal numbers, lets learn how to count to ten and then one hundred in Turkish .

The best way to get a handle on counting is to just practice it over and over again until you have it down pat. The good news is that once you have the first ten numbers down you will be very well prepared to learn to count as high as you want.

This is not necessarily the case with English where 11 and 12 have their own words and are not part of a numerical pattern.

In Turkish though, the formula for saying a number is saying the ten place first followed by the ones place. For example, eleven is on bir. You say on for ten and bir for one meaning “ten one”, or eleven.

Nineteen then, is on dokuz. This simple formula is true for counting basically as high as you want to go, with only one more thing to mention.

Multiples Of Ten In Turkish

One area where Turkish is like English is that some of the first numbers in a new set of ten are their own vocabulary words, meaning they don’t follow a numerical pattern.

In English twenty, thirty, and fifty are their own vocab words and don’t really contain their word for the number they are based on (two for twenty, three for thirty, and five for fifty). They are close but not exact, whereas the rest of the numbers that start a new set of ten (forty, sixty, seventy, eighty, ninety) contain the word exactly.

Turkish is actually a bit more complex on this point than English because just about every new set of ten requires you to memorize a new word.

As you can see some of the latter numbers contain an indication of its corresponding base number (altı and altmış, yedi and yetmiş, sekiz and seksen, and dokuz and doksan).

But essentially there is no pattern and these are words you just have to memorize. But once you do, saying any number you want is easy as you just say the tens place number followed by the ones place number.

Fifty three is elli üç, for example. To master saying these numbers simply practice over and over again taking any tens place number and any ones place number and say it several times. Before long it should be fairly easy.

Counting To 100 And Beyond In Turkish

The good news is that there are only a few more words you need to learn in order to say any number you want. Here they are:

Let’s assume for now that being able to count to a billion is enough for a beginning Turkish learner. If you want to say any number you start with the highest number place and say each number down to the ones place.

You follow this pattern as high as you can go in counting and saying numbers. While it takes a little effort to learn the vocab words, the pattern makes counting a breeze before long.

The reason for this is because all ordinal numbers in Turkish contain the word of the number itself. The only thing you do to make a number ordinal in Turkish is add the ending inci/ıncı/uncu/üncü.

If that four way ending scares you it might mean you need to take some more time reviewing vowel harmony. Vowel harmony is one of the basic tenets of Turkish and every ending you add in Turkish (which there are tons of) relies on it.

If you feel you are ready to continue with ordinal numbers here is what each looks like:

If you are wondering what happens to the first number in each new set of ten it is the exact same. You take the number and simply add the appropriate vowel harmonized ending.

Instead of showing you all of them here are two examples:

The same is true for hundred, thousand, million, and beyond. It is true for every number without exception. This makes saying the correct ordinal number easy to learn and execute.

How To Abbreviate Ordinal Numbers

There really is no need to show you all of them because they are all the same. If you are trying to write any of these words (or read them) you simply put or look for a period after the number. It’s that simple.

A Note On First In Turkish

Before I wrap up this post on Turkish numbers let's look at one common mistake Turkish language learners make.

So while you would say birinci sınıf for first grade you would say ilk gün when talking about the first day of school. This can be a little tricky to get used to, but with practice it begins to feel natural.

How To Learn And Use Turkish Numbers

Learning numbers and counting is an important part of any language. The best part about learning them in Turkish is that they are logical, systematic, and with a good effort very manageable.

One way to learn them is to write them out, say them over and over again, and even work them into your Turkish conversations. But here at StoryLearning®, my fun and effective method that teaches you through stories, not rules is all about immersion, especially in books.

So, immerse yourself in short stories in Turkish and look out for the numbers as you read. You'll also spot them when you watch Turkish movies on Netflix. Thanks to this exposure, you'll start to feel more comfortable counting in Turkish.

And if you find yourself making mistakes, don’t be discouraged by the fear villain. It takes time to learn numbers in a new language, especially when they are so ingrained in your native language.