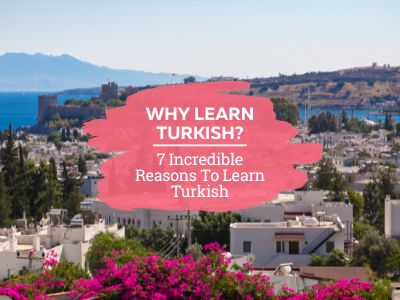 There’s no doubt that there are no good reasons why you shouldn’t learn a new language.

Learning a new language not only gives you a lot of benefits. It also expands your worldview by helping you explore new parts of the world and communicate with people you otherwise never would have been able to speak with.

But you may ask, why learn Turkish specifically?

You may have noticed that people who pick up new languages around you are focusing on learning languages like Spanish or French that are taught regularly at schools. But honestly there are a lot of good reasons to learn a language like Turkish.

What are these reasons, you may ask? Well, here’s a list of 7 great reasons why you should think about taking up Turkish.

There’s a variety of excellent reasons why you should consider Turkish, be it the culture or history, among other reasons. So there’s no doubt that one of these reasons will apply to you.

So why learn Turkish in particular? Keep scrolling to learn more!

Before jumping into these reasons, I highly recommend learning Turkish through the Turkish Uncovered course by StoryLearning®.

It’s a great way to learn language through immersion and stories, rather than through passive grammar lessons.

Learn more about the course and start your free 7-day trial.

1. Turkish Is Spoken Across The World!

You might assume that Turkish is only spoken in Turkey, where Turkish gets its namesake. But the reality is that you'll hear Turkish across the world!

First off, Turkish is one of the top 20 most commonly spoken languages in the world. The population of Turkey alone is 84 million, where Turkish is the official language.

But beyond Turkey, Turkish is an official language in Cyprus and Northern Cyprus. It is also spoken widely by people of Turkish descent in countries like:

You might also assume that Turkish is only spoken in countries that are geographically close to Turkey.

However, Turkish is also very commonly spoken in other countries with high populations of immigrants from Turkey. In fact, Germany alone is home to 1.5 million Turkish speakers!

All things considered, Turkish can actually be a very useful language to know if you are trying to travel through or work in any one of these countries.

2. Easier To Learn Other Languages

Can Turkish can be a really useful language to know for if you’re trying to pick up other languages? Absolutely!

Turkish grammar and Turkish vocabulary has a lot of similarities with other Turkic languages, like Azerbaijani, Turkmen, Kazakh, Kyrgyz, and Uyghur.

Because of this, Turkish can be a great language to know if you’re traveling or working in countries in Central Asia.

This is especially the case if you aren’t familiar with these other languages and other commonly spoken languages in Central Asia, like Russian.

The Turkish language also features a lot of loan words from languages like Arabic and Farsi. So knowing Turkish gives you a leg up if you decide to learn these languages as well!

Did you know that Turkey is one of the most interesting, exciting, and fascinating places for travel? Knowing Turkish makes it that much easier to travel across Turkey.

Turkey is regularly rated as one of the best places to travel because there is a little bit of everything to please any traveller. In fact, it ticks all of the boxes for any avid traveller!

Istanbul in itself is a great travel destination nestled in both Europe and Asia, with impressive historical sites like the Hagia Sophia, the Blue Mosque, and Galata Tower, and a great nightlife.

If cities aren’t your thing, then you can’t go wrong with traveling to cultural destinations like Cappadocia and Pamukkale. Or going to Turkey’s coastline to enjoy the beautiful blues of the Mediterranean and Aegean seas.

But there are also a lot of fascinating places that are less frequented by travellers that are cradles of history like Midyat, Göbeklitepe, Doğubayazit, and the Sümela Monastery, where knowing some Turkish can go a long way for easy travel.

Most importantly, Turkish hospitality makes traveling in Turkey one of the best travel destinations in the world! Knowing some Turkish can help you to communicate with locals over a cup of freshly brewed çay (tea).

Did you know that Turkey is home to some of the oldest civilizations in the world? Learning Turkish can give you a lot of insight into one of the most historically rich places in the world.

What is today considered modern-day Turkey has seen a host of civilizations and empires come and go over history, whether it be the Ancient Greek, Roman, Byzantine, Selcuk, and Ottoman empires.

Each of these civilizations have left a huge mark on the culture of Turkey today. So learning Turkish can be one way of accessing and learning more about this history through first-hand accounts written by famous travellers like Evliya Celebı.

With Turkish, you can also equip yourself to read all about the formation of the modern Turkish republic. And its more recent history as a geopolitical player.

Besides history, learning Turkish can open you up to a world of literary masterpieces from authors and poets like Orhan Pamuk, Elif Safak, Yasar Kemal, Ahmet Hamdi Tanpinar, Sabahattin Ali, Nazim Hikmet, and Orhan Veli.

So if you’re a history or literature buff, then Turkish should be high on your list of languages to learn!

5. Turkish Prepares You For Business And Trade

Here’s a lesser known fact: Turkey is home to the 19th largest economy in the world! This makes it a great language to know for doing business or trade in a range of sectors.

Turkey is a dominant player in the textile and industrial sectors. So it's a great language to know if you are looking to trade goods like clothes, home appliances, car parts, or work in construction.

It’s also very dominant in the agricultural and services sectors, especially in tourism and health care, making it a great place for doing business.

Even if you don’t plan on going into business or trade in Turkey, knowing a less commonly studied language like Turkish can also help you advance your own career and stand out among a pool of candidates in the job market.

Turkish is not just home to a lot of history and culture, it is also a huge exporter of culture.

In recent years, it has been a huge exporter of TV. And you could even say that Turkish TV has taken over the world! Knowing Turkish can be great for accessing this world of television.

You may not realize it, but Turkey is the second largest worldwide distributor of TV. And Turkish dizi (shows) are regularly watched by audiences in Russia, Eastern Europe, Latin America, the Middle East, Central Asia, and East Asia.

With very episode typically lasting longer than two hours, popular Turkish dizi like Muhteşem Yüzyıl (Magnificent Century) and Diriliş Erturğrul (Resurrection: Ertugrul) take you back in time for an epic a week, while dizi like Hercai (Unstable) and Masumlar Apartmanı (The Innocents)give you modern twists to love stories.

Turkish TV is also making headway in other platforms like Netflix, with critically acclaimed shows like Atiye (The Gift), Bir Başkadır (Ethos), and Behzat C.

7. Broaden Your Horizons And Perspectives Of The World

While this may sound obvious, it’s still worth reminding! As is the case with learning any language, learning Turkish will help broaden your horizons and perspectives about the world we live in.

There are lots of ways to better understand the dynamics of another country, whether it be traveling to the country, exposing yourself to its history and culture, immersing yourself in its cuisine, or living and working in the country.

But there is nothing that can beat communicating with people in their own language to reshape your worldview!

Since Turkish is spoken across a wide geography, learning Turkish will help you broaden your perspectives about a large segment of the world.

So why learn Turkish? There you go! That was 7 incredible reasons to learn Turkish. But if you start your Turkish language learning journey, you’ll be sure to find more good reasons.

While learning any language is a great way to expand your horizons, it requires time and effort, so you need to be motivated. Hopefully these reasons can help motivate you in your journey to learn Turkish.

But don’t worry if you feel that you’re biting off more than you can chew by choosing to learn Turkish! With the StoryLearning® method, you can learn any language fast through stories, and avoid the tedious bore of one grammar lesson after another!