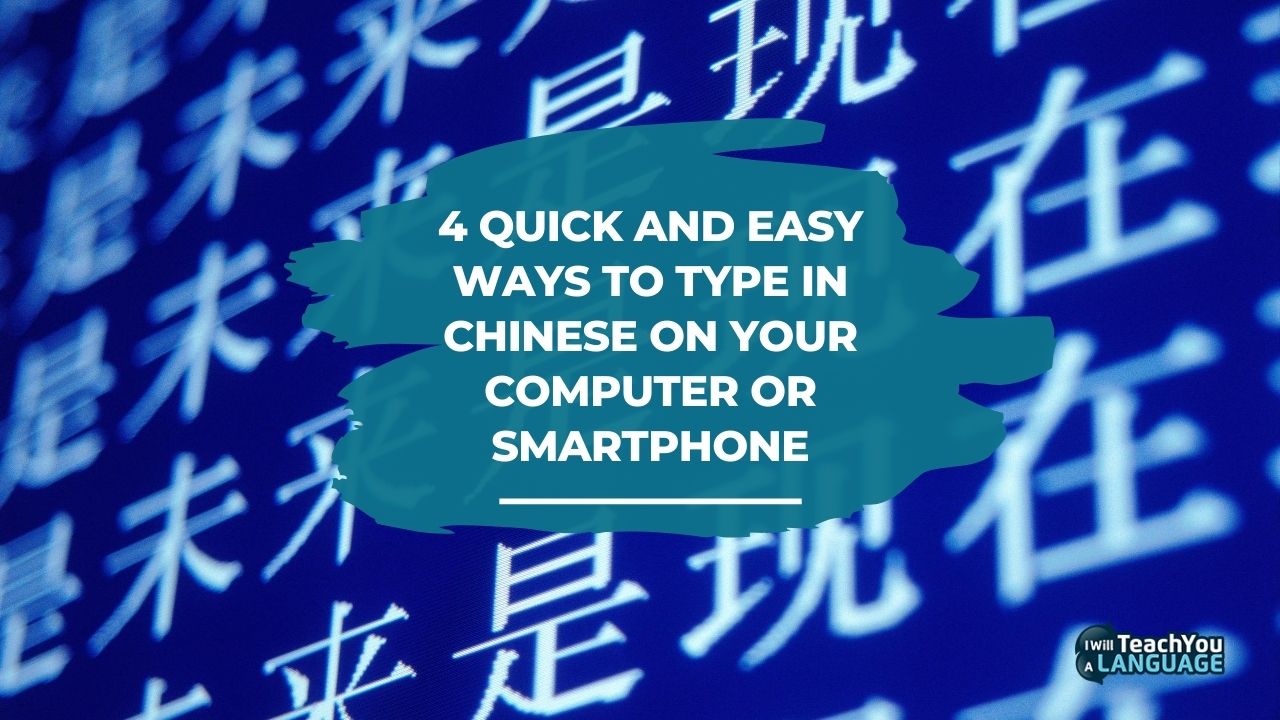 A common question that people learning Chinese ask, with a language that uses a writing system made up of thousands of characters, how do you type in Chinese?

In fact, there are several ways to type in Chinese, and most of them are extremely simple. When using a smartphone or computer keyboard, it’s arguably faster to type Chinese than to type Roman letters.

In this post, you'll discover 4 methods to type in Chinese. By the time you've finished reading, you'll be able to start typing in Chinese in minutes, so you can chat online to Chinese speakers.

Plus, you'll also discover how to practise writing in Chinese on your phone, so you can master the stroke order on the go.

You'll be typing in Chinese and communicating easily in no time. So let's get into it!

#1 Using A Pinyin Input Method To Type In Chinese 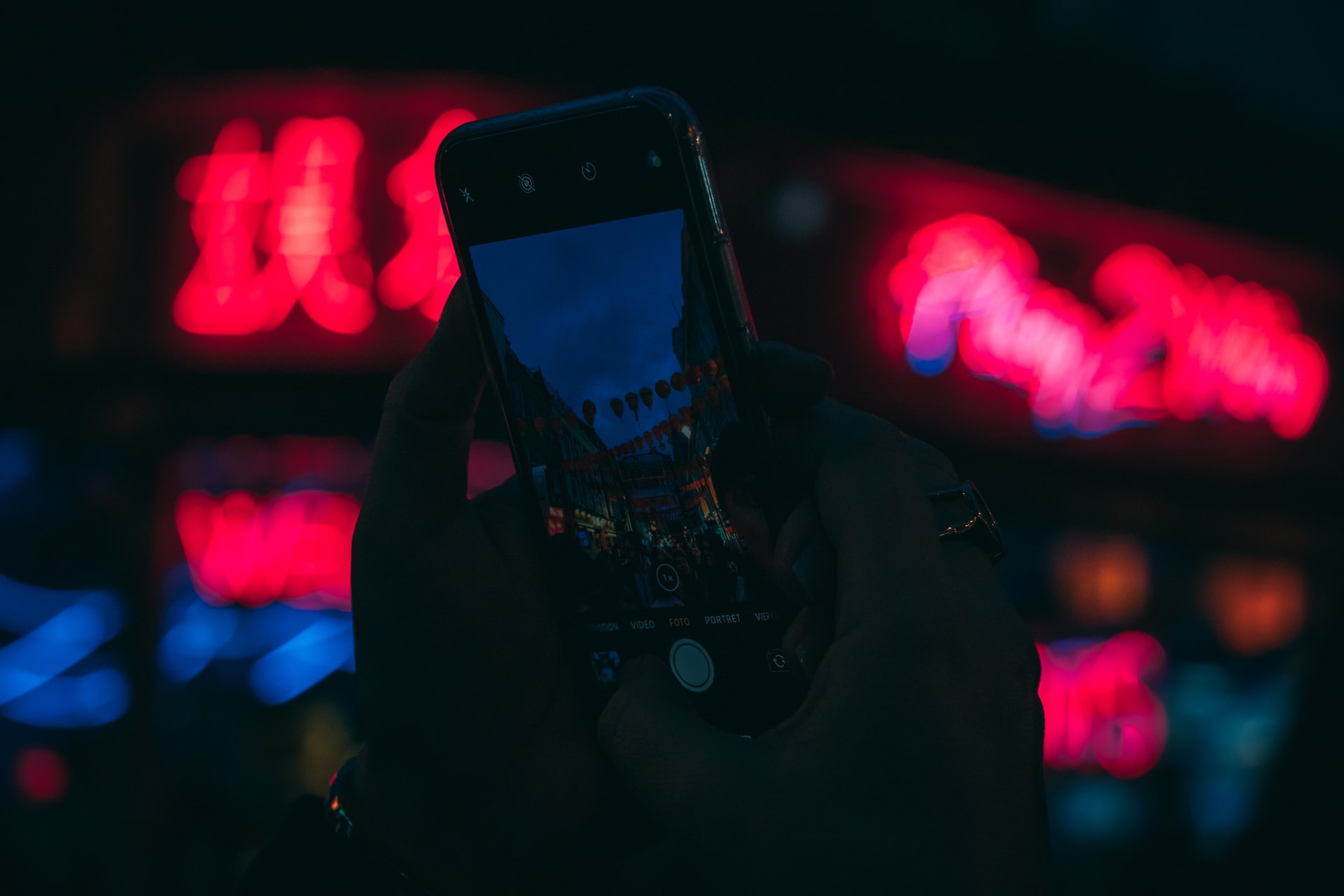 Several systems of Romanisation have been developed to write Chinese phonetically. But by far the most widely used nowadays is the system known as pinyin (拼音 pīnyīn – simply meaning “phonetic” in Chinese).

This system was developed in the 1950s. And it's the official system in use in mainland China. Schoolchildren in China learn pinyin before they learn how to write Chinese characters – as does almost anyone who learns Chinese as a foreign language. And it's on this system that the most common way of typing Chinese is based.

All you need to know to be able to write a word in Chinese is how to spell it in pinyin.

How you do this will depend on the input method you are using. But a common way is to hit the corresponding number.

For example, to write the character 好 hăo (good), I start by typing “hao”. This will give me a list of options, and since this character is extremely common, it is likely to be the first choice. I then hit ‘1’ to select it and the character appears on the page.

If the character you need isn’t on the first page of options, you can simply scroll through the following pages by pressing “down” until you find the one you need.

How To Type Chinese Sentences

This system works well. But if you had to go through the whole process for every character, it would take a long time. However, fortunately, you don’t need to.

Instead, if you just type the words one after the other (with no spaces), the whole sentence will appear as an option. And you just select it in the same way as you select an individual character.

For example, if I want to type the question 你怎么知道？nĭ zĕnme zhīdào? (how do you know?), I just type “nizenmezhidao”, and it will give me the option to select the sentence I want.

Even better, there is a faster way to type this sentence. Because of the way Chinese works and the fact that in pinyin, some letters can only be followed by certain others, to write this sentence, you only need to type the first letter of each character.

So instead of typing “nizenmezhidao”, if you type “nzmzd”, the input method guesses what you are trying to write and gives it to you as an option.

So now you can see why, with practice, it can be faster to type Chinese characters than it is to type out words in our Roman alphabet!

There are many different input methods. Each operating system has its own versions.

If you are using Windows 10, you go to “Settings”, “Time & Language” and then “Language”. You then click on “Add a Preferred Language” and find the Chinese input method you want to install.

Once you've installed it, you can toggle between languages by holding the “Windows” key and pressing “Space”. This allows you to quickly switch between English, Chinese and any other languages you might have installed.

#2 How To Type In Chinese On A Smartphone

Typing Chinese on a smartphone is almost exactly the same as using a pinyin input method on a computer. You simply find the relevant menu in your phone, add the Chinese keyboard and then switch to Chinese whenever you need to type in characters. 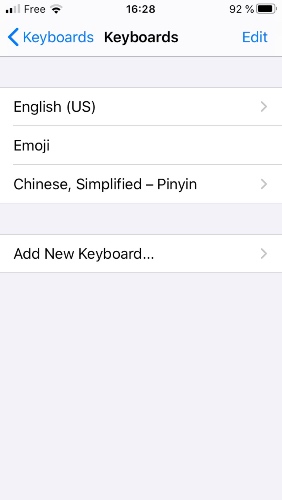 You just type in the same way as when using a keyboard. But since smartphones have touchscreens, you press on the character you want to select.

The same trick with typing only the first letter of a character works, and smartphones can also predict the characters that are most likely to follow the one you’ve just chosen. So sometimes you don’t even need to type anything and the character will appear ready for you to select! 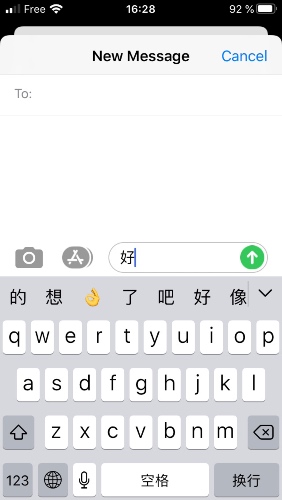 Again, as you can imagine, this can make typing Chinese on your phone extremely quick and easy.

In fact, it’s much easier to type Chinese than it is to write it by hand. And since smartphones do all the work for you, even native Chinese speakers can sometimes forget how to write certain characters because it’s been so long since they wrote the character the old-fashioned way!

#3 How To Write In Chinese On A Smartphone 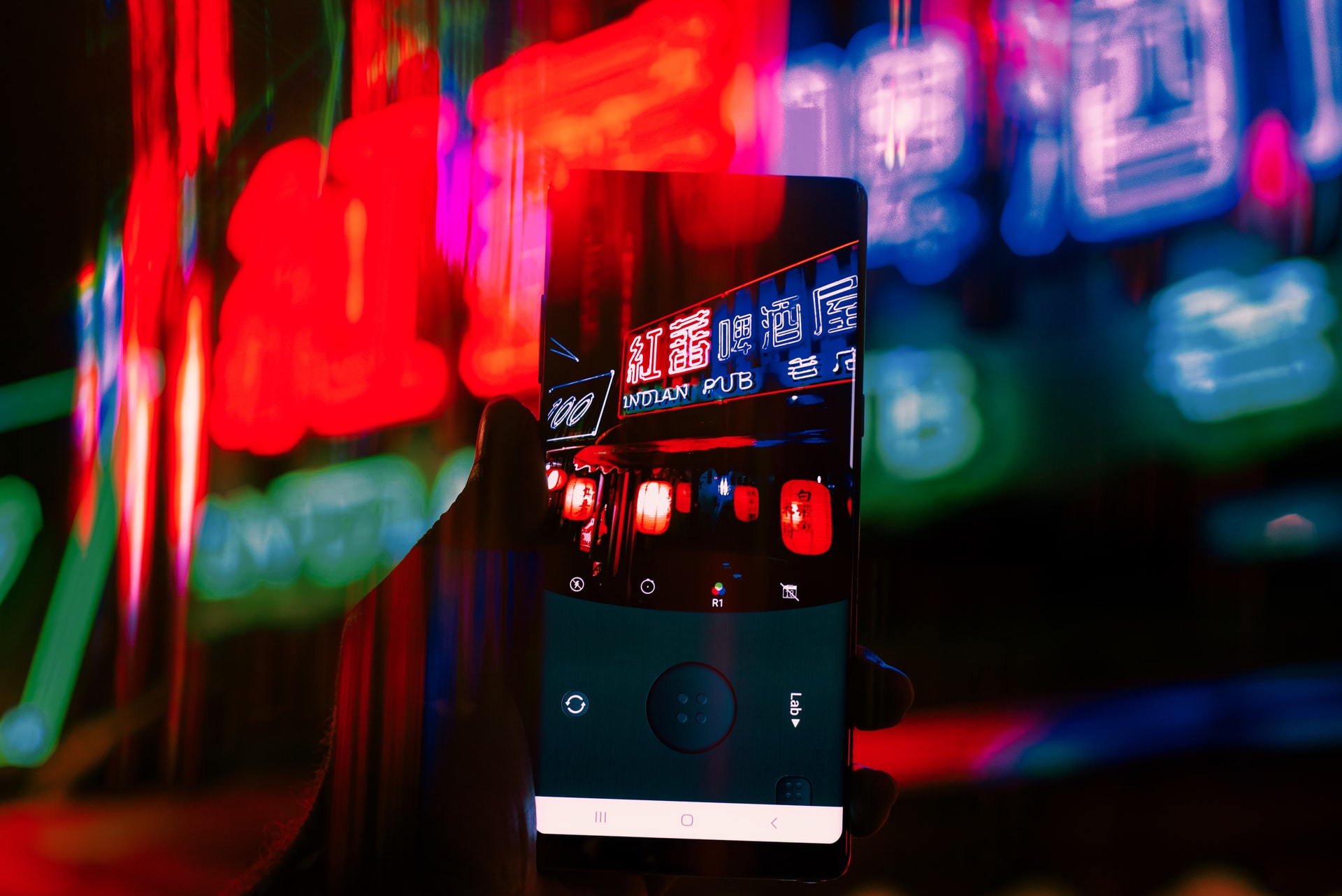 Another type of input method exists on smartphones, and if you're an ambitious learner, it’s worth considering. Essentially, instead of using a keyboard, there's a blank space on your screen where you write each character with your finger.

If you force yourself to do this instead of using a lazy pinyin input method, it’s a great way to help you learn to write characters because it forces you to remember the stroke order.

To do this, you need to know the correct stroke order in the first place. So this method is less suitable for beginners.

However, it can be a useful tool if you see an unfamiliar character and want to know what it means. That's because you can just “draw” it on your phone and look it up in the dictionary.

There is another type of input method you may come across, particularly in Taiwan. But unless you go to study in Taiwan, it isn’t worth learning since it is much more complicated.

Unlike mainland China, Taiwan never fully adopted the pinyin writing system. And in Taiwan, there's no standard system of Romanisation, although the Wade-Giles system is used for names and places (Taipei is written Táibĕi in pinyin).

This means that pinyin input methods are not so widely used there. And instead, a system known as Bopomofo is common. This system is a kind of “alphabet” based on Chinese characters.

And you will see these symbols written on the keys of Taiwanese keyboards. Each letter represents a sound. And you need to use these letters to type the character you want to write phonetically.

(The name “Bopomofo” comes from the sounds of the first four “letters” in the Bopomofo alphabet – in the same way the word “alphabet” comes from “alpha beta”, the first two letters of the Greek alphabet.) 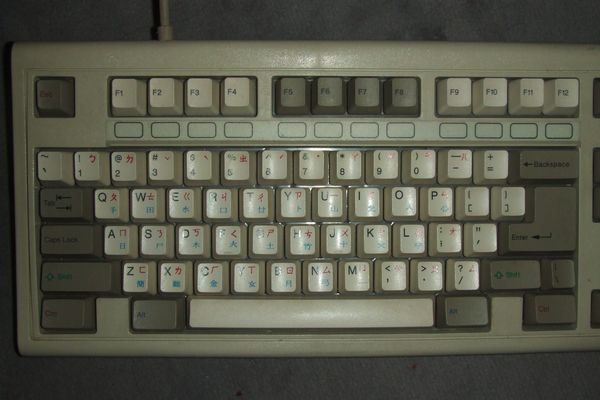 In this system, you also need to include the tone – there are special keys for tones. And when you type the word out, a list of options appears, from which you choose the character you need.

To use this system, you need to learn the phonetic symbols used on Bopomofo keyboards. And you also need to know how to “spell” the character you are trying to write. This makes it quite a tricky system to master. So unless you study Chinese in Taiwan, there’s no need to learn it.

Other similar systems exist in places like Hong Kong, for example. However, I won't to go into the details here since you are very unlikely to ever need them!

Which Method Should You Use To Type In Chinese?

For the majority of learners, a pinyin-based input method is by far the easiest way to type Chinese. This is because pinyin will almost certainly be the system of Romanisation you learn. And if you know pinyin, typing with it is extremely simple. And even if you want to type traditional characters, there are pinyin-based input methods that allow you to do it.

However, as I mentioned, if you want to practise writing Chinese characters, switching to an input method that lets you write by hand is a great way to help you remember them.

Not many Chinese people actually use this kind of input method because most prefer pinyin. But as a learner, it’s an excellent way to help fix the characters and stroke order in your memory. 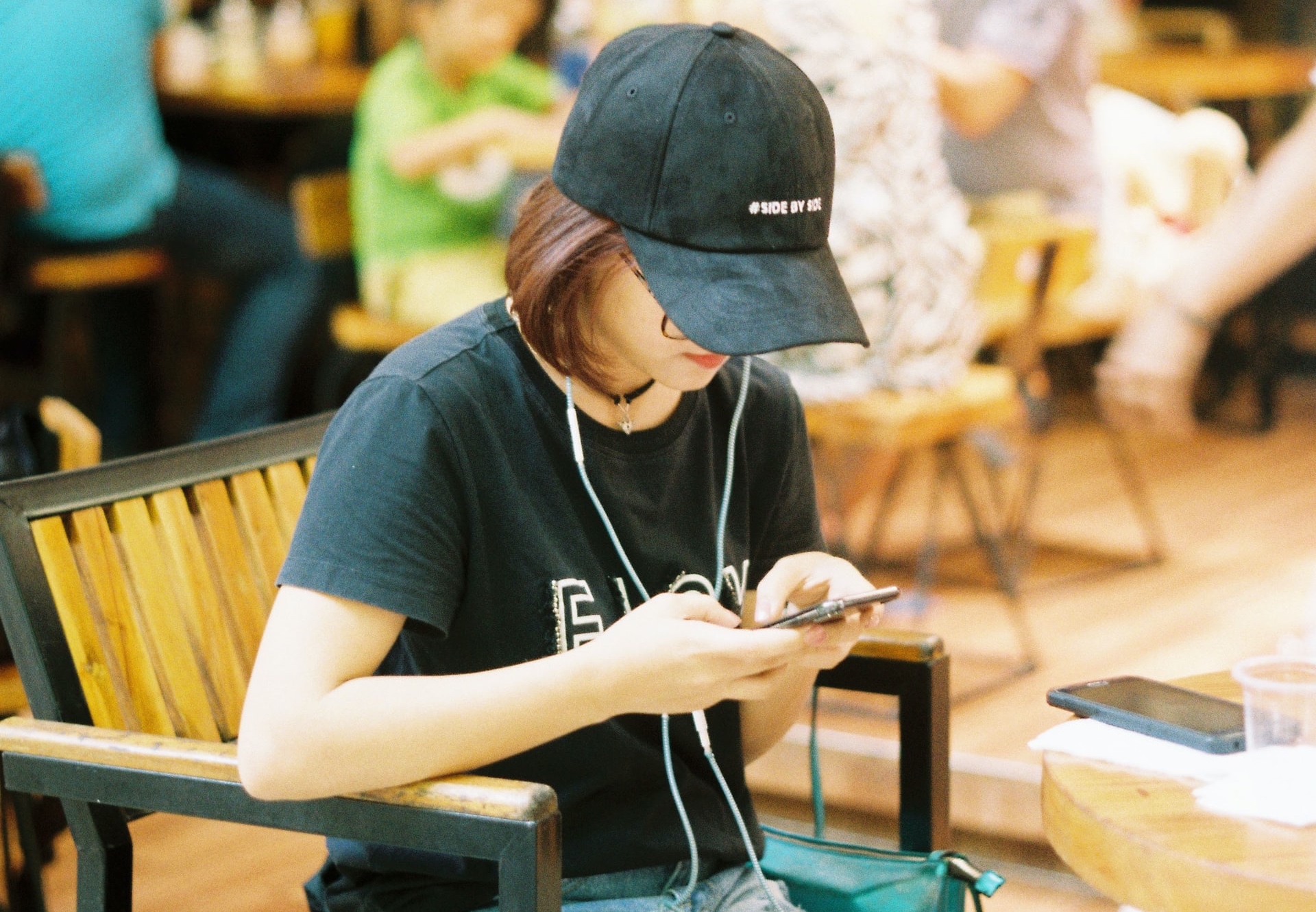 So, now you know how to type in Chinese. Your next step? Download a Chinese input method for your phone or laptop and give it a go.

The sooner you start trying to type in Chinese, the sooner you will get used to it. And this will allow you to chat with native speakers in Chinese, which is a fantastic way to practise and improve!