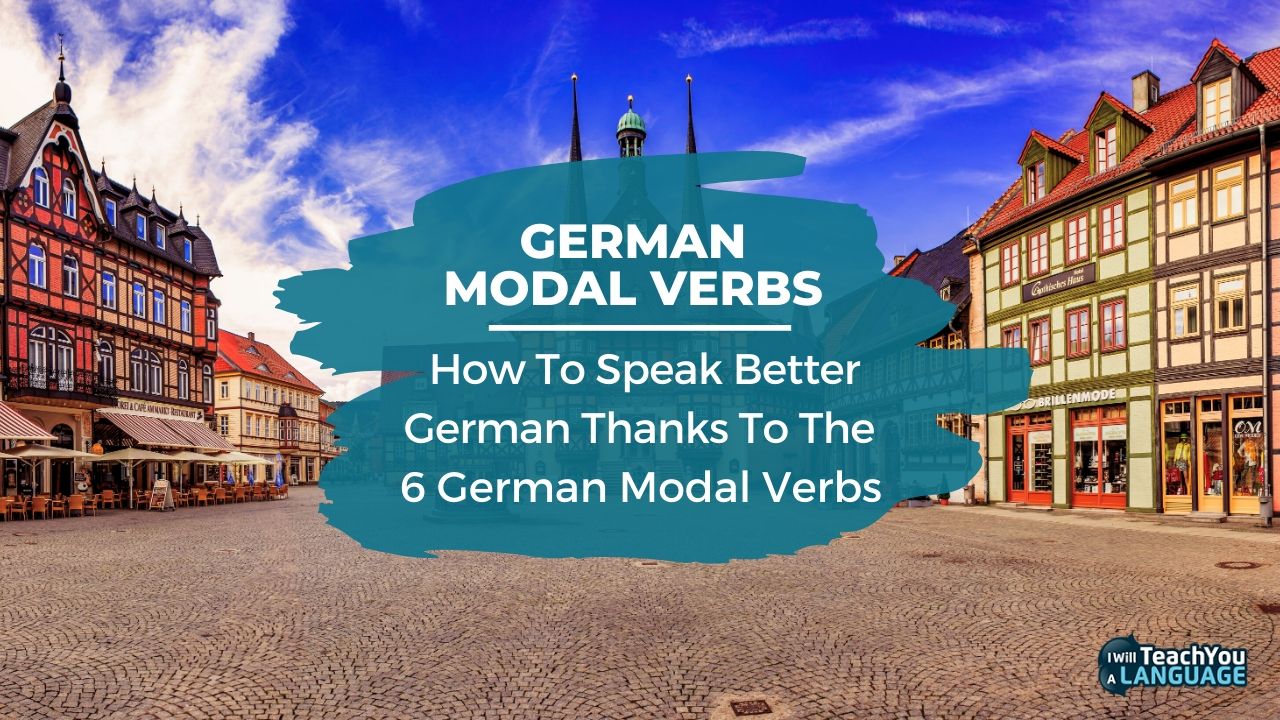 When you're learning German, you have to cover a lot of grammar right? (At least that's what the Grammar Villain wants you to think!)

But some grammar concepts will boost your speaking skills more than others.

That's why, in this post, I'm going over German modal verbs which  will make a massive difference in your ability to chat to Germans in day to day life. Modal verbs in German are words like want, may, like, must, can, and should that allow you to express an obligation or possibility.

For example, when ordering food, talking about your preferences, or asking permission for something, you need a modal verb. So that covers a ton of everyday speaking situations.

These irregular verbs are essential when speaking German, and learning them will instantly enhance your conversational skills.

I'll explain how to use each of the six most common modal verbs in the present, past, and future tenses. I'm also providing plenty of example sentences to help you use these verbs like a native speaker.

With German Uncovered you’ll use my unique StoryLearning® method to learn German modal verbs and other tricky grammar naturally through stories. It’s as fun as it is effective.

What Are German Modal Verbs?

The modal verbs in German are:

These words allow you to express what you're supposed to do, what you're able to do, and other similar moods. Aside from specific idiomatic expressions, each modal verb has a distinct meaning.

Most of the time, you'll find modal verbs combined with other verbs in a sentence. 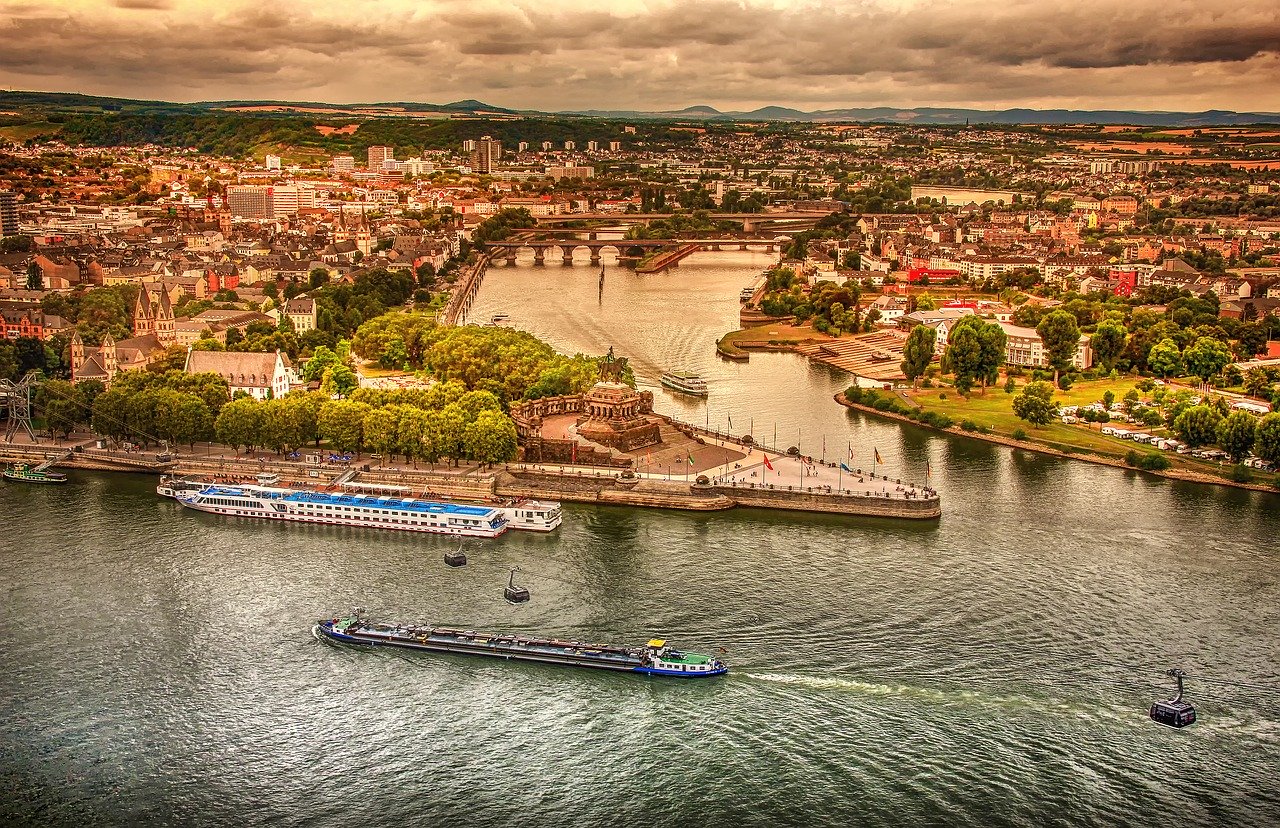 Why You Should Learn German Modal Verbs

Modal verbs are unique words that tell us more about the main verbs in a sentence.

You use them every day to ask for permission and express your ability or willingness to do something.

Imagine asking the following questions without a modal verb.

It's essential to recognize modal verbs and know how to use them. Otherwise, you won't know if someone is asking or demanding something of you.

Knowing these verbs will significantly improve your ability to understand and be understood in German accurately.

Let's look at one of the most frequently-used modal verbs, können. This verb lets you describe what you can or are able to do.

In the examples below, note how the modal verb is conjugated, but the main verb is in its original, or infinitive form.

Below, you'll see how to conjugate the verb können for each personal pronoun in the present and past tenses.

You may have noticed that the first vowel changes from “ö” to “a” in the present tense.

Rule #1 – Every modal verb, except for sollen, changes its first vowel for the pronouns I, you, he, she, and it.

In the simple past tense, you can see how können loses its umlaut.

Rule #2 – All of the modal verbs drop their umlauts in the past tense.

The modal verb comes second in this construction and the main verb takes the last position in the sentence.

When the sentence has no main verb, use a form of haben with gekonnt to create the past participle.

It's common in spoken German to leave out the main verb and imply its meaning.

When you want to talk about things you have to do, or must do, use müssen in German.

Again, notice how the first vowel changes, this time from an “ü” to a “u.” Remember this change is only for the pronouns I, you, he, she, and it.

Let's see how müssen is conjugated.

Notice how the endings in the simple past form are the same for müssen as they were for können. Recognizing these patterns make it easier to learn how modal verbs behave.

Next, let's look at some examples in the simple past tense.

Remember that the simple past is most often used in written German. The past participle is more common in spoken German. The same rule for können applies here. Use a conjugated form of haben, then the main verb, and finally the infinitive müssen at the end.

In some cases, you'll use the past participle form that includes haben and gemusst.

Only use this form when there is no main verb. 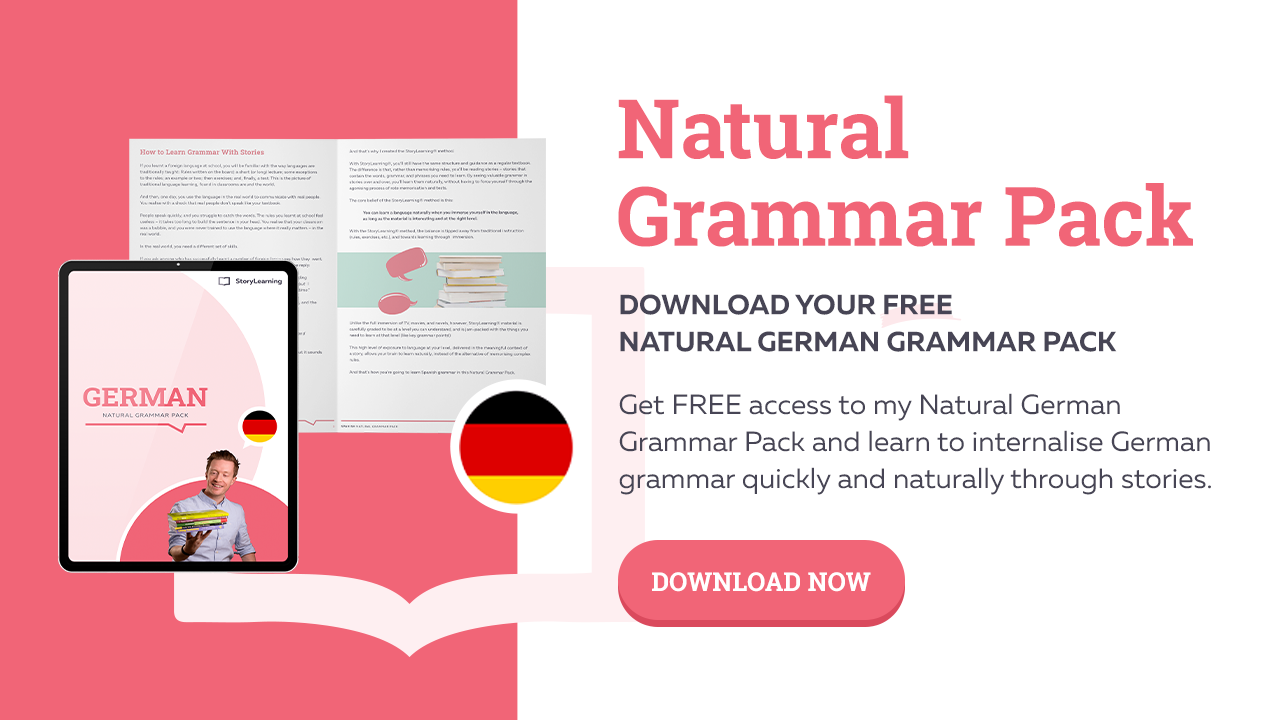 Mögen is a modal verb that you use to talk about who or what you like. This modal verb is often used on its own or combined with other verbs.

Notice how the “ö” in mögen changes to an “a” in the present tense.

Below is the conjugation table.

You might have noticed the patterns that the modal verbs follow in the present tense. All you need to remember is how the second vowel changes.

Rule #3 – The root form will always be the same for I, he, she, and it. The you form adds an -st ending. You plural is the original root with a -t ending. We, they, and you formal use the infinitive form of the modal verb.

To form the past participle, use a form of haben with gemocht.

Unlike the past participle forms you've learned so far, mögen doesn't use the double infinitive form. In this case, you should always use the construction shown above.

Use sollen to express what someone should do in German.

Sollen is the most regular of all the modal verbs. Notice how there is no vowel change in any of the conjugated forms.

Below you'll find the conjugation table. 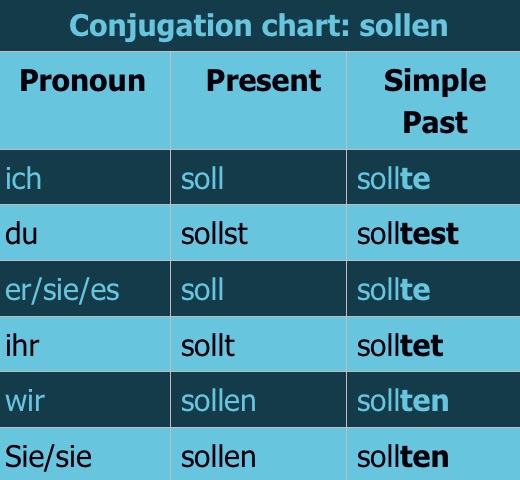 Use the past participle to talk about what should have been. Most of the time, you'll use a double infinitive and the appropriate form of haben.

The form haben and gesollt is rarely used.

Use wollen to describe what you want.

You'll find the conjugation table below. 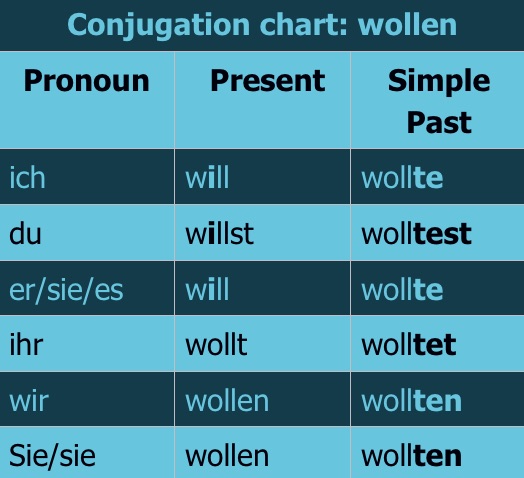 Notice how the simple past is always formed by taking the root of the modal verb, removing the umlaut, and adding the appropriate ending.

The simple past pattern continues here.

Form the past participle with haben and a double infinitive. Only use the combo haben and gewollt in the absence of a main verb.

Our final modal verb is dürfen, or may, in English. We use this verb to ask what is permitted or allowed.

You'll recognize the modal verb patterns in the table below.

You'll find examples of dürfen in the simple past below.

Form the past participle by choosing the correct form of haben and a double infinitive. The form haben and gedurft is rarely used. Remember that your modal verb now comes at the end of the sentence.

German Modal Verbs: Time To Go Out There & Use Them! 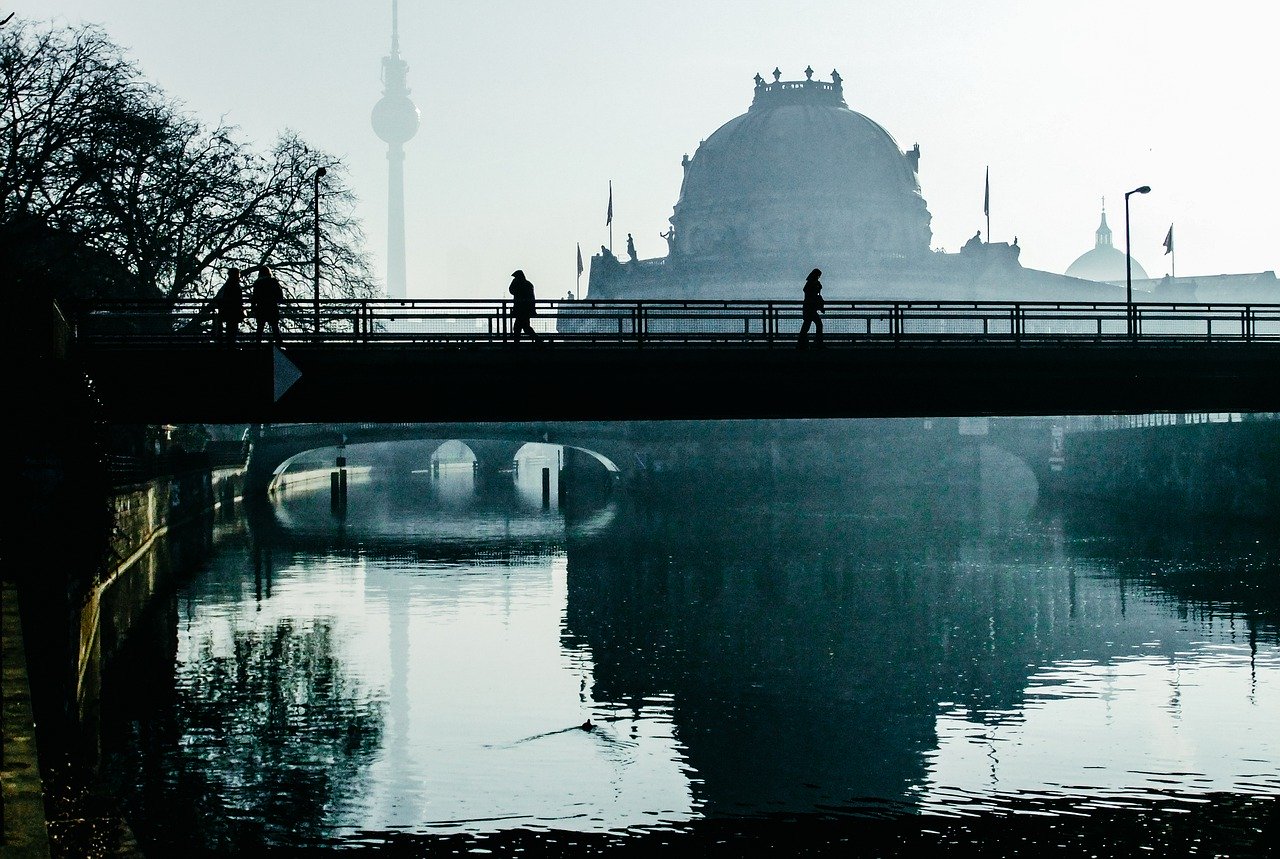 Wow, we've covered a lot in this post. So let's summarize all the main points you learned about German modal verbs so you can start using them in your German conversations:

To master German modal verbs, make sure you're reading plenty of German and listening to it, whether that's through German podcasts or German movies and TV series. That way, you'll hear and see the modal verbs over and over. And this is the key to learning how to use them right.

There you have it. Now go out there and use those German modal verbs to express yourself with incredible accuracy!

Over to you – are you clearer on how to use the modal verbs in German the right way? What other aspects of German grammar do you find tricky?