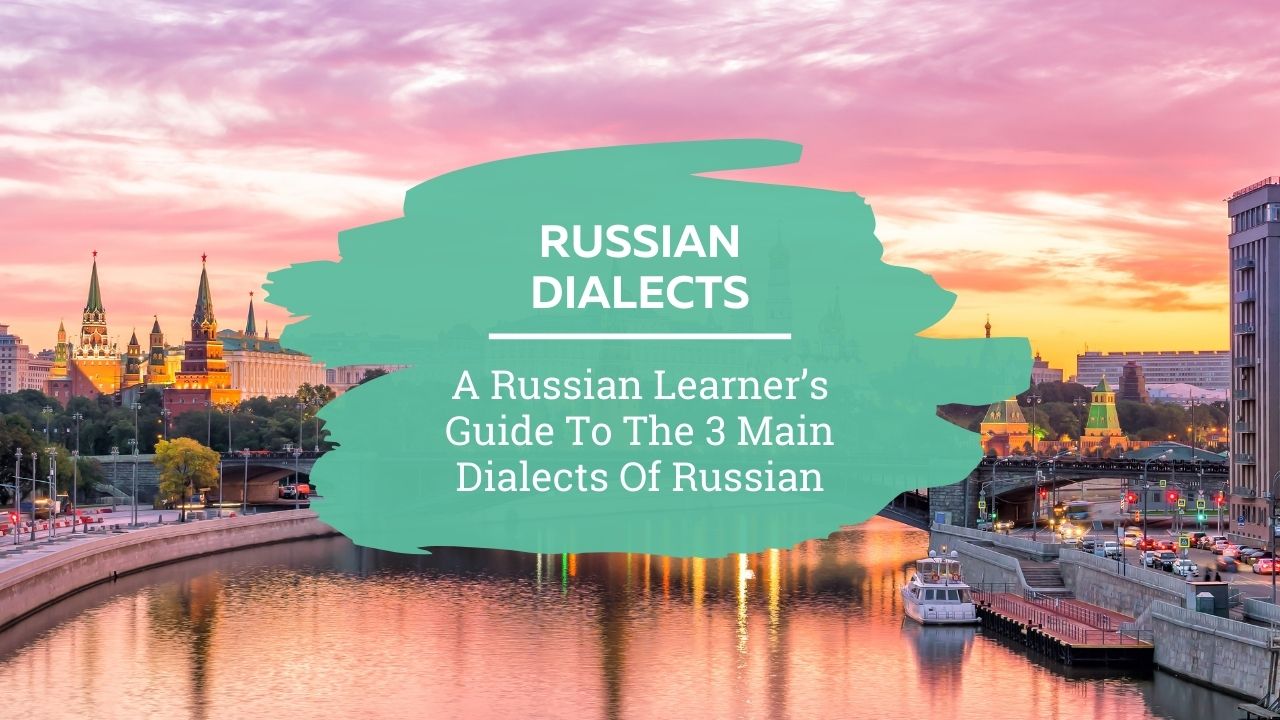 Russian Dialects: A Russian Learner’s Guide To The 3 Main Dialects Of Russian

Learning Russian will allow you to connect with about 270 million Russian speakers with huge populations in more than a dozen countries. As you might expect, not all Russian speakers speak the same way and the language has several dialects.

Despite having so many speakers, the Russian language has much less variation than you would expect. In fact, compared to languages like Portuguese (258 million speakers) or even German (132 million), Russian has relatively few dialects.

In Russia itself, most people tend to speak closer to standard Russian. This standardization goes back to the Soviet Union’s education system and centralized communication.

That being said, there are still a lot of interesting varieties of the Russian language. So consider this a crash course on Russian dialects, where we’ll go over:

What Do We Mean By Dialect

If you ask three linguists what a dialect is, you’ll get three different answers.

Dialects don’t have strict boundaries. People may speak in a more formal setting at work, use more dialectal expressions at home, and switch back and forth between the two with their neighbours.

Likewise, there are often groups of dialects within larger clusters. Think of the way you can identify an English speaker by different degrees such as British >  English > West Country or American > Southern > Alabama.

So while speech from the West Country and the West Midlands may have things in common, they are still not the same.

So what qualities do Russian dialects have?

Take this as good news because it means that unlike languages like Italian or Japanese, you won’t need to learn (much) new grammar.

Интересный факт – While most Russian speakers know the word диалект (dialect), they usually refer to different varieties of Russian as говор/говоры (govor/govory). So in this article, you’ll see that term as well.

The Three Main Dialects Of Russian

The big difference between these three groups is mostly to do with vowels like o and a and some specific consonants. This is a good starting point but we’re going to go a bit further

The Central Russian govor is the variety that you’ll get the most exposure to. It’s more or less considered the norm and the closest to standard Russian.

You’ll get plenty of exposure to the среднерусский говор in places like Moscow, the Vladimir Oblast, and the Novgorod Oblast.

One of the most noticeable features of the Central govor is аканье (akanye). The term akanye best translates to ‘sounding like ‘ah.’ Don’t be scared by terminology, because you probably already know all about this. Akanaie causes certain unstressed vowels to sound like an ‘ah’ or ‘uh.’

This is why we pronounce words like много and вода as mno-guh and vah-dah. The stressed vowel is fully pronounced, but the other isn’t. This vowel change is one of the big reasons that Russian spelling can be a bit unpredictable.

The Northern Russian dialects are spoken around St. Petersburg, Arkhangelsk, and the Vologda Oblast. You might also hear this is parts of Siberia and the Russian far east.

People often say that the северорусский говор has the ‘oldest’ feeling to it. Unlike Central Russian dialects, Northern vowels have Оканье (okanye). This means that when an o is unstressed, it is still fully pronounced.

This feature is particularly strong in Vologda. In the вологодский говор, you’ll hear things like Хорошо (khoh-roh-shoh) with every ‘o’ fully pronounced.

The Northern Russian varieties also have some interesting features with its consonants. For some consonant clusters, one sound falls away, while the other is lengthened.

You may hear a merger between the consonants ч (ch) and ц (ts) as they might be pronounced the same.

The Southern Russian dialects are mostly spoken in the area of Russia’s Central Federal District (Центральный федеральный округ) which includes more than a dozen oblasts like Belgorod, Ryazan, and Tver.

Many of these features can also be seen in Russian speakers in Ukraine.

The Southern dialects are probably the most noticeable to learners. One of the most striking things you’ll notice is the way that the г (g) sound changes. Oftentimes the sound will be pronounced as a ‘h’ sound. And at the end of words, it can become a х (kh) sound.

In some govory, the г in a word may drop out altogether.

Some govory in the south have a process called яканье (yakanye). In essence this makes some vowels sound more like я (ya).

The final t in third person verbs may be softened a bit.

And of course, there are several words you might hear in southern govory that differ from the standard variety.

Anywhere that Russian is spoken, new words have been borrowed to express the realities of the place. That includes Russian speakers in Central Asia, Israel, and New York.

The Russian Of Central Asia And The Caucasus

At the same time words with non-Russian roots may have different meanings.

For example, in standard Russian the word сарай refers to a shed or a storage building. However in Kazakhstan it means palace.

It’s also worth noting that words borrowed into Russian from Central Asian languages will often keep their original pronunciation. So the word орамал (handkerchief) has a full ‘o’ sound at the beginning even though the stress is on the last syllable.

Likewise, dialects like Астраханский русский, spoken in the Astrakhan Oblast in the Caucuses areas incorporate a large number of words from Turkic languages like Turkish, Kazakh, and Kyrgyz.

Today about 17 percent of Israelis speak Russian. That means more than 1.5 million speakers in the country. Many of Russian speakers  came from families who emigrated to the country from the Soviet Union and often call the language Русит (Rusit).

As such, the Russian of Israel uses some older words as well as many terms borrowed from Modern Hebrew, such as:

*in standard Russian, xумус only refers to hummus and нут is for chickpeas

Russian in Israel may also put expressions together in a different way than in the standard form. For example, you could hear брать автобус instead of ехать на автобусе (go by bus) or делать армию instead of служить в армии (to serve in the army).

The number of communities of Russian speakers around the world is enormous. While most of these speak “standard Russian” (more or less), you can find variations everywhere.

You may hear new words and expressions from Russian speakers in New York, Harbin (Northeast China), Moldova, and around the world.

Russian Varieties In The Real World

By this point, you should have a solid overview of Russian dialect in and outside of Russia. While you might know something about one of the govory, it’s best to start with an introduction in standard Russian and see how things go from there.

As they say in Russian, язык до Киева доведёт, which means you can get anywhere using your tongue.

So while you shouldn’t worry too much about different Russian dialects, it’s good to know something about them. And when you encounter a govor you’re not familiar with, when watching Russian movies for instance, you can have some idea how to follow along.