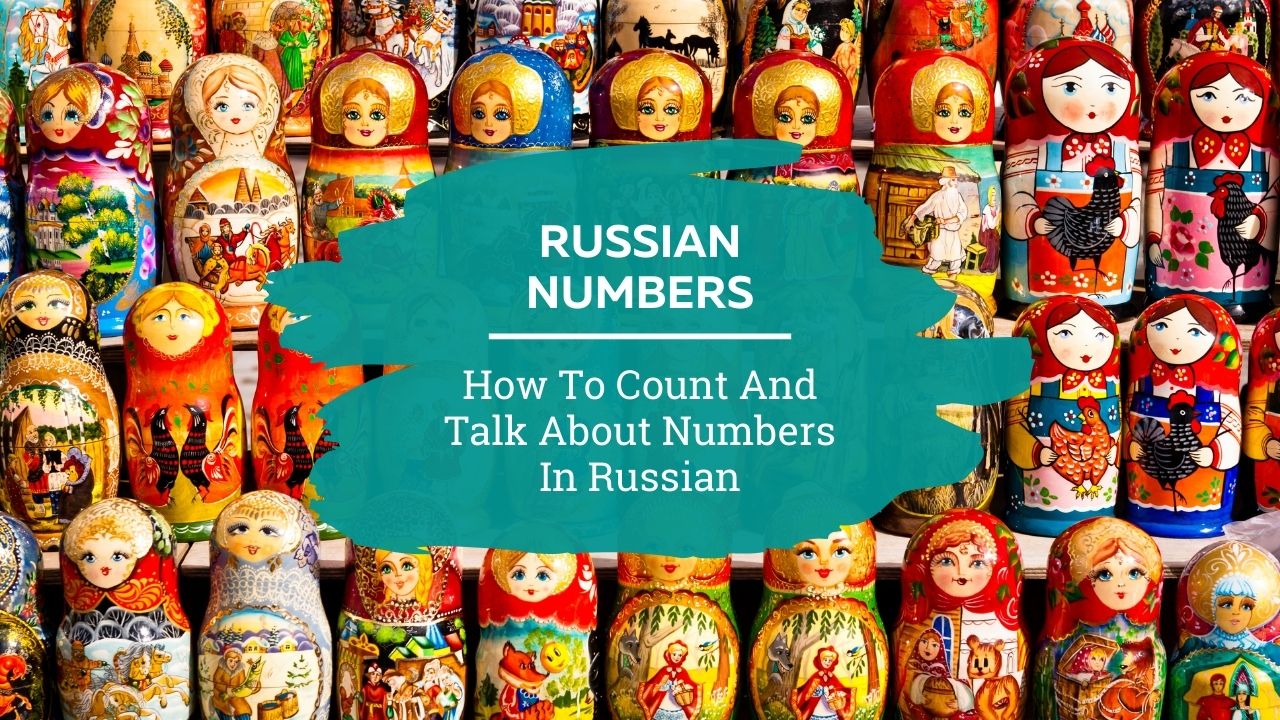 Russian Numbers: How To Count And Talk About Numbers In Russian

When learning Russian or any other language, one of the first things we learn to do is count. And while doing complicated math isn’t a part of most of our day-to-day lives, knowing our basic number definitely is.

So this article is all about Russian numbers!

You might not have noticed, but numbers in languages tend to be a bit strange. Think about how weird “eleven” and “twelve” are next to “thirteen“, “fourteen“, and “fifteen“.

Think about how simple “four” and “fourteen” are, but how weird “three” and “thirteen” might seem to a non-native speaker.

So in this article you’ll get the rundown on for Russian numbers. That includes:

Let’s start with the numbers one to ten and then build up from there.

You may have noticed that “one” and “two” have multiple forms. This goes back to Russian’s gender system. So if you specify one or two of something the form needs to match the gender.

In most situations the word “one” is expressed with один/одна/одно.

However, when counting, people always use the word раз instead. The term actually means “time” as in два раза (two times / two separate occasions). So if you hear a mic-check, it will sound like

For numbers between 11-19, Russian uses the suffix  -надцать at the end of a word in the same way that English uses the suffix -teen. What you might find tricky is that this causes a few spelling changes.

Likewise, if the suffix -надцать is attached to a number that ends in the letter ь (мягкий знак / soft sign), that final letter will drop out. And the ‘e’ at the end of четыре falls off as well.

*The spelling of these numbers change from the base form.

While the base for most numbers is recognizable, it’s probably best to learn each of these individually.

While the base of these numbers may be apparent, the number сорок (forty) has nothing to do with четыре. This is a quirk of history, so you’ll need to learn forty as its own word.

Building On Russian Base Ten

Now that you know the base-ten numbers, adding on to them is simple and straightforward. As in English, you just put the small part of the number after the larger part.

It’s worth noting that the first and second parts of these numbers are written as two separate words with a space (пробел) in between them. This good news because it means that you can just write them out without any worry about any extra spelling changes.

Now that you know numbers going up to девяносто девять, you’ll want to discuss one-hundred (сто) of something and more.

Fortunately, Russian forms numbers larger than 100 in the same way as 20-99. You simply add the numbers together as you would in English with a space in between each part of the word.

As with the multiples of ten, multiples of one hundred in Russian can be a bit unpredictable. Only the number 100, uses the form сто, while its multiples use some variation of it.

You can see all the forms in the table below.

The good news is that making a larger number from these is just as simple as before. All you need to do is place each number in the same order as you would in English with a space in between.

The Grammar Of Russian Numbers

Now that you’re more familiar with Russian numbers, things get a bit tricky one last time. You see, in Russian, the number of something can have an effect on the grammar.

In particular, a noun will often decline depending on the number that comes before it.

Russian numbers can change the declension of the noun being counted. The important thing here is the final part of the number.

Numbers ending in два, три, and четыре  use the genitive singular

And any number ending in 5-20 takes the genitive plural. So do multiples of ten and one hundred.

If a number is larger than двадцать (twenty), then just look at the last number. No matter how big a number is, the final part will tell how to decline the verb.

When you first look at them, Russian numbers can come across a bit intimidating. There are a few special and irregular forms to learn, but as will all things, knowing Russian numbers comes with time and practice.

And thanks to this article, you now know a bit about:

Now that you know the basics, you should be able to form any Russian number up to 999. You can try practicing. Just pick a big number and start putting it in Russian.

Listen out for the numbers as you watch Russian movies or read stories in Russian.