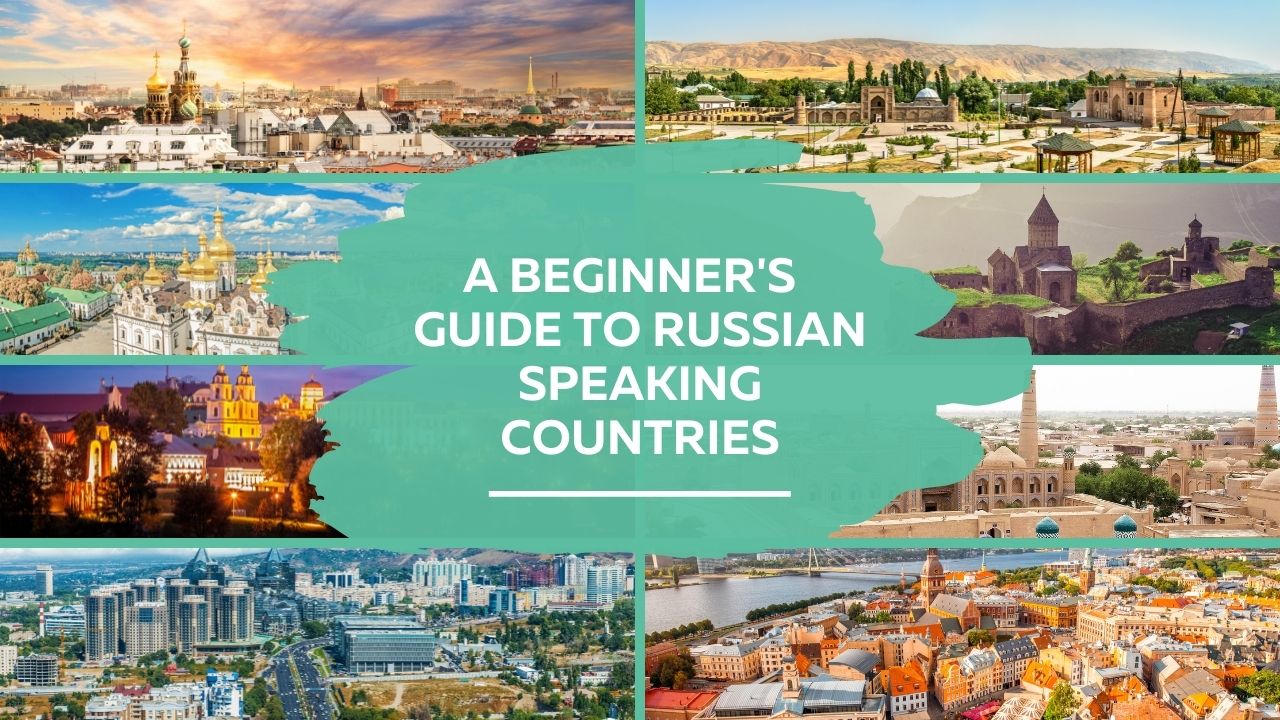 As a Russian learner, you are spoiled for choice when it comes to Russian-speaking countries. As an official language in numerous countries with large populations of speakers around the world, Russian is spoken in loads of places.

Today, Russian has more than 258 million total speakers worldwide. This makes it the 8th largest language in terms of speakers and the most widely spoken Slavic language.

Aside from Russia itself, you can find speakers in plenty of countries throughout countries that were part of the USSR. That means Russian can be heard in Eastern Europe, Central Asia, the Caucuses, and beyond.

So in this post, you'll discover some of the different Russian speaking countries. That includes places where it’s the official language, a recognized language, or simply has a large Russian-speaking population.

Each of these areas may have their own variety of Russian with its distinct local flavour. Find out more about Russian dialects.

Russian As An Official Language

As you might expect, Russian is the official and main language of Russia. However, it also has a status as an official language in other countries with millions of speakers.

In Kazakhstan, Kyrgyzstan, and Belarus, Russian has official status and is used quite widely. In each of these countries Russian is the co-official language. You’ll easily find someone to practice with in almost any urban area.

Obviously if you’re walking down the streets of Moscow or Vladivostok, you can approach a stranger in Russian. But what about Minsk or Almaty? Simply put, yes. Unless you’re in the countryside, feel free to strike up a conversation in Belarus, Kazakhstan, or Kyrgyzstan in Russian.

In Moldova, and Ukraine, the majority of people can speak Russian to some degree. Russian is many people's first language in some parts of these countries. In Moldova, you’ll hear loads of Russian in the south of the country and in the capital Chisinau.

In Ukraine, people speak more Russian in the east and south parts of the country. You’ll also hear the language extensively throughout Kyiv. However, in Western Ukraine and Lviv in particular, people may be reluctant or simply refuse to speak Russian.

Not Official, But Widely Used

While Russian is widely used in a number of countries, it may not have official status there. However, depending on where you travel in some of these countries, Russian may still be widely used. So make a trip to the Caucasus, Central Asia, and the Baltics and give your Russian a try.

In three countries – Tajikistan, Turkmenistan and Uzbekistan, Russian is the recognized language for inter-ethnic communication.

Russian’s status here is a result of the USSR that still continues today. This means that while Russian might not have status as an ‘official language,’ it’s still widely used. Likewise, each of these countries have significant populations of ethnic Russians.

As someone visiting, you can feel free to try using your Russian here. Although some people (mostly younger) may also know English, Russian will get you pretty far in these countries.

Russian In The Baltic States

Collectively, the three Baltic nations of Estonia, Latvia, and Lithuania are known in Russian as Прибалтика (Pribaltika). Although Russian is considered a foregin language in each country, they all have a sizable Russian speaking population, mostly of ethnic Russians.

While Russian was widely spoken in Pribaltika before the break-up of the Soviet Union, the linguistic situation is quickly changing. Since the 1990s, English has been quickly replacing Russian as the dominant foreign language.

That means it could be more difficult to use your Russian unless you’re with older people or in a specifically Russian-speaking area. And while some younger people may know Russian to different degrees, they may be hesitant to speak it since it can carry some political baggage for some people.

It’s hard to say how many people exactly ‘speak’ Russian in the Baltics. But to give you an idea, here’s how much of each country’s population is made of native Russian speakers.

In each of these countries, Russian-speakers tend to live in urban centers and in the east. If you’re looking to practice your Russian, you'll need to be deliberate about where you visit. In Estonia, you can find plenty of русскоязычные in Narva and Sillamäe. And in Latvia, try visiting the Latgale region or parts of the capital Riga.

Russian In The Caucasus Region

Between the Black and Caspian Seas and south of Russia sits the Caucasus Region, known in Russian as Кавказ/Kavkaz, made up of Armenia, Azerbaijan, and Georgia.

Each of these countries was part of the former Soviet Union and as so each nation uses Russian to various degrees. However, Russian doesn’t have official status in any of these countries. That being said, you’ll still find plenty of speakers if you come for a visit.

Throughout the Кавказ as a whole, English is becoming increasingly common as a foreign language. Although this doesn’t necessarily mean that English is replacing Russian. Instead it means that younger people in the Caucasus may speak their native language, Russian, and English.

Georgia and Armenia use Russian quite extensively. Likewise, you’ll hear the language on the radio and TV and find Russian print media with ease. That means you can approach someone using Russian without a second thought.

In every Caucasus country, you can speak Russian in the more urban areas where there are large populations of ethnic Russians. However, as you move away from the larger cities, people are less likely to speak it (or English!), so be ready.

Russia is an enormous country with centuries of history behind. People have immigrated into and emigrated from the country for hundreds of years already. That means that you can find communities of Russian around the world due to various waves of migration.

Huge numbers of Russian immigrated to Israel in the 20th century and that legacy still stands. Today more than 1,5 million Israelis (15% of the population) speak Russian. Finding Russian-lanugage newspapers, TV, and websites from Israel is easy.

With about 3 million people, Germany has the highest Russian-speaking population outside the former Soviet nations. The vast majority of them live in Eastern Germany. As such, you can find Russian speaking communities in cities like Berlin, Leipzig, and Dresden.

Ethnic Russians have been living in Northern China for centuries. As one of the cities between the two countries, you can use Russian with ease in cities like Harbin.

Small communities of Russian-speakers still exist in the state Paraná in southern Brazil. The Russian they speak here is much older since it dates to before the October Revolution. So if you want to get some historical practice in, this is the place to go.

Russian Speaking Countries Around The World

With more than 258 million speakers around the globe, the Russian language has made a huge impact on the world. That means you don’t have to go to Russia to experience and practice the language for yourself. You can go to any of the numerous Russian speaking countries in Europe and Central Asia.

Aside from that you can find Russian-speaking communities in almost any country. So now that you know some more about where Russian is spoken, it’s time to go out and learn some for yourself!

While you're dreaming of your next destination, get yourself ready for your trip by applying the StoryLearning® method and immersing yourself in short stories in Russian.