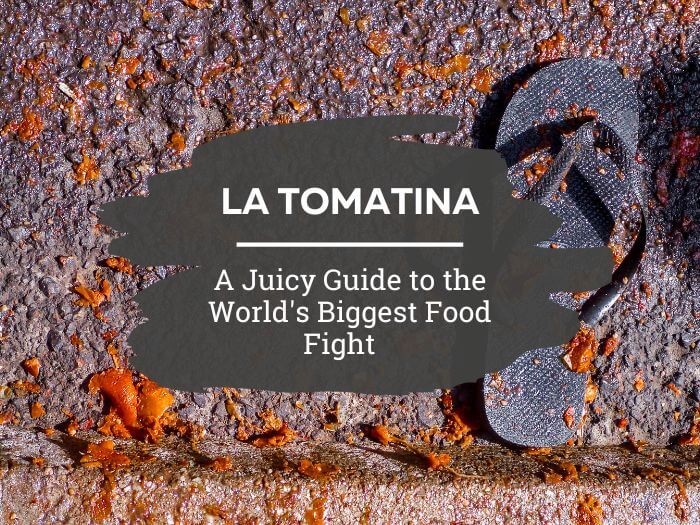 Why did you start learning Spanish?

Well, you're in luck. When you learn Spanish, you can experience Spain's many festivals like a local. Knowing the language is a gateway to meeting new Spanish friends during these events. And creating even better memories of them.

That's why, in this post, you'll discover La Tomatina Festival, one of Spain’s most iconic fiestas.

By the end of this post, you'll know what's what about this very messy, but fun Spanish fiesta.

You can either continue reading  or click to watch the video version below.

An Introduction To The World's Biggest Food Fight: La Tomatina

La Tomatina happens in the town of Buñol every year on the last Wednesday of August. It’s known as the world’s largest food fight. The food? You guessed it, tomatoes.

In fact, every year over 150,000 kilos of ripe tomatoes are used in the fiesta. They’re not eaten, but rather thrown around in an epic food fight among thousands of tourists and locals alike.

The town of Buñol itself is otherwise a quiet, typical Spanish town near the Mediterranean Sea. It’s 40km west of Valencia, and a couple hours south of Barcelona. The town only has a population of 9,000 people. But it draws over 15,000 tourists for the big event.

Most people who attend La Tomatina end up staying in either Barcelona or Valencia. There’s a nice historic castle worth a visit. But basically the big draw for tourists is the tomato-throwing fiesta.

You’ve probably seen footage before, and thought what on earth is the point of this massive food fight? Who came up with the idea of gathering thousands of people to fling tomatoes all over the place in a tiny Spanish town?

Well there’s actual no concrete proof of how the event originated. There are a couple of theories though.

How Did This Tomato-Throwing Festival Start?

The main one is that La Tomatina has its roots in a religious procession that went horribly wrong back in 1945. The story goes that some youth started causing a ruckus during a procession and made an important participant fall to the ground.

A fight then broke out. And there just happened to be a vegetable stand right there with a lot of tomatoes. People started grabbing the tomatoes and throwing them at one another in the chaos of the fight.

For whatever reason, townspeople kept reviving the tomato fight year after year. During the Franco dictatorship in Spain, the event was banned on several occasions.

But this never stopped the town!

Finally after Franco’s regime ended, La Tomatina became an official event. In the 1970s it started to gain popularity across Spain and internationally.

For years the event attracted upwards of 50,000 people. But for safety and economic reasons, the town decided to limit participation to just 20,000 people in 2013.

What Actually Happens During La Tomatina?

Is it all about just throwing some tomatoes around? Well mostly, yes.

Though the festival does get started with a fun and popular competition called palo jabón. Now imagine a big greasy pole, as tall as a two-story house. A ham is perched on top. The prize is the ham, and to get to it will take a lot of agility and courage.

It’s a lot more difficult then it sounds. In recent years, very few people have succeeded in getting the ham. In any case, the event organizers let this competition go on for about an hour, starting at around 10am.

At 11am, the cannon sounds and the trucks start rolling in. Of course it’s the trucks bringing the super ripe tomatoes. They roll into Plaza del Pueblo in the center of the town and dump the tomatoes.

That’s when the fighting begins. It’s a free for all: who can grab as many tomatoes as possible and start throwing them at anything and everyone.

The trucks then make their way around the town’s centre dropping more ammunition. And pelting festivalgoers with tomatoes as well. The whole event lasts about an hour. When the second cannon sounds, the food fight stops.

At this point, everyone is thoroughly coated in bits of tomato. Once the event ends, the town’s residents kindly rinse everybody off from their balconies. The town also organizes to clean the streets, hosing them down.

Miraculously, the tomato’s citric acid acts as a natural cleansing agent. So the streets look incredibly clean when it’s all said and done!

Once everyone gets cleaned up, there’s a big party in the evening. Stick around to hear everyone’s tales of the big fight, and enjoy the nightlife in this otherwise quiet town.

So that pretty much sums up La Tomatina. What else do you need to know? Well, the rules. In fact, the event organisers put out several official rules:

There is also a huge team of security staff for the event. And you have to follow their directions to ensure everybody’s safety.

Does this all sound appealing to you? If it does, then here are some tips for joining the fun.

First things first, you have to get a ticket. Due to the popularity of the event and for economic reasons, there is a limited supply. 15,000 tickets are offered to tourists every year. But don’t worry. It costs just 12 Euros to participate.

#2 How To Prepare Your Tomato-Proof Wardrobe

What to wear to the event? Well its messy, so old clothes are best. And bring a change of clothes too. You’re going to get totally soaked by the tomatoes and from being hosed down afterwards.

Also you’d think flip flops or sandals would make sense for this reason. But actually you’re likely to get your foot stomped on at least a few times. It’s better to wear old trainers.

#3 The Best Way To Protect Your Eyes And Camera

If you want to take photos or video, make sure your camera is totally waterproof. Last, but not least, you can opt to wear goggles. They do tend to get dirty quickly though. If you object to wearing goggles, keep your head down.

¿Suena divertido? Sounds like fun? I assure you it is. It’s hilarious and chaotic at the same time.

If big crowds and tomatoes don’t bother you at all, then I’d highly recommend checking out La Tomatina at least once in your life time!

And what a great way to practise your Spanish in a real-life setting. With the excitement of participating in the world's biggest food fight, I'm sure you'll be less self-conscious about trying out your Spanish.

If you're serious about going, you might find these Spanish travel phrases or this guide to Spanish slang useful to help you brush up on your Spanish before you go.