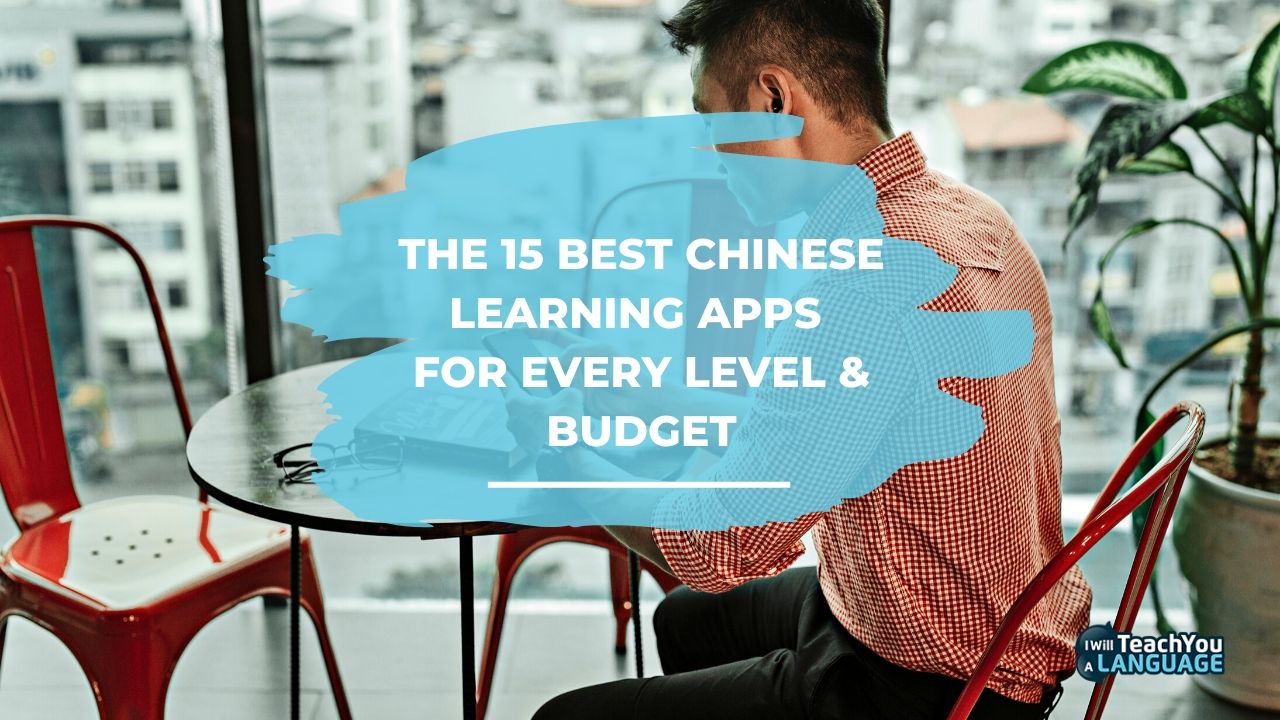 The 15 Best Chinese Learning Apps For Every Level And Budget

When you learn Chinese, the good news is that you won't struggle to find Chinese learning apps and other resources to help you master the language.

In fact, when it comes to resources, learners of Chinese have a big advantage because, although it’s not the easiest language to learn, the wealth of study materials now available makes your job a lot easier.

In the last few years especially, many excellent Chinese learning apps have appeared that can help you get to grips with what has traditionally been thought of as one of the trickiest tongues to master.

Normally, I'm wary of apps. (The App Villain is among the language learner's greatest enemies)

But far from being gimmicky games or glorified wordlists, many of these Chinese learning apps provide real value. And to help you choose which ones to go for, here’s my pick of the best 15.

By the way, if you want to learn Chinese fast and have fun you might want to skip the apps below altogether. Why?

My top recommendation is Chinese Uncovered which teaches you through StoryLearning®.

It’s as fun as it is effective. And you can access it anywhere – on your phone, on your computer, it doesn't matter!

If you want an app that can genuinely help you with Chinese characters, Skritter leads the way.

With this app, you can practise writing and recognising characters as well as learning the way they are pronounced. You can choose to learn from pre-made lists – including official HSK word lists.

But one of the best features is that it allows you to create lists of your own.

You have to pay a subscription for the full app. But if you’re serious about Chinese, a six-month or one-year subscription is good value. And it’s more than worth it! Click here to get 10% off your first Skritter purchase.

Chinese Skill is an app with an impressive amount of free material and is a good choice, especially for beginners.

It’s fun to use with lots of cute pictures and gamification. But it also incorporates videos with native speakers, listening exercises, reading practice and much more.

There’s a premium section if you’re willing to pay. But there’s loads of stuff, even if you just want to learn for free.

Hello Chinese is another cute app that is both fun to use and highly educational.

It is similar to Chinese Skill in some ways. And its advantage is that there is lots of material and interactive exercises, meaning you can pick up plenty of new language with every lesson.

With this app, you can start right at the beginning, learning basic words and expressions, practising your pronunciation and learning to write characters.

Gradually, you will build up your knowledge. And there’s also a paid section offering even more chance to practise your Chinese. This is another recommended app for beginners.

One of the things that makes Chinese more difficult than other languages – especially at the beginning – is that you can’t practise reading because you don’t know enough characters.

However, Du Chinese bridges the gap by giving you simplified texts to work with that are tailored to your level. So it's ideal for learners at all stages.

By using this app to practise your reading, you will quickly enlarge your Chinese vocabulary as well as improving your reading and listening skills. Chinese is now easier to learn than ever before. And that’s mostly thanks to helpful apps like this one.

Lingo Deer is an app made by the same people who created Chinese Skill. The concept is a bit simpler since it’s mainly an app for learning new words.

But it’s fun to use, making it a great way to recycle vocabulary or pick up some new expressions when you have a little downtime.

This is the kind of app that wouldn’t be much use on its own. But when used in conjunction with other apps and coursebooks, it can be a useful aid in your quest to become proficient in Chinese.

M Mandarin is a fantastic reading practice resource that is suitable for students of all levels.

The app is based on comic strips that talk about a whole range of topics, including going through security on the Beijing subway, eating out in Shanghai, dating and even topical subjects.

It’s more than just comic strips, though, and is packed with plenty of useful features. This app is perfect for those times when you have a few minutes to spare. Stop checking your Facebook feed and read a quick story in Chinese instead!

Here’s another app that is full of great content that allows you to learn real Chinese in context. A far cry from the unsophisticated vocab list-style apps of the not-too-distant past.

You’ll find reading texts for all levels written in Chinese characters and pinyin. You can read them or you can listen to the texts being read out, and any new vocabulary items are highlighted and explained.

There are loads of other features to help you learn, too, including a new word bank, a playlist of your favourite lessons and more. This app is another great example of how much more advanced resources for Chinese have become compared to only a few years ago.

Chineasy provides a simple way of remembering Chinese characters by incorporating them into cute images to help fix them in your memory.

It also lets you practise drawing them, starting with simple and common ones before progressing to more complicated or less frequently seen characters.

This is not a complete Chinese course. But many people will find it fun to use and a worthwhile addition to the other materials they rely on to learn.

Drops is an app that will help you increase your stock of vocabulary through repetition. In some ways, you could argue that it isn’t much better than many of the unsophisticated word-list apps of yesteryear.

However, it’s visually-appealing, fun to use and very user-friendly, meaning it could be another useful addition to your Chinese toolkit.

It’s a resource that can be used to supplement your learning with a quick five minutes a day rather than being one of the primary apps you use for your study.

Busuu allows you to learn several languages. Although be careful when you sign up because the first language is free. But if you want to change, you have to pay!

What makes this app stand out from the crowd is the fact that when you do a written exercise, other users can see it. And native speakers can comment or make corrections for you.

You can also help other learners by correcting their exercises in languages you know, and this creates a great sense of community, with Busuu users around the world helping each other learn.

I love this concept, and for this reason, I think this is an app that’s worth trying.

The Innovative Languages app is more traditional. But it’s still a useful resource that can help you with your Chinese learning. It’s been around for a while, and its advantage lies in the amount of material it now contains.

There are loads of lessons based on dialogues that you can use to improve your listening and reading skills, increase your vocabulary and work on your grammar.

You have to pay for a subscription. But some of the plans are very reasonable. And you can try it for a week for free, meaning you’ve got nothing to lose. Another useful app that’s well worth checking out. See my review for more info.

Language learning requires plenty of input, that’s how we learn, and many of the apps above are perfect for that part. But you also need to practise what you’ve studied, and that’s where Tandem comes in.

This app is not specifically for learning Chinese. It’s an app that connects you with language learners from around the world to practise together.

You can use it to find speakers of almost any language. But as you might imagine, there is no shortage of Chinese speakers wanting to practise English. So for anyone learning Chinese, it’s always easy to find a partner.

HelloTalk is similar to Tandem in that it’s a platform that puts language learners together to help each other practise. So if you’re looking for a Chinese native speaker to set up a language exchange, this is another great option.

This app also includes a few extra features that Tandem doesn’t have.

One thing I love is that it allows you to post “moments” with your comments in Chinese (or any other language). Then other users can see your moments and give you a “like” – and they can even correct any mistakes in what you’ve written.

Flashcards sound like the antithesis of the vibrant and fun apps that exist for learning nowadays.

The idea of making a stack of cards and then mechanically learning them one by one doesn’t sound like much fun compared to reading comic strips, listening to stories or playing games.

However, there’s still a place for flashcards as part of a wider learning strategy. And the advanced features included in Flashcards Deluxe make it worth a look.

You have to pay for the full version. But it’s a one-time purchase and doesn’t cost much, and in my opinion, it’s easily worth the money.

I have to mention Duolingo, the world’s most popular language-learning app. The thing about Duolingo is, when used alone, it’s not actually that useful.

Some of the sentences it gives you can be pretty bizarre, it’s light on grammar. And compared to some of the other apps on my list, it now feels quite dated.

However, if you do a couple of lessons each day, it can help fix vocab in your head as well as teach you a few new words. And just for that reason, it’s still worth using.

Not long ago, most language apps were nothing more than word lists. And since we don’t learn languages that way, none of them was particularly useful.

However, nowadays, many Chinese learning apps exist that teach you real language in authentic contexts, allowing you to understand, internalise and retain the new language you meet.

One of the keys to learning a language is to make use of a broad range of materials rather than relying on just one or two resources. And with the amount of genuinely useful apps now available, for anyone learning Chinese, finding materials could hardly be easier.