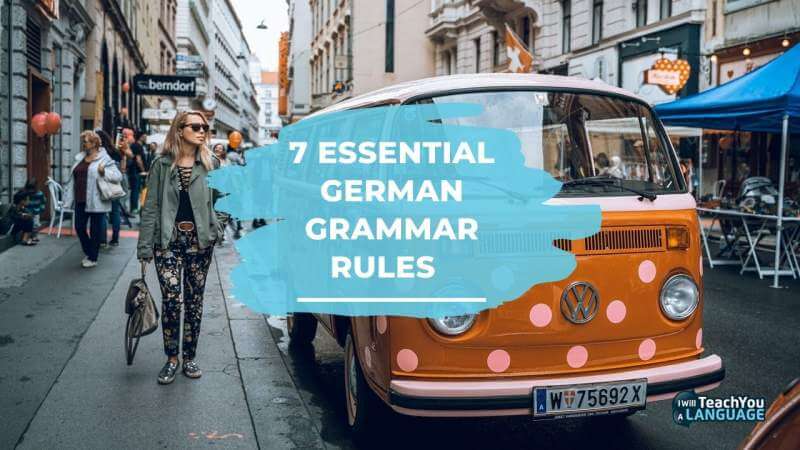 If only you could learn German by just memorising translations of words – why isn't language learning that simple?

Well, the reason is, every language uses different grammar rules to build sentences. Grammar is the framework that creates the structure of every sentence.

Essentially, grammar is a set of rules that helps you communicate accurately by composing sentences in specific ways. In this article, you'll find out the seven basic German grammar rules beginners need to know to start speaking the language right away.

German sentences appear to follow some sort of jumbled English grammar. So how do you know where to place those nouns, adverbs, adjectives, and verbs?

German grammar is actually simpler than you might imagine. (Despite what the Grammar Villain would have you believe). And by focusing your efforts on the most important rules, like the ones you'll discover in this post, you'll save time and energy. And start expressing yourself in German sooner.

With German Uncovered you’ll use my unique StoryLearning® method to learn tricky German grammar naturally through stories. It’s as fun as it is effective.

1. German Verbs Come Second, Most Of The Time

Don't worry! Verb position is one of the most straightforward grammar concepts in German. Typically, the verb (the word relating to an action) comes in the second position of a sentence. Take a look at the following examples.

As you may have noticed, these sentence structures are very similar in both English and German. However, when you want to ask a question, you have to move the verb to the first position.

Double verbs, separable prefixes, conjunctions, and modal verbs complicate these rules slightly. However, the rules for these cases are also relatively straightforward. Learn more about verb position in German.

You may have noticed that the last sentence example capitalized the word Medizin (medicine). In German, nouns (words that name people, things and places) are always capitalised. Below are more examples.

3. There's A Time, Manner, And Place For German Adverbs

Adverbs, as you probably remember from school, are words that modify verbs, adjectives and even other adverbs. In English they often (but not always) end in “ly” – “quickly”, “angrily”, “actually”.

In a sentence, adverbs tell us about how, when, how often or where something happens.

Adverbs of manner indicate how something happens and include words such as:

Finally, adverbs of place describe where an action takes place. Some examples include:

Below are some examples of how to put the “time, manner, place” rule to practice.

This rule doesn't exist in English. But you'll be glad it exists in German. There's no need to think about how to structure your sentences. Simply follow the rule.

One of the more complicated grammar concepts for native English speakers to grasp is that words have genders. In German, you have three different cases to choose from: masculine, feminine, and neuter.

The case system can take time to learn but follows clear grammatical rules. Make sure you learn the gender of a word, every time you add to your German vocabulary.

Sometimes, you'll have to memorize which gender a word has. Other times, you can figure out the gender from the word ending.

Job positions are also distinguished by gender. Take a look at the following examples:

Knowing the gender of nouns is essential to formulating the rest of your German sentences. You'll also need to understand the elements of your sentence.

The articles (a/an/the in English) change depending on whether a word is the subject, direct object, indirect object, or possessive object.

If you're already familiar with sentence structure in English, you'll find it easier to identify the subject, direct object, and indirect object of a sentence.

Let's look at an example:

The graphic below gives an overview of the German cases.

As you can see, choosing the correct translation of “the” and “a” requires some thought at first. Don't worry, even if you choose wrong, native speakers will still understand you! The more you practice, with plenty of exposure to German through reading and listening, the less you'll have to think about which ending is right.

If you want to learn more, check out this 5 Part Guide to Finally Understanding the German Case System.

As if having to choose from three different noun genders wasn't challenging enough, you also have to watch out for German adjective endings.

That's right, depending on the case, you'll have to decide which ending is appropriate for the preceding adjective. The good news is, there are straightforward rules to help you determine which adjective ending to use.

Let's take a look at the range of possibilities.

Both the gender of the word and its role in the sentence determine which case and endings to use. It sounds scary but it will become second nature, especially if you look out for these changes as you read and listen to German.

Unlike English, you can't always just slap an -s onto a word to create the plural form in German. The German language forms plurals in multiple ways. Some common plural endings are -e, -er, -en, -n, and -s.

Below are a few examples.

Add an -e ending to nouns ending in -eur, -ich, -ier, -ig, -ling, and -ör. Many feminine words that are single-syllable also add an -e, as well as an umlaut.

Add -er to most single-syllable neuter nouns. An umlaut may also be necessary.

As in English, some German nouns are the same in both their singular and plural forms. In this case, only the word's article reveals which form is intended.

For example, der Löffel (the spoon) becomes die Löffel (the spoons). There are also several exceptions to the above rules that you'll have to become familiar with through immersion in German.

Although German sentence structure may not seem to make sense, at first sight, there are specific rules behind the apparent chaos.

Fortunately for you, many aspects of German grammar follow straightforward rules and have few exceptions.

However, many of these rules take time to learn. The good news is that as you listen to German podcasts and read German books, these rules will become second nature to you. But you will need to immerse yourself in the language for this.

The seven essential grammar rules above will help you dive right into German as a beginner. And get you started so you can connect with native speakers.

Even if you haven't mastered German grammar, continue to practice the language. German speakers will still understand you if you make mistakes. And will applaud your effort to learn their language!

Now that you know some basic German grammar, you might be even more excited to learn the language. But you're probably still wondering how you can make the essential grammar second nature, so you can use it effortlessly in conversation.

Well, in German Uncovered, my story-based beginner course, all the learning happens in the context of a page-turning tale. You learn the key vocabulary and grammar of German as you read the story, with guidance from an expert German teacher.

Thanks to the compelling content, you learn and retain the language better than in traditional methods where you learn grammar or vocabulary in isolation, without a rich context to make the meaning clear.

So if you're a German beginner who'd like to reach intermediate level without wrestling with tricky German grammar points, make sure you check out German Uncovered.

With this course, you learn to speak German through a fun and natural method that makes learning a pleasure, and grammar a breeze! And who doesn't want that!?

Are you feeling more confident about basic German grammar after reading this post? Which German grammar points do you find tricky? Let me know in a comment below.