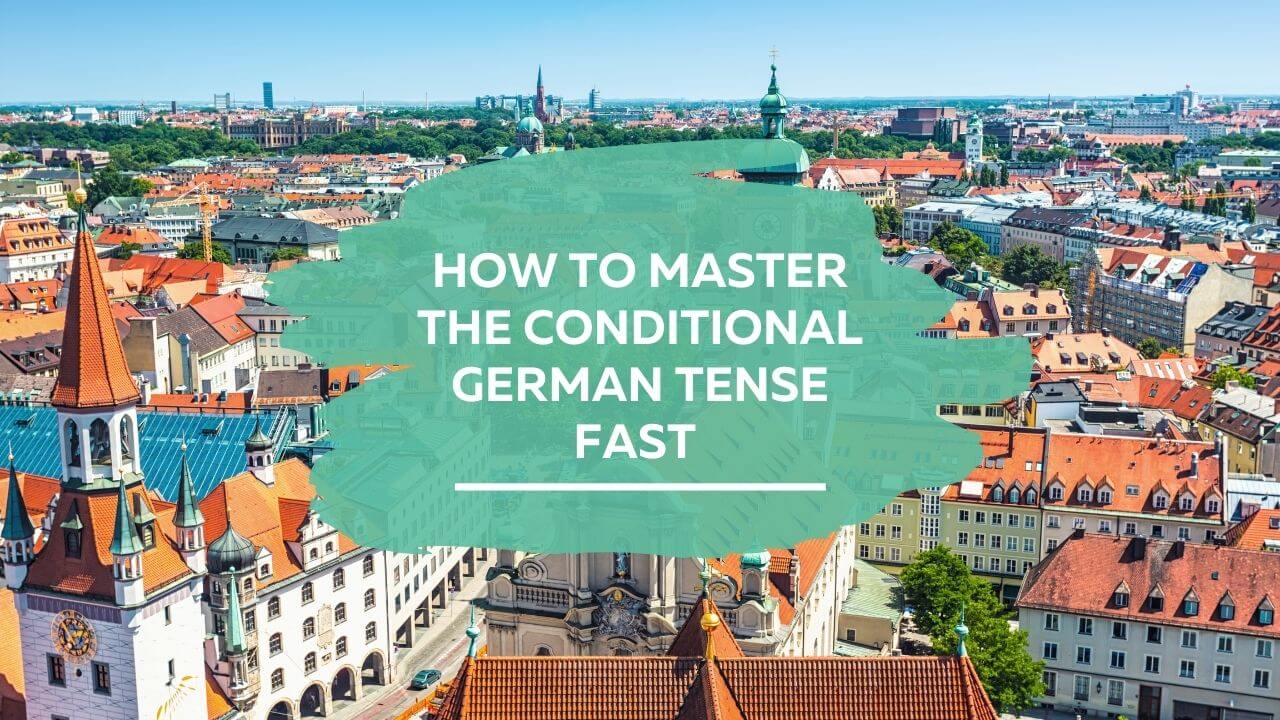 How To Master The Conditional German Tense Fast

As you learn German, you'll soon see that the German conditional tense comes up frequently in spoken and written German every day. You can express yourself more fluently in your German conversations by learning how to form conditional phrases.

In this post, you’ll learn how to use the subjunctive form in German, ask questions about hypothetical situations, make statements, and tell stories fluently without struggling with grammar!

The German conditional tense is easy to learn, even if you have been studying German for a while without mastering it. So, let’s dive right in.

What Is The German Conditional Tense?

The conditional is used in English and German to communicate something that “would” or “could” happen “if” specific circumstances are met.

You can convey any facts, fiction, or fantasy, from unimaginable past encounters to hypothetical futures that have yet to be seen.

In English, we use “if” to express the concept of a condition. For example, “if I got a new job, I would buy a house” is a conditional sentence. In German, the process is similar but has a different name.

Conditional sentences in German use the subjunctive form or Konjunktiv, which is like the present, past, and future tenses. Verbs in the subjunctive take a form of their own, but fortunately, you don’t have to remember every form of every verb.

The German word wenn translates to “if” in English. Wenn is used to introduce dependent clauses that you use in the subjunctive. But there’s a little more to the conditional than simply throwing wenn into your sentences and changing verbs into their subjunctive forms.

Let’s first take a look at how conditional sentences are formed.

How To Form Conditional Sentences In German

There are different ways to form Konjunktiv clauses in German, depending on the situation. The Konjunktiv I and Konjunktiv II are the two forms Germans use to create conditional sentences.

Although the explanations may sound complex, I promise that these concepts are more straightforward when you put them into practice.

First, let’s start with the conditional or subjunctive, also known as Konjunktiv II, in German, since you frequently need this form. The Konjunktiv II is considerably easier to form than you may believe, and you can do it in two ways.

The first uses an auxiliary verb, werden (to become), whereas the second modifies the imperfect.

Some verbs like haben, sein, and German modal verbs are used without the auxiliary. In these circumstances, the verbs retain their imperfect tense conjugation stem but receive an umlaut and an “-e” if necessary.

Let’s look at eight verbs and how they change in Konjunktiv II.

Every verb has a subjunctive form, but not all verbs receive umlauts or vowel changes. Whether your verb is regular or irregular, the subjunctive form is always based on simple past conjugation patterns.

Luckily, you only need to remember the forms of the eight verbs above. You can avoid learning their subjunctive forms for all other verbs and use a form of werden (to become) instead.

Let’s look at the different ways to conjugate werden.

A few examples can help you understand how to build sentences with werden.

Notice how the auxiliary verb werden is the only verb you need to conjugate in the sentence after the wenn clause. The primary verb remains in its infinitive form.

Next, let’s explore using conditional sentences with werden in the past. This form is essential for speaking about what could have, should have, or would have been different in the past.

Conditional Sentences With Werden In The Past

The Subjunctive II is only available in two tenses. First, the “present,” as seen above, and second, the indefinite past. Because of the unreal character of the subjunctive, these two are uncertain.

For example, the sentence “If you had the money, you’d travel the globe” might refer to a possibility in the future. In contrast, the remark “I wouldn't have stayed home if it hadn’t rained” relates to an imaginary moment in the past.

Using the past in Konjunktiv II is difficult but not enough to trigger a meltdown!

If you’re familiar with the German past tense, you probably remember that a form of haben or sein always accompanies a verb in the present perfect. The same rule applies to subjunctive verbs. Only here, you’re using the past tenses.

The German Konjunktiv I

You’ll rarely use the German Konjunktiv I because it is outdated and typically only used in literature. But you may still want to know how to recognize the form when you see it.

There are four tenses in Konjunktiv I: the present, past, future, and future perfect. In Konjunktiv I, the auxiliary or helping verb is conjugated.

If you feel like expressing yourself with literary eloquence, you can use the Konjunktiv I to amaze your German-speaking friends.

Constructing Konjunktiv I is a relatively simple process. Unlike Konjunktiv II, which you create from the root of its imperfect conjugation, take the present tense stem and add the same endings as before.

Let’s look at the verb haben in the Konjunktiv I.

The verb sein is the second essential verb you need in Konjunktiv I.

Although this is a critical ability to learn if you want to improve your written German, I can't emphasise enough how rarely this form is used.

You can practice recognising it in online newspaper accounts and see if you can tell the difference between what a person did and what a person is claimed to have done.

Using the subjunctive in German allows you to express various conditional sentences with incredible accuracy. Consider the following examples.

In the first example, you talk about a situation that is certain to take place.

But in the second example, you are speaking about a hypothetical situation and what would or could happen but probably won’t.

In the third example, you speak about a hypothetical situation in the past that didn’t happen and can no longer happen.

Learning how to form the German conditional tense using the subjunctive form or Konjunktiv I and Konjunktiv II is a fast way to improve your German language fluency.

The Konjunktiv II is the easiest way to form conditional sentences, especially since, in most cases, you only need to remember nine verb conjugations. I hope using the subjunctive helps you express yourself more clearly the next time you’re conversing in German.

To help you pick up and use the German conditional tense even faster, make sure you use the StoryLearning® method. As you immerse yourself in German books, you'll spot conditional sentences and they'll soon become second nature.