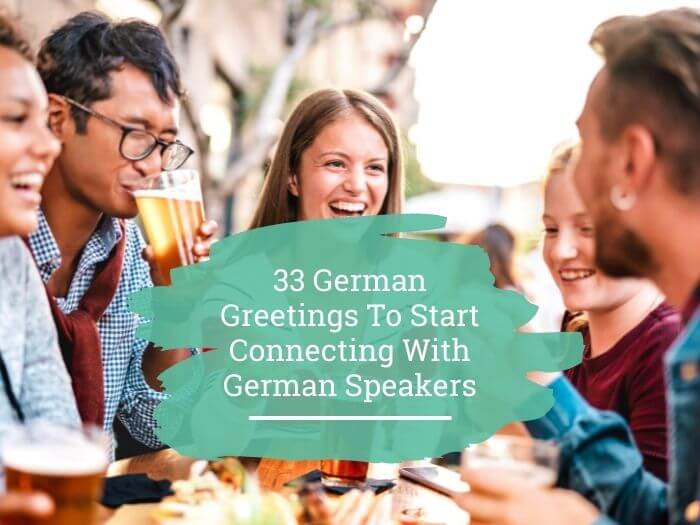 If you're just starting out learning German, then a good way to connect with people is to learn German greetings.

Greetings are a cornerstone of any language. The way we greet one another says a lot about our culture and how we interact.

If you're new to the language, you may wonder what the best way to greet a German person is. The good news is that there are plenty of options.

You might be surprised at how easy it is to learn German greetings! You don't need to memorise long sentences or try out weird pronunciations.

Just a few keywords will do the trick. You can quickly get comfortable with some simple phrases and then practice them with your friends.

The first step in mastering any language is learning the basics: greetings and farewells. Once you've got these phrases, congratulations. You're ready for your next challenge: using them in real life.

The Question Of Formality In German Greetings

In Germany, there are many ways to say hello and goodbye. While some greetings are very formal, others are more casual. When learning German, you can find yourself confused about whether a specific greeting is appropriate for the situation or not.

In Germany, there are two different ways of greeting someone:

The basic rule is to use Sie when addressing one with whom you don't have a close relationship.

For example, if you're meeting someone for the first time or if you don't know the person very well. People often siezen (the verb to use Sie) each other in the first meeting but then switch to the informal du later.

When addressing more than one person, use ihr (you guys). If the person has a title like Herr or Frau and you're not sure if they would prefer Sie or du, then it's best to ask them directly.

You can ask, Darf ich Sie duzen? (May I use du?) or let someone know, Sie können mich gerne duzen. (You are welcome to use du with me.)

The 33 Most Common German Greetings

Before we get into these German greetings, here are a couple of body language tips for greeting Germans.

Germans greet each other with a firm handshake and direct eye contact (which seems weird if you're not used to it!).

In general, men shake hands with women, and women often greet other women with a Bussi (kiss) on the cheek.

Guten Tag is the most common way to say hello in Germany. It means “good day” and is used in formal situations.

You can also use guten Morgen (good morning) to greet someone until about 11 am.

Use guten Abend (good evening) from about 4 pm until midnight.

From midnight until 5 am, you can let others know you’re going to bed with gute Nacht (good night).

This one can be used as an alternative to Guten Tag. It's just slightly more formal and religious than its secular counterpart. It may sound strange coming from an atheist, but Germans use this all the time. They'll often say it when meeting a friend on the street or at work.

In English, the equivalent is, dear ladies and gentlemen. If you’re talking to one individual use sehr geehrte Frau (name) or sehr geehrte Herr (name).

Informal German greetings are used among friends, family members, and acquaintances. You can also use them in casual situations where there is no need to show respect or deference towards the other person.

Hallo is another simple greeting that works well in most situations. It's informal but not too casual (like Hi), so it works when meeting new people or talking with friends.

Greet close friends with a cute and perky Hallöchen.

When greeting a group or room of people, hallo zusammen is a common way to address everyone.

Another common way to say hello in Germany is Tag. It's more informal than Guten Tag or Moin but not as relaxed as Tschüss.

How’s it going, is another casual German greeting. If someone asks youWie geht es?, they're not just asking how you are. They're asking how your life is going.

So, if you're tired, stressed, or down, don't be afraid to say something like, Es geht mir schlecht heute (I'm not feeling well today).

What’s up is an excellent way to greet your German friends as you join them for an activity. You can ask, was geht? For short.

If you happen to walk past your coworkers during lunch, don’t hesitate to yell out a loud Mahlzeit. The word means mealtime in English and is a friendly way to wish someone Bon Appétit.

In written German, use Liebe Frau or Lieber Herr (name)  to greet someone you know. It’s equivalent to the English Dear (name).

Greetings in Germany differ according to where you are and the relationship between the people greeting each other. Depending on the region of Germany you're visiting, you may hear variations.

This is a common way to say hello in northern Germany. It means “morning” and is more casual than guten Tag. This is an informal way for people to say hello. It's like how we might say “hey” or “what's up?”

It's not very formal, so it would probably be inappropriate for a job interview or other formal setting. You might hear Moin Moin in Niedersachsen. In southern Germany, you might say only Moin.

In Switzerland, Grüzi is a standard greeting and is short for Grüß dich (hi you). In southern Germany, you might say Grüß di to a friend.

If you find yourself in southern German, you’ll need to break out the Servus greeting. It’s like saying cheers, but means “at your service”. This greeting is standard in Austria and southern Germany.

As a local greets you, you might hear Salü (salute) in southern Germany.

The word for the little day or Tagchen is a cute greeting you might hear in eastern Germany.

In eastern Bavaria, you can say it’s an honor to meet someone by greeting them politely with Habediehre.

If you find yourself in Baden-Württemberg, you can say farewell with a simple Ade.

How To Say Goodbye In German

There are just as many ways to say goodbye in German as there are ways to greet someone.

This is the most common way to say goodbye in Germany. It means “bye!”

Make your goodbyes to your friends and children cuter with Tschüssi. It means the same as Tschüss but is more like bye-bye in English.

This greeting means, “well you?” It’s an informal way to ask friends and acquaintances what’s up.

Ciao is not only a short and frequent way to say goodbye in German but also in all of Europe.

If you plan to see a friend again but don’t have a specific time or place to meet again, use Bis später.

This informal farewell means, until then. Use bis dann when you have plans to meet someone again soon.

When talking on the phone with someone, auf wiederhören is the best way to say goodbye. It means until the next hearing.

Auf wiedersehen is a formal way to say farewell.

Wish someone a happy weekend with schönes Wochenende.

Mach’s gut in German means take care. Use this goodbye in informal situations.

This goodbye means have a good night off. When all the work is done, tell your coworkers schönen Feierabend as they head out the door.

Schlaf gut (sleep well) is how you say good night to your roommate or someone on their way to bed.

Greetings and farewells are an essential part of social interaction. They form a basis for conversation and can help you make new friends. Greetings can be formal or informal, depending on whom we greet or greet.

Now that you know all the 33 German greetings above, it’s time to go out and meet new German speakers! The more you practice speaking German, the more fluent you’ll become.

In the meantime, make sure you apply the StoryLearning method and read and listen to stories in German. As you read, you'll pick up these German greetings naturally, without having to memorise them.