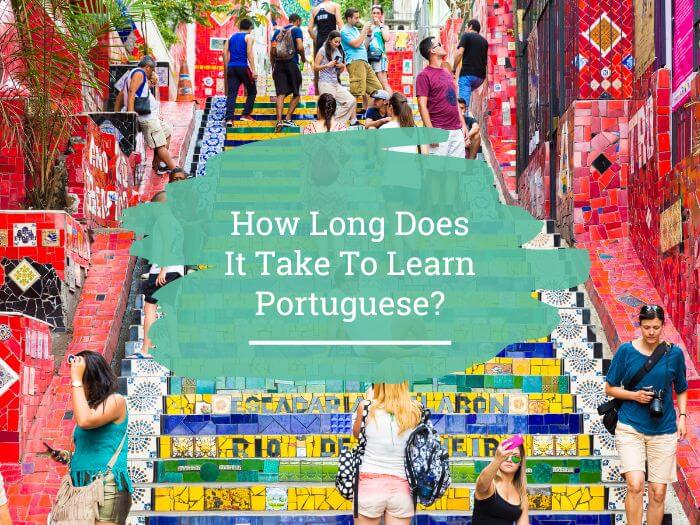 How Long Does It Take To Learn Portuguese?

Every student who starts learning Portuguese or any new language wants to know the answer to this question: how long does it take to learn Portuguese?

One thing's for sure – you won't get fluent in Portuguese overnight. Learning any foreign language requires hard work and demands practice.

There are plenty of variables and skills involved in this process, not to mention the obstacles. Some are common to most people and other are very personal.

In this post, you're going to discover the factors of acquiring any new language that can speed up or slow down anyone's progress. By the end you'll have an answer to the question: how long does it take to learn Portuguese?

When it comes to answering the question: how long does it take to learn Portuguese?, first you must reflect on some relevant questions that will affect your personal time frame to learn the language:

If you were able to answer these questions, now you can face all the information involved in the process and check if it matches with your expectations.

It's Not Just Your Age

Cognitive scientists from Boston College, MIT, and Harvard say there's a critical window to learn a language. They have found that the brain learns best before the age of 17 years.

After this age, it will theoretically be more difficult to become fluent. They believe it happens because of social factors or maybe by a decline in brain plasticity.

On one hand, young learners pick up a language quickly, but they can forget it fast too. On the other, the older you get, the more mature your brain is and the more experienced it is to face new challenges.

So, your age offers advantages and disadvantages, but it's neither the only nor the most important variable in the process.

The French neuroscientist Stanislas Dehaene says new learning is controlled by the prefrontal cortex in a mindful slow rhythm.

To become automatic, practice is required and a good night of sleep is key for consolidating learning, because it's when gathered data is transferred to memory.

There are several other factors to consider, including your previous linguistic experience, your native language, your availability to study, your exposure to the language, and even psychological aspects. Let’s dive into what influences your learning.

The Written Pattern Of Portuguese

Every official language may differ from country to country where it is spoken. For example, Brazilian and European Portuguese are somewhat different.

You can compare them to the differences between American and British English. They are mutually intelligible, but there are different dialects related to regions and culture in daily conversation.

The good news is that there is a Community of Portuguese Language Countries that established an orthographic agreement and linguistic rules to standardise written Portuguese regarding publications and international documents.

That facilitates developing your writing skills at least. Imagine if you had to adapt your writing according to the rules of each Portuguese-speaking country. There are 10 worldwide.

If you live in one of these countries, it will be easier for you to find opportunities to practise your speaking and listening in real situations.

You must take advantage of that, though you can learn the language even if you don’t live in a Portuguese-speaking country.

And if you're not concerned about writing and want to speak Portuguese fast, then you should look at the estimated time frame of learning the language next.

How Long Does It Take To Learn Portuguese?: Estimated Length Of Time

There is an estimated time frame to learn each foreign language if you are a native English speaker, according to the 70-year experience of the Foreign Service Institute (FSI), teaching the US government personnel.

They know the average length of time usually required for a student to reach a so-called “professional working proficiency” in each language.

So how long does it take to learn Portuguese? Well, the FSI puts it in the group of the most similar languages to English. The institute estimates that it takes 24 weeks to learn Portuguese if you study 600 hours. Twenty-four weeks is the same as six months.

So, based on this estimative, you need 100 hours of study per month or 25 hours per week to learn Portuguese if English is your mother tongue. It means spending 5 hours a day for 6 months.

It would be an intensive course, for sure. Maybe you don’t have this availability. You have your career, your family, your leisure time, and other interests to attend to. In this case, you need to extend your deadline.

So, if you're in a hurry and are not available to study hard in the short term, you should start studying as early as possible to achieve your goals.

Some factors can make a language easier or harder to learn. Research shows that bilingual people usually learn new languages faster than people who only know one language and have never studied a second one.

Another aspect supported by specialists: the closer a language you are studying is to your native language, the simpler the process is. This topic sends us to the origins of the languages.

Once the lexicographer John Whitlam said: “To really understand how a language works, you have to go to the roots of it”.

Portuguese has a Latin root, so if your mother tongue has the same root or if you already know other Latin-based languages, this is an advantage.

Among the Romance languages we can find not only Portuguese, but also French, Italian, and Spanish. And what about English?

Although English isn't derived directly from Latin like Portuguese, both languages have the same origin: an ancient language called Indo-European, the mother of Latin and tens of other languages.

As Latin was the only written language of the culture and literature for a long time in the past, biblical writings were all written in Latin. At a given moment, these scriptures had to be translated into Old English. So the English we speak nowadays inherited many words from Latin.

Thus, English became a written language under the influence of the Romance alphabet, as well as Portuguese. They both also follow the same sentence structure order with a subject, a verb, and a predicate. Latin and Christianity are the reasons why Portuguese and English are linguistic and culturally somewhat connected.

Portuguese And English As “Family Members”

If Portuguese and English were members of a family tree, they would be considered second cousins. It means they're not close enough to be intimate relatives, but they're also not far enough apart to be total strangers.

For instance, from Latin words such as praeoccupatio and consideratio were born the English words preoccupation and consideration and the Portuguese preocupação e consideração. They are very alike in spelling and pronunciation.

Check out a few more examples of cognates that prove similarities among the languages derived from Latin. It would be impossible to write all of them here because there are many.

In Portuguese Uncovered, just like my other Uncovered courses, you learn vocabulary quickly thanks to cognates like the ones below – words that look similar in English and Portuguese and that have the same meaning.

Is there anything else involved in learning a new language? Let’s imagine an iceberg. You can only see the tip of it, but you know there is a huge underwater part, right?

Well, let’s suppose the emerged part is what you have just read about learning a language: the skills, the length of studying, the origins, etc.

But there's an enormous submerged part you can’t ignore. It's made up of psychological factors that you should pay attention to in order to avoid delays or even giving up.

These psychological aspects are related to some difficulties students have in learning. Below you will read some sentences usually said by learners in a classroom.

As you read, you may identify or not with one, two or more and it will help you start a reflection on your own mindset:

Self-awareness is crucial for success. If you've ever had one of these feelings or thoughts, you're not alone. Many students feel this way. It's up to you to look for professional help. How motivated are you? How much is it a priority? How hard are you willing to try?

So, How Long Does It Take To Learn Portuguese?

So, how long does it take to learn Portuguese? Well, a new language is more than a bunch of new words. It is a whole new world, history, and culture.

However, if you are determined to learn a language, your curiosity is your fuel and your dedication is your engine, believe me. The aim is to encourage you to face this challenge because it will open your mind and your life opportunities.

Sometimes you just need to be more curious and less critical about yourself and about the process of learning. It is a life experience with ups and downs, highs and lows, just like a rollercoaster. Enjoy the journey.

Fortunately, Portuguese is among the easier languages for English speakers to learn. So even if you don't learn it quite as fast as the 24-week time frame suggested by the FSI, by going at a slower pace, you could expect to reach a decent level of fluency in 2-3 years.

And if you follow the rules of StoryLearning method and learn Portuguese by reading books in Portuguese, then you'll learn fast while enjoying yourself.