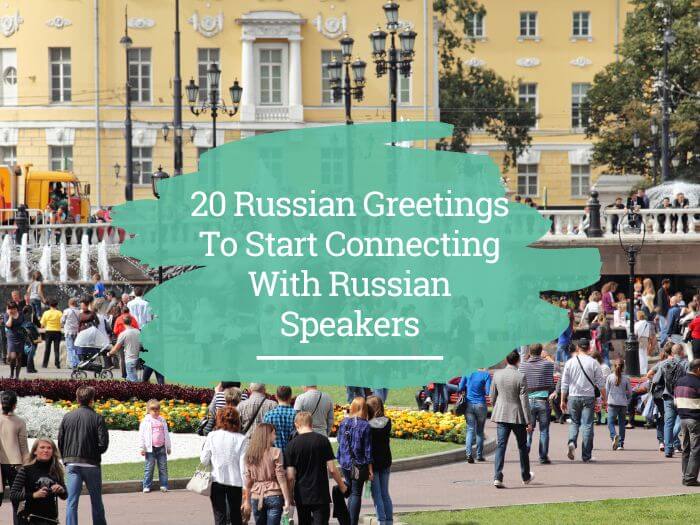 Imagine yourself walking down the street and you see someone that you know. How do you greet them?

Hello’s a good start, but there’s also “good morning”, “how are you?”, “welcome” and so much more. The point is – greeting someone is a lot more than learning just one word or phrase.

So get ready to impress you’re Russian-speaking friends and family with these Russian greetings and goodbyes.

One of the first things you’ll learn about the Russian language is that formality is pretty important. In fact, it’s so important that it’s hardcoded into the language.

The Russian verbs and pronouns you use in a given situation will change according to the relationship you have with the person you’re speaking to. By extension, you’ll use different forms of greetings and goodbyes, depending on the relationship.

Far and away, the most common Russian greeting that people know is привет (pronounced pree-VYET).

However, this is actually kind of informal in Russian and something people say to friends, family, and children. You wouldn’t say pree-VYET to your boss or a stranger.

If you’re in a more formal or official situation, then the Russian greeting you want is здравствуйте (ZDRAH-stvuy-tye). Although the first syllable is spelled здрав, the ‘v’ sound is often clipped off.

With these two words, you should be able to navigate through most greetings. However while the greetings привет and здравствуйте are some of the most common in Russian, there are also some other informal greetings.

These include здравствуй and здрасте which both come from the formal здравствуйте, but are used in much more casual settings.

You can also try out здорово (zdah-ROH-vuh) which is quiet slangy. It’s important to note the stress on здоворо.

And while you might be excited to see someone, it would sound weird to start the conversation that way.

Russian Greetings With The Time Of Day

While the general greetings are great, Russian speakers also use a lot of greetings based on the time of day. These are essentially the same as “good  morning”, “good afternoon” and “good evening”.

The thing to notice is that each word starts with a form of добрый (good) but as an adjective the ending changes to match the noun. So remember that it’s доброе утро and not добрый утро.

We’ve covered general greetings and greetings for different times of day, but now let’s get into more specific cases.

The go-to word for “welcome” is Добро пожаловать (dah-BROH puh-ZHAH-luh-vuht’).  It has a slightly formal tinge, but you can use it in most situations. It’s also good to recognize as something you’ll see in airports or hear on tours and in hotels.

Technically speaking, this isn’t a greeting, but it’s worth knowing as it's something Russian speakers say a lot. If someone is announcing their presence at home, then they simply say я дома (yah DOH-muh) which literally translates to “I’m home.”

If someone picks up the phone, then you have a different greeting word which actually sounds a lot like “hello”. You simply takes the receiver and say алло.

This is a bit informal, so some Russian speakers will tell you to answer the phone by saying an alternative greeting.

This expression simply means “I’m listening”. Since you can see who’s calling on phones though, the choice is yours.

Greeting Someone After A Long Absence

If you’re greeting someone that you haven’t seen in a long time, there’s a special phrase that you can use to really impress a Russian speaker:

This means “so many years/summers, so many winters” and it’s a well-established phrase for when you haven’t seen someone in a while.

Now let’s talk about saying our goodbyes in Russian. Just like greetings, you’ll use a different word depending on the situation.

Far and away, the most common way to say goodbye in an informal situation is with a simple пока (pah-KAH). The word itself actually means “until” or “for now” but you’ll hear it all the time. Sometimes this will be doubled (пока пока) to further show someone’s affections.

Another common way to say goodbye informally is with the international word чао which you would use almost exactly as you would ciao.

Very often when we say our farewells, we attach an addendum about when we might see someone again (until next time, until tomorrow, etc.) People do the exact same thing when speaking Russian with the preposition до (until).

You may already be familiar with до свидания (duhs-vee-DAHN-i-yuh) which is a good way to say goodbye that’s not too informal and not too formal.

Since these are set expressions, they are most often pronounced as a single word.

The words Прощай/прощайте translate quite accurately to the English “farewell” in the sense that they carry real weight behind them.

While you can say пока or до встречи after a coffee with friends, прощай(те) is reserved for situations where the next meeting will be far away or may never happen. You can expect to hear these words a lot in Russian drama films and romantic songs.

As mentioned before, formality is encoded into the Russian language, so there are two forms of прощай depending on the situation.

You should say прощай to one person and if you are close to them. If there’s more than one person or the situation is at all formal, then прощайте is the word you want.

There are plenty of ways to greet someone or give your goodbyes in Russian depending on the situation and your relationship with them.

And like a lot of things in Russian, the Russian words or phrases in Russian you use will change according to how formal you want to be. Just think of Russian slang compared to more standard language.

That being said, this list of Russian greetings and goodbyes will work for almost any situation. And one of the best ways to experience this as you learn is to follow the rules of StoryLearning.

As you read books in Russian or enjoy short stories in Russian, you'll see and hear the se Russian greetings in context over and over. That way, you'll learn them in no time.

So get out there and start practicing your привет and пока. And as always удачи из удач (best of luck!)