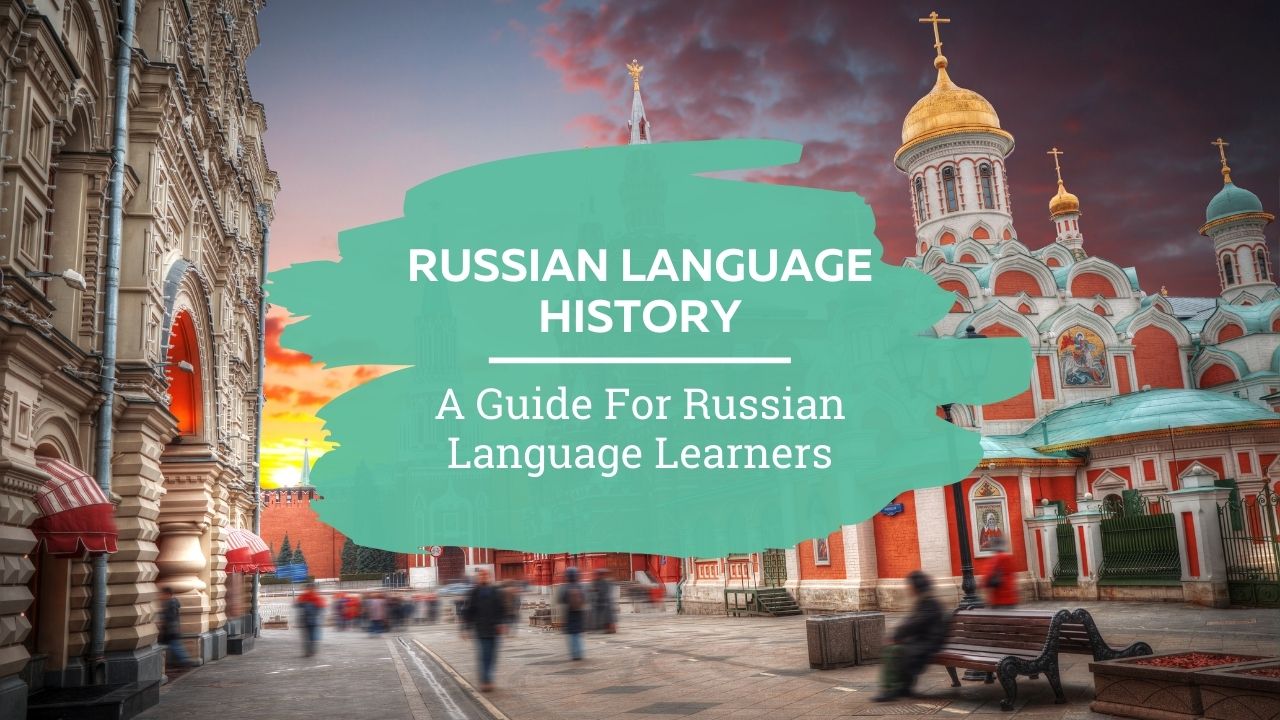 As you learn Russian, sometimes a bit of context, in this case Russian language history, can go a long way.

So this article is going to be less focused on noun declensions or verb conjugations. Instead, we’re going to take a look at the history of the Russian language itself.

That includes the role that Russian has played across history as well as the role Russian plays in the world today.

By the end of the article, you should have some answers to things like…

The Origins And Relatives Of Russian

If you ask linguists to classify Russian or talk about where it comes from, you’ll learn that it’s a widely spoken Eastern Slavic language…which is good to know, but what does that mean exactly?

Let’s start with a bit of basic linguistics. Languages are usually classified according to ‘families’ which are thought to have the same origin point.

Believe it or not, Russian actually belongs to the same language family as French, Swedish, Hindi, Farsi, and English. This is called the Indo-European family.

You can still see the relationship in some basic words:

The theory goes that all languages in the Indo-European family came from a single proto-language. Over time, this broke into different branches, one of which was the Slavic branch.

This language group includes Czech, Ukrainian, Serbian, Slovenian, Macedonia, and many others. The Slavic branch spread out into further subdivisions, including the East Slavic group we mentioned before.

This is the group that Russian belongs to, making it most closely related to Belarusian, Ukrainian, and Rusyn. However, within the whole of the Slaivc branch, Russian remains the most widely spoken language.

Before Russian fully emerged as a distinct language, the East Slavic languages were one group, creatively named Old East Slavic. It’s important to note that the divisions between different languages here are very, very blurry.

Within a small space, there could be plenty of dialect variation and the very idea of a standard language simply didn’t exist.

During the Middle Ages, the Russian language underwent several large sound changes. Ages ago, Russian had a lot more vowels and the consonant clusters that Russian is famous for today were separate with vowels.

However this changed until we got the challenging letter combinations found in words like “hello.”

To understand how Russian developed, it’s important to understand the region’s history at the time.

During the Middle Ages, one of the greatest changes to the Russian language came from the Golden Horde (Золотая Орда) which overtook large swaths of the former Kievan Rus’ in the 13th century.

This led to the монголо-татарское иго (Mongol-Tartar yoke). This is part of the reason that Russian has hundreds of words not found in most other Slavic languages.

Between the 13th and 16th centuries, the grammar of Russian also began to simplify. The different forms of the past and future tense began to merge and certain grammatical features fell out of use entirely or merged with other forms.

This is also the period which led to Russian’s famous frustration for learners known as akanye (аканье), which best translates to ‘making the ah sound.’

One of the first things you'll notice when you take on the Russian alphabet is the inconsistent pronunciation of the letter ‘o.’ It was at this time that the ‘o’ started to be pronounced like an ‘ah’ in certain places.

This is why молоко (milk) is pronounced as it is

It’s worth noting that at this point the Russian language had yet to be standardised. This means that the difference between dialects could be quite noticeable, both in terms of vocabulary as well as grammatical elements.

At the same time, Church Slavonic was the primary written language. As the name suggests, it was the preferred language of the church at the time and had significant influence on other Slavic languages, including Russian.

You can think of this in the same way that throughout much of medieval Europe, people would speak their local languages, but most written texts were done in Latin.

Peter The Great And Modernization

One of the most important influences on the modern Russian language was Peter the Great (Петр I Великий). The Tsar did two things that changed Russian to look much more like how we know it today.

First, he enacted policies to simplify the writing system. This eliminated some superfluous letters and simplified the spelling. It also was the first real attempt to give the language any sense of standardization.

Peter’s other effect come from his policies of модернизация (modernization). This was the policy of opening up to the countries of western Europe. As part of the policy, a huge number of new ideas, technologies and theories came into Russia.

As a result, Russian took on a huge stock of words from the languages of Western Europe, like French, Italian, German, English, and Dutch.

In this era the aristocracy of Russia (and most of Europe) regularly used French as the language of high society. Naturally, a large number of words entered into the language.

The Russian Language During The Soviet Union

One of the largest events to shape the Russian language was the formation of the USSR. Russian was recognised as the language of interethnic communication and for decades it was widely used throughout the Soviet Union as well as by neighbouring countries.

This had several huge impacts on Russian. With the advent of radio and newspapers becoming more widespread, this led to a situation wherein the ‘standard Russian’ quickly became preferred over local dialects.

This also brought the Russian language into several countries which brought in a huge stock of new words, especially from the Caucasus and Central Asia.

And one of the most noticeable changes was the huge amount of new jargon, abbreviations, and specialized vocabulary that was created to describe, discuss, and debate the Soviet system.

The Spelling Reform Of 1918

If you were to pick up a Russian newspaper from the beginning of the 20th century, the Russian would look quite different from how it does today. For one, it would be filled with several letters not used today and several extra letters you might not be used to seeing.

Additionally, the ъ (твердый знак / hard sign) in final position following consonants was dropped. This changed words like миръ to their modern spelling мир. It’s often stated that by removing the твердый знак, the length of Russian texts decreased by one-thirtieth.

The Next Changes To The Russian Language

One of the largest factors for the Russian language in modern times has been the collapse of the USSR (распад СССР).

This event, coupled with globalisation and then shortly followed by the explosion of Internet use led to the Russian language absorbing a huge amount of new vocabulary.

These days, Russian borrows, tries out, and occasionally keeps plenty of words from around the world. However most of these come from English.

Of course, any new word that russian takes in can be further adapted and take on prefixes or suffixes.

And of course, people are still coming up with new words from older Russian ones, or taking old words and repurposing them

The Role Of Russian In The World Today

Today, the Russian language remains a hugely important language throughout the world. There are loads of countries where Russian is spoken and plenty more that have large populations of Russian speakers.

Likewise, Russian is used in loads of international contexts. Today, it’s used as a lingua franca for interethnic and international communication throughout Central Asia and Caucasus region.

Additionally, Russian holds status as one of the official languages of the United Nations and is used in various other international organisations.

So there you have it! This was only a short overview on the history of the Russian language and if you’re interested there’s a lot more to look into.

Now you should have a good understanding about