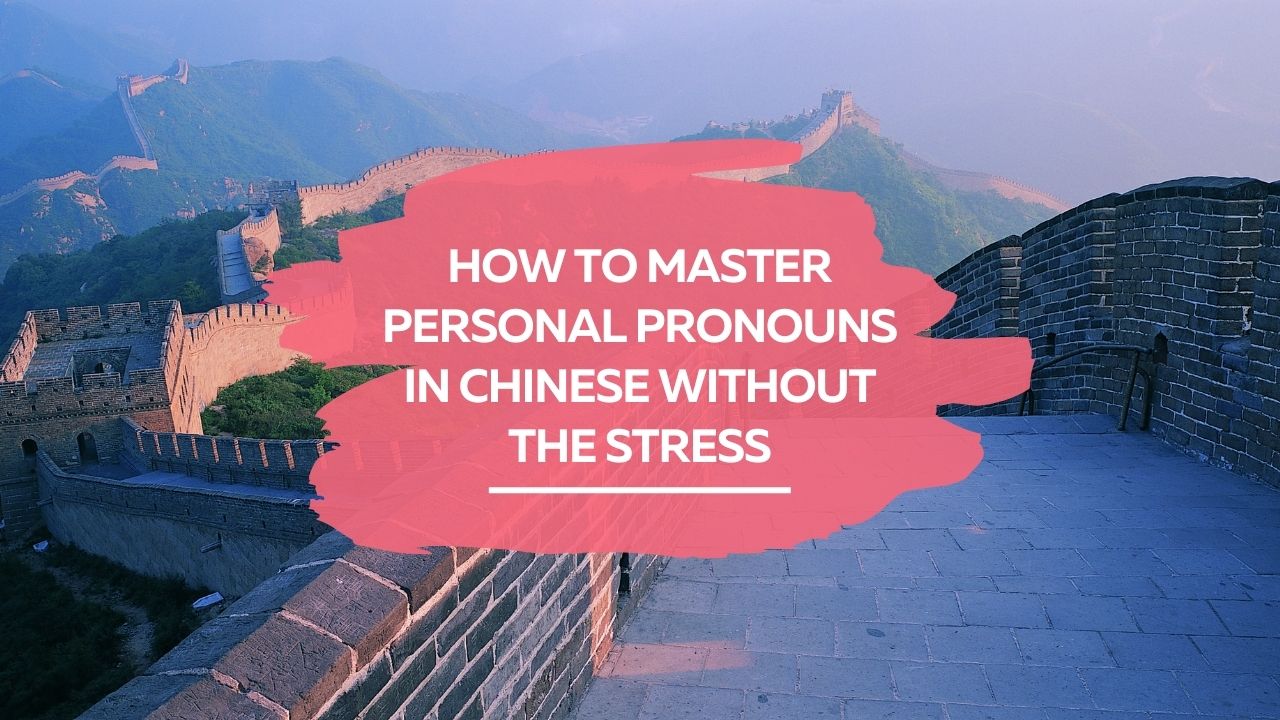 How To Master Personal Pronouns In Chinese Without The Stress

When learning Chinese, you’ll undoubtedly come across some aspects that you find challenging – after all, this is a language with a reputation for being among the very hardest for speakers of English to learn.

However, at the same time, some other areas of Chinese are extremely easy to master, and often, you are likely to find yourself pleasantly surprised about how simple the language is.

Chinese personal pronouns fall very much into the latter category, but it’s still something you need to cover early on. So to help you get started, here’s my guide to everything you need to know about this topic.

With Chinese Uncovered you’ll use my unique StoryLearning® method to learn Chinese through story… not rules. It’s as fun as it is effective. If you’re ready to get started, click here for a 7-day FREE trial.

Compare these two sentences in English:

The second version seems much more natural than the first because it uses words like “he”, “she” and “it” to avoid repeating “John”, “Sarah” and “ice cream” lots of times.

These words are what we personal pronouns, and we use them like this to avoid unnecessary repetition.

Now look at the words used to replace “John”, and you’ll notice there are two: “he” and “him”.

However, in Chinese, personal pronouns are much easier than in English because they don’t change depending on whether they are the subject or object of the sentence – Chinese subject and object pronouns are always the same.

On the other hand, Chinese has a couple of extra personal pronouns compared to English, so let’s start by introducing them all.

Here are the personal pronouns in Chinese:

So now we need to go through this list and look at how they are all used.

The first person singular, 我 wŏ, is easy because it works the same as in English:

Next, we have 你 nĭ and 您 nín, and these are also easy to understand. They both function as subject and object pronouns, but the second one is a more polite form.

If you are talking to your boss, you might use 您 nín, depending on your company, but 你 nĭ is also common – though you should probably use 您 nín with your company CEO.

In hotels or restaurants, the staff might use 您 nín when they speak to you or they might use 你 nĭ – perhaps you’re more likely to hear the polite version in more upmarket establishments.

However, if you are just talking to a stranger in the street – and for most other everyday purposes like buying something in a shop – you can just use 你 nĭ because 您 nín would seem excessively formal.

In Chinese, there are three versions of the third person singular pronoun, but as you can see, they are all pronounced the same – tā.

This means when you are speaking, you don’t need to think about which one to use, and the meaning is usually obvious from the context.

The only time you need to pay attention is when you are writing because each one has a different character.

So what’s the difference? It’s very easy because it’s almost the same as in English. 他 is used for male humans, 她 is used for female humans and 它 is used for animals (and sometimes objects, but we’ll come to that in a moment).

Generally speaking, when you are talking about inanimate objects, you usually don’t use a pronoun at all.

(literally, “Computer not can use. Broken.”)

However, 它 tā can be used for inanimate objects on the rare occasions when the meaning of the sentence would be ambiguous without it.

(See the sections below for more about the omission of personal pronouns and how possessives work in Chinese.)

In Chinese, the only personal pronoun that is even slightly tricky is the first person plural. And even this is very easy – it’s just a bit different from English.

The basic pronoun you use for “we” or “us” is 我们 wŏmen, and this can be used in all situations, just like in English.

However, in the second example, you can use 咱们 zánmen because when you say “let’s go”, you are including the person you are talking to.

At the same time, you could also use 我们 wŏmen, as in the third example, to include the person you are talking to because it’s obvious from the context.

咱们 zánmen is common in the north of China but you won’t hear it in the south. However, even in the north, it’s optional, so you don’t need to use it yourself – but you’ll still need to understand the meaning because you will certainly hear people using it.

And a note on pronunciation – in pinyin, 咱们 is written zánmen, but the ‘n’ is practically silent, a bit like the ‘n’ in 什么 shénme (what).

The second person plural pronoun in Chinese is 你们 nĭmen, and it’s used when addressing more than one person.

There’s nothing complicated about this, but since standard English doesn’t have a separate pronoun for the second person plural, you just need to remember to use it instead of 你 nĭ when talking to two or more people.

(American English sometimes uses “y’all” for second person plurals, and thinking of this might help understand how it works in Chinese.)

An important point to note, however, is that there is no plural equivalent of the polite 您 nín form. If you need a polite way to address more than one person, you can use a sentence like this:

位 wèi is a polite measure word for “person” or “people”, and using it like this makes the sentence sound more respectful.

As with the singular, there are three possible forms for the third person plural, and just like the singular equivalent, the only difference is the way they are written – all three versions are pronounced tāmen.

The same rules apply here too: 他们 is used for male humans, 她们 for female humans and 它们 for animals (and occasionally, for things).

We saw above that if you are talking about an inanimate object, you usually omit the pronoun 它 tā – but other pronouns are commonly omitted too.

In Chinese, if it’s obvious who or what you’re talking about, it’s normal to leave the pronoun out.

Look at this pair of examples:

In the first version, the pronouns 你 nĭ and 我 wŏ are used. However, from the context, it is obvious what both speakers are talking about, so the pronouns can be dropped.

There’s no hard and fast rule about this, but it’s extremely common – and especially in B’s answer, it sounds a bit unnatural to use 我 wŏ when the meaning is already so clear.

Incidentally, if you speak to Chinese people who are learning English, you may notice that many often drop pronouns like this in English too – and now you know why!

There’s another type of pronoun that we need to mention, and that’s possessive pronouns, words like “mine”, “yours” etc.

In Chinese this is also extremely easy because you just use the same pronouns we’ve already seen with 的 de tacked on the end, like this:

Closely related to this are words like “my”, “your” etc. in English. Technically, these are possessive adjectives rather than pronouns, but they work in the same way.

To say that something belongs to somebody, you just use a personal pronoun with 的 de on the end, like this:

When there is a close connection between the owner and the thing being owned, 的 de can be dropped. In practice, this means you don’t usually use it with family members, like this:

At other times, it is optional:

Also, it is best to avoid repeating 的 de too many times in the same sentence, so you can leave it out, like this:

The second version is also correct, but it sounds too ‘clunky’.

As we have seen, there is nothing difficult about Chinese personal pronouns apart from perhaps the fact that Chinese has a few more of them than English.

In Chinese, you don’t need to worry about choosing between subject and object pronouns, and very often you can leave them out altogether.

As ever, the best way to master them is to practise as much as you can – and this way, in only a short time, you’ll find yourself using the whole range of Chinese personal pronouns with confidence.

The good news is that as you read in Chinese or watch Chinese shows on Netflix you'll come across pronouns frequently. So you'll get comfortable with how to use them fast.