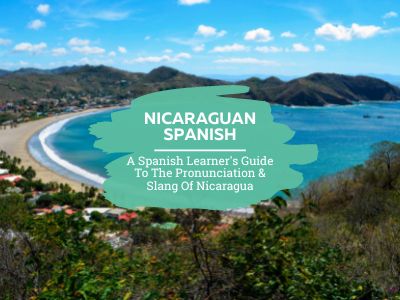 As a Spanish learner, you know it's a fascinating language. Sometimes it seems like its diversity is inexhaustible: every country has its own dialect, and every region has its own variation. And that’s not a bad thing, of course. On the contrary: it’s an opportunity.

Nicaraguan Spanish is one of the many dialects spoken all over the world. It’s similar to other variations spoken in Central America, like Costa Rican Spanish. But of course, it has its own particularities, influenced by Nicaraguan culture and history.

Believe me, it’s a whole experience!  And you can now have a taste of that because in this article you're going to dive into Nicaraguan Spanish: its pronunciation, grammar, and slang. Let’s go!

The official Nicaraguan language is, of course, Spanish, spoken by more than 90% of the population. However, that’s not the only language you can find in Nicaragua; there are at least two other significant groups.

Firstly there's Miskito, an indigenous language spoken mainly in the North-Atlantic region of the country and in neighbouring Honduras. In total, Miskito has up to 700.000 speakers, a significant number if you take into account that Nicaragua as a whole only has a population of seven million.

Secondly there's English creole, spoken mostly in the South-Atlantic region of Nicaragua. It’s similar to Jamaican English — both speaking communities are descendants of African slaves brought to America by the British. And, even though it’s not as popular as Miskito, no one can deny it has its own weight.

The Atlantic Region Of Nicaragua

If you’re reading closely, you may have noticed that both these languages are spoken in the Atlantic region of Nicaragua. And you may even wonder, is that a coincidence?

Well, let me tell you: it’s not. In fact, the Atlantic region of Nicaragua has had a very different history than the Pacific one.

While the Pacific was mostly governed by Spain since the 16th century — that is, until Nicaraguan independence —, things have been different on the other side.

The Atlantic coast was, for a long time, a hotly disputed territory:

You get the idea!

All that contributed to maintaining the Miskito as an indigenous language. And to establishing English in certain communities.

Truly fascinating, am I right? Or maybe it’s just that I’m a history nerd, I don’t know. In any case, all these different cultures have also left a trace in Nicaraguan Spanish, making it a very diverse and unique dialect. So let’s find out how!

The most noticeable trait of Nicaraguan pronunciation is the way they say the -s.

Like in many other Latin American countries — like Ecuador, for example, or Argentina —, Nicaraguans aspirate the -s when it’s situated before another consonant, which results in a sound similar to the English -h.

That means that a word like pesca (fishing) will sound something like *pehca. It’s also very common for people to aspirate the -s at the end of the words, making casas (houses) a lot like *casah.

Don't panic, the grammar section isn't particularly complicated, the grammar villain is just making you worry for no reason.

The most important that you need to know about are second-person pronouns in Nicaraguan. In Spanish, you have several possibilities in this aspect. You may have studied the use of usted, for example, or the difference between vosotros and ustedes.

Here’s a small table where you can see all the different second-person pronouns Spanish dialects can use:

There are different possible combinations among these pronouns. Peninsular Spanish uses the tú – vosotros combination. But Mexican Spanish, favours the tú – ustedes pair.

So, what’s the case with Nicaragua? In Nicaraguan Spanish we find the vos – ustedes combination, the same we can also find in countries like Costa Rica, Paraguay, Argentina or Uruguay.

This pronoun selection affects Spanish verb conjugation, which looks like this:

Nicaraguans like to play with words. Their slang is full of abbreviations, jokes, and funny derivations, which makes it amusing, but also challenging. Have you ever heard two Nicaraguans speak full-speed to each other? That’s a real show.

Nicaraguan slang is so rich that we can’t list each and every expression — you’ll need a full book for that, not an article. But we can take a quick tour around some of the most popular ones. Are you ready? Let’s go!

Every Nicaraguan knows the meaning of the word nica, because… well, because that’s how they call themselves! Nica is short for nicaragüense.

¡Chocho! is an interjection used to indicate surprise, astonishment… or almost anything, in fact. In reality, it’s mostly a way of expressing emphasis.

Nicaraguans use it so much that people from neighbouring countries, like Costa Rica, usually refer to them as chochos — although not always in a nice way.

Me fue mal en el examen, estoy arrecho (I did bad on the test, I’m angry). In standard Spanish, you’ll translate “angry” as enojado — but not in Nicaraguan. Here, people usually use the word arrecho, which of course has its associated verb, arrecharse (to get angry)

Even though the spelling of this word may vary, the meaning stays the same: “very good”. In a sentence, it looks like this: Esta fiesta está diacachimba (This party is really good).

In Spanish, a calambre is a cramp. So, quite logically, acalambrado should mean something like “a person who has a cramp”, right? Well, yes and no.

Jorge, ¿me pasás el chunche, por favor? means something like “Jorge, would you pass me the thing, please?”.

Because a chunche can be almost everything. It’s really a handy word, one that can replace almost every object. And a chunchada? Well, that’s just more of the same, just another way of saying chunche.

The pinol or pinole is a very traditional Central American food. Dating to pre-Hispanic times, it’s basically a flour made from toasted corn, which sometimes includes sugar or some kind of spice, like cinnamon.

The pinole —a word that comes from the Nahuatl pinolli— is used to make sweets and desserts, and it’s also a drink, made by adding water and spices to the powder. The pinolillo is a particular Nicaraguan spin to this drink that includes cocoa.

It’s so popular that the main verse of “Nicaragua mía”, something like the non-official national anthem, says Soy puro pinolero / Nicaragüense por gracia de Dios (I’m a pure pinolero / Nicaraguan thanks to God), using pinolero (someone that drinks pinol or pinolillo) as a synonym for Nicaraguan.

Do you wanna take the bus? But we’re only a few blocks away! We better go a pincel (by foot). This expression is quite curious because, in standard Spanish, pincel means “brush”.

Queque comes from the English “cake”, and it means… well, exactly that!

The expression ¿Kiubole? — sometimes spelled as ¿Quiubole? — is a derivation from ¿Qué hubo? It’s a very common phrase, something like the Nicaraguan equivalent to the English “What’s up?”.

Nicaraguan Spanish 101: The End Or Just The Beginning?

You've made it to the end of this crash course on Nicaraguan Spanish. It’s quite something, isn’t it? I hope you find it useful.

Needless to say, Nicaraguan Spanish is just one among many Spanish dialects and variations, each of them with its own special flavour.

Wanna learn more? Well, you’re in luck! You can deepen your knowledge of Spanish with StoryLearning®, a special language learning method that uses stories, not rules. Believe me, it’s just as fun as it sounds! See you soon.