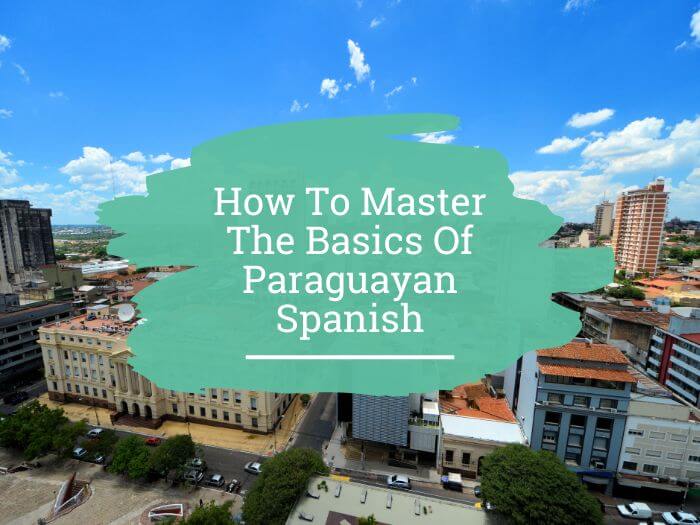 How To Master The Basics Of Paraguayan Spanish

Spanish is one of the most diverse languages in the world – maybe that's why you're learning Spanish. Spread around three continents —Europe, Africa, and America—, the margin for variation is huge.

Take, for example, Paraguayan Spanish. Have you ever heard a Paraguayan speak? It’s a unique experience!

Paraguayan people have their own pronunciation and vocabulary, as their variety is heavily influenced by Guarani, an indigenous language spoken by almost 80% of the population.

This is a fascinating case of widespread bilingualism, one that produces its fair share of idioms and other linguistic curiosities.

You may be planning a short trip to Asuncion —Paraguay is one of the fastest-growing tourist destinations in the world!—, or you may just be curious about this unique Spanish dialect.

Maybe you just want to know more about Spanish in general, because you’re thinking about studying a new language. Either way, you came to the right place!

Here you're going to discover the basics of Paraguayan Spanish. Enjoy!

Spanish is Paraguay’s official language, but it’s not the only one. Guarani, the most popular indigenous language in the country, has been an official language since 1992 as well. That’s interesting, isn’t it?

This is an almost unique case of widespread bilingualism. What makes it interesting is that in Paraguay you have two extremely different languages that coexist across more than half of the population.

Bilingualism In Europe Vs Paraguay

If you think about it, bilingualism isn't that strange. It's in fact very common in small countries or in border areas.

In Europe, there are a lot of countries where people speak or understand two or three languages. Almost all Swiss people, for example, are bilingual (they speak German and French, mostly), and many of them are trilingual.

Something similar happens in Belgium, where a lot of people speak both Dutch and French. But Dutch, German, French etc are all are very closely related. They're all Indo-european languages, a group that includes German, Latin, Greek, Sanskrit, and all their descendants.

As you can imagine, Guarani, being an indigenous language, doesn’t belong to this family (in fact, it belongs to the Tupi group, like a lot of other South American languages).

So, in Paraguay, you have two very different languages working very closely. This in itself is not that weird in Latin America —in Bolivia and Perú, for example, you can also find lots of people who speak indigenous languages.

What makes Paraguay different is that almost everyone speaks the same language, Guarani. That’s not the case in Bolivia, where you can find up to… thirty-seven official languages!

This situation —the coexistence of two languages of two very different families in almost all the population— makes Paraguayan Spanish almost unique. So, how special is it? Let’s find out!

When speaking about Paraguayan languages, you have to distinguish Paraguayan Spanish, Paraguayan Guarani and Jopara (pronounced yopará). These three languages influence each other, and a lot of people will use one or another depending on the context.

Paraguayan Spanish is the variety of Spanish used in Paraguay. As we’ve seen, it’s heavily influenced by Guarani, which leaves a trace in its vocabulary.

It’s, in a way, very similar to Rioplatense Spanish; even though the pronunciation may be different, they both have voseo, which means that they use vos instead of tú as a second person pronoun. They also use ustedes instead of vosotros in the second person plural.

This means that their conjugation table looks like this:

Paraguayan Spanish is the most formal and standard language in the country; you’ll see it in Paraguayan media and businesses, for example.

It’s the variety spoken by almost all the population, which includes a large segment of monolingual Spanish speakers, located mostly in urban areas.

Paraguayan Guaraní is the official variety of Guaraní used in Paraguay. It’s regulated by the Academia de la Lengua Guaraní, and it’s different, for example, from the Guaraní spoken in Argentina.

It’s heavily influenced by Spanish, which means that it’s also different from Guarani-eté, the variation of Guarani used by monolingual Guarani speakers, a decreasing but still significant segment of the population located usually in rural areas.

Jopara is a variety of Spanish, but one that’s so influenced by Guarani that you can’t understand it if you don’t know both languages.

This may sound strange, but the thing is that we’re talking not only about vocabulary, but about a whole different array of grammar words and functions. Unique, isn’t it? And not so easy to understand.

I think it’ll be clearer in a sentence:

You can see the difference in the word jasuolucionata. This is actually a variation of the verb solucionar —the same used in the Paraguayan Spanish version—, but with two Guarani particles: ja (which means “we”) and ta (which means “in the future”).

Guarani is, like Japanese or Turkish, an agglutinating language. This does not mean in any way that these languages are related to one another, but rather that their grammar works in a similar way.

Agglutinating languages have a great facility for mixing small particles, each with their own meaning, to create new words. These Guarani particles are frequently used in Jopara.

Although it's used by a very large segment of the population, Jopara is perceived as informal. Many people speak it only with their family and friends, and hardly ever use it in writing.

Anyway, if you’re hungry for some more Paraguayan facts, I have one for you: the word jopará means “mixture”, and it’s also the name of a delicious stew.

Paraguayan Spanish has a lot of colourful words and sayings. Many of them come from Guaraní; even though in this case its influence is limited, there are a few words, particles and expressions used even by monolingual Spanish speakers.

The most popular are:

Na is a Guarani particle that means “please”. Paraguayans usually put it after the verb, like this: Vamosna (Let’s go, please).

All these particles have an interrogative meaning in Guarani; in other words, you use them to ask questions.

In Spanish, they’re usually put at the end of interrogative sentences as a reinforcement. This means that ¿Por qué? (Why?) can also be ¿Por qué pió?

This word is difficult to translate, but it generally means an emphatic “no”. Its etymology is not clear, but Paraguayans use it like English speakers say “No way!” or “In your dreams”.

Like ¡Mbore!, ¡Kore! is used mostly as an exclamation or an interjection. It basically means “Oh no!”, and it’s used to indicate surprise or disgust.

Gua’u means “false”, and people usually use it to say they were kidding. Era de gua’u means “It was a lie” or “It was a joke”, depending on the context.

In most Spanish dialects, luego means “later”. So why do Paraguayans say things like Te dije luego? That literally means “I told you later”.

The thing is, in Paraguayan Spanish, luego has no temporal meaning. It works more as a way to emphasize the verb, and Paraguayan people use it all the time.

Angiru is the Guarani word for “friend”, but in Paraguay it's so popular that even monolingual Spanish speakers use it.

This word means “party”, and is generally an invitation for drinking. A Paraguayan could say ¡Viernes de ja’umina!, which would be translated as “This Friday is for drinking!”.

Ñembotavy is not a single word, but a whole phrase. It means “to play dumb”, and is very common in Paraguay.

This is a very common Paraguayan phrase. It means “He/She does everything that he/she wants, with no respect for anything”.

The Basics Of Paraguayan Spanish

Paraguayan Spanish is a whole world, isn’t it? The relationship with Guarani makes it very rich and complex, a Spanish variety like no other.

If it seemed a little difficult for you, don’t worry: even native Spanish speakers have problems with it sometimes. Which makes sense, after all. If you’re not familiar with Guarani, Paraguayan Spanish can be very challenging.

That said, if we’re talking about Spanish varieties around the world, that degree of confusion is more the exception than the rule.

Most countries or regions add spice the language in their own way: Puerto-Rican Spanish is not the same as Chilean Spanish, for example. This doesn’t mean that Spanish speakers around the world don’t understand each other; it just means that they may have some fun in the process.

Do you wanna dive into all this linguistic richness? Well, I have good news: you can learn Spanish with StoryLearning® . With StoryLearning, you learn by reading in Spanish, not learning grammar rules. Sounds fun, doesn’t it? See you soon!