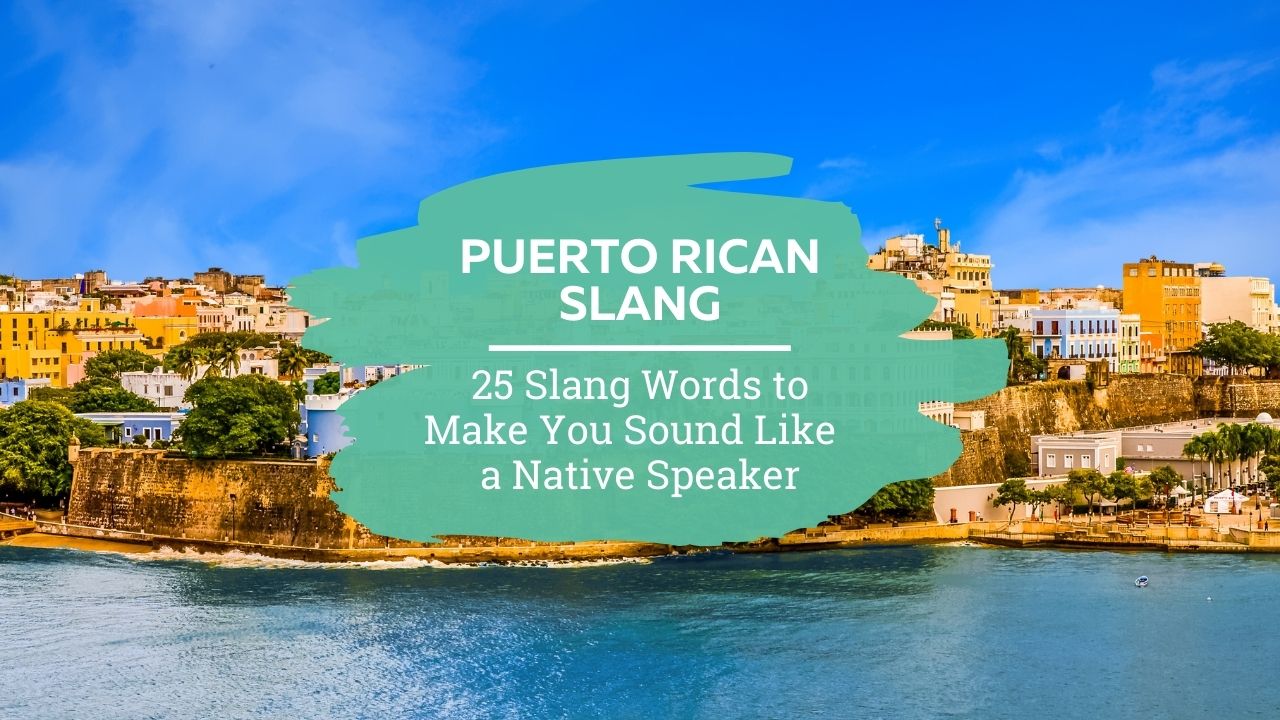 If you love learning Spanish to use it in real life, then you have to know your Puerto Rican slang!

Learning local jargon is actually a great way to learn more about local culture. Communities express themselves through language, and, as each community is different, you’ll find very diverse, lively slang all around the world.

And Puerto Rico is no exception! Even among the Spanish-speaking community, Puerto Rican slang is recognized as one of the most colourful of them all.

This little island has a very characteristic way of speaking, heavily influenced by American English. It’s no surprise; after all, it is technically part of the United States.

And this is also why many English speakers are curious about this variety, not to mention that some of the world’s most famous musicians come from this country and incorporate their slang into their songs.

In this article, I’ll share with you 25 Puerto Rican slang words and phrases for you to learn and use. Enjoy!

Boricua means “Puerto Rican,” puertorriqueño. If you’re planning a trip to Puerto Rico, prepare yourself for hearing this word everywhere!

It comes from Borikén, the way native taínos called the island. Puerto Ricans are very proud of their boricua identity, as you can hear in this classic song by Bobby Valentin:

¡Bendito! is a very common exclamation. You may also hear ¡Ay, bendito! or even ¡Dito! They all mean the same, “Blessed!”, and it’s used quite similarly to English “Oh my god!”

You may have heard how Mexicans use chavo. For them, it refers to a boy or a young man. But in Puerto Rico, chavo means “money.” Don’t mix them up!

Al garete is a nautical term, similar to “adrift.” When a ship goes adrift, it’s out of control, and it’s moved only by the elements. In Puerto Rico, you can say La fiesta se fue al garete, and that’ll mean that the party was a disaster.

Many Puerto Rican slang words come from English. Broki is one of them; it comes from “brother,” and used in its broader sense: it can mean both a sibling or a close friend.

Gufear is another word closely associated with English. It comes from “goofy,” and can be translated as “to act goofy” or “to have fun.”

The meaning of bregar is very similar to the English “to deal with”. Used in a sentence, it’ll look something like this: Ella está bregando con algo del trabajo (She is dealing with something from work.)

Many Puerto Rican slang words are shortened versions of other words. That’s the case of mano or mana, short for hermano and hermana, which mean brother and sister.

A jartera is, basically, a big meal. The word comes from harto, which generally means “tired”, but sometimes it’s used as “satisfied” or “satiated.” If you say ¡Qué jartera!, that means that you’re extremely full. Good for you!

You’ve probably heard the English expression “big shot”: a person with a lot of money, power, or influence. Well, Puerto Ricans have adopted this word and made their own version.

They say bichote or bichota, and it's used in the exact same sense. There is even a famous reggaeton song called like this: “Bichota”, by Karol G.

Originally, a bembé was a religious celebration held by people of African heritage. With time, its meaning has broadened, and now it’s a synonym for fiesta (party).

Janguear—sometimes spelled as hanguear—is another case of Spanglish (as you can see, Puerto Rican slang is full of them!). This time, the English term is “to hang out,” and its meaning is mostly the same: to spend time with friends.

Quite logically, a jangueo is a place or a group where you usually hang out. And a reggaeton song too!

A jumeta is a borrachera, that is, being drunk. You can get a jumeta in a bembé!

Did you know that Puerto Rico, this small island in the Caribbean, is the tenth country with more cars per capita? Now you do!

This singularity is mostly due to their relation with the United States, one of the largest car manufacturers in the world.

Puerto Ricans import a lot of cars… and also car-related vocabulary. That’s why they say parquear—which means “to park”—when most Spanish-speakers say aparcar or estacionar.

Corillo probably comes from corro, an outdated word that meant “small group of people that talks.”

Puerto Ricans, like most Spanish-speakers from the Caribbean, have a special way of pronouncing the -r sound, so it’s likely that corro had evolved into coro and then corillo.

Nowadays, the word means something like “crew” or “gang.”

In most Spanish-speaking countries, bochinche means something like “turmoil.” “commotion,” or “riot.” It’s used when there is a lot of noise and a lot of people involved in a kind of confusing situation.

But guess what? Puerto Ricans don’t use it like that. In Puerto Rican slang, bochinche means “gossip.”

Puerto Rico is one of the few Spanish-speaking countries where baseball is actually popular. More so, it’s so popular that some baseball terms have evolved into fundamental Puerto Rican slang words.

The pitcher is the player that throws the ball, right? So pichear means, at first, “to throw.”

But the word has acquired a life of its own, and now it has a slightly different connotation. Today it means something closer to “to throw away”, and more precisely, “to forget about it” or “to ignore.”

Do you want to see this word in action? You can hear it in the first part of “Yo perreo sola”, by Bad Bunny.

Here's another example of English influence in Puerto Rican slang. Tripear comes from “to trip”, but its meaning is not exactly the same: ¡Me estás tripeando! means “You’re kidding me!”

If you’ve studied even a little Spanish, you’ll know what a gato is a cat. That’s easy, right?

But that’s the thing with slang: they frequently take common words and put a spin on them. Because in this case, a gato or a gata is not a feline. Instead, the word is used to indicate a nice-looking guy or girl.

The term pana is not exclusive to Puerto Rico. In fact, it’s used in almost all the Spanish-speaking Caribbean: you can hear it in Panama, Honduras, Venezuela, Dominican Republic, or even Colombia.

In all of these countries, it means the same: “partner”, “mate”.

Mamey is a fruit, very common in the Caribbean; in other countries, it is called zapote. Puerto Ricans use mamey in a very common expression, used to indicate that something is very easy: Esto es un mamey.

You can hear it in action in this part of the reggaeton classic “Atrévete”, by Calle 13.

Do you wanna know something curious? In South America, you can find the same expression… but with a potato. Esto es una papa, they say.

The meaning is exactly the same—“This is easy”—, but they’ve changed mamey to papa. Which makes sense, considering that there are no mameys in South America, and that that’s where potatoes are originally from.

Do you remember when we talked about Puerto Ricans and cars? This small island has one of the largest populations of cars—proportionally speaking—in the world.

So you can expect a lot of traffic jams, right? Well, Puerto Ricans have their own word for them: tapón.

Nebuloso is, first and foremost, a climate condition. It means “nebulous” or “foggy.”

But in Puerto Rico, this word is also used in a less literal sense. Like the English “shady”—that can mean both a dark place or a situation of doubtful honesty—, nebuloso is also used when speaking about a suspicious thing.

Like mano, chacho is the short version of a longer word. In this case, it comes from muchacho or muchacha, which mean “young boy” or “young girl,” respectively.

A revolú is a mess, a chaotic situation, a turmoil. If a lot of people are making a lot of noise, that’s a revolú, for sure!

Spanish slang is very different among countries. That’s understandable, considering that Spanish is one of the most widespread languages in the world—20 countries from all over the globe speak it, and speakers add up to almost 600 million.

Even though slang can be incredibly diverse, the basic structure of the language remains the same. Spanish speakers all over the world understand themselves with little to no problem—and you can be one of them!

We have Spanish courses for all levels, where you’ll learn all about the different variants of Spanish and their slang, Puerto Rican among them. But let’s get to it!

Now that you “know” these Puerto Rican slang words, the tricky part is remembering them and using them to impress your Puerto Rican friends when chatting to them.

If you think that the best way to learn is to memorise word lists, it's not surprising. That's exactly the method you learned at school – hasn't really worked has it?

But there is a way to improve your Spanish and learn slang without rote learning. It's the StoryLearning® method, a teaching philosophy that understands that memorising is not the easiest—or most entertaining—way of learning a language.

Instead, we use one of mankind’s oldest tools: storytelling. Learn all about that here!