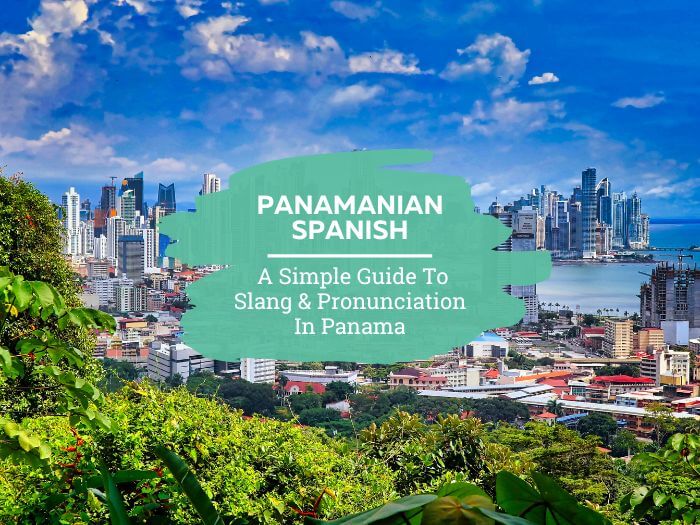 Panamanian Spanish: A Simple Guide To Slang & Pronunciation In Panama

Hey Spanish learner – welcome to Panama: one of the most prosperous countries in Latin America.

Its strategic geographical position in the centre of the continent makes this country a meeting point for cultures from all over the world.

This, of course, has a big influence on their culture, including language. In this article, you'll discover everything you need to know about Panamanian Spanish to sound like a local, from its pronunciation to slang, and also some idiomatic curiosities. ¿Listos?

Characteristics Of The Panamanian Spanish Accent

As with each variety of Spanish, in Panama there are a series of distinctive linguistic features. Let’s see what they are:

English In The Spanish Of Panama

What comes to mind when you think of Panama? Your first thought is probably the Panama Canal.

Indeed, this is one of the greatest achievements of modern engineering, and its administration was in the hands of the United States for almost a century. Such a long time, of course, made Panamanians absorb a lot of vocabulary in English!

But there's more: for centuries, Panama has welcomed immigrants from other Caribbean countries where English is the main language, such as Jamaica or Barbados. In fact, many people from the Antilles were the builders of the Panama Canal!

As you can imagine, all this left a very important mark on the Spanish of Panama, and that’s why this dialect has a large number of anglicisms. Below, you'll find a table with some of the most common ones.

Addition Of Pronouns In Panamanian Spanish

Now, we have to talk about another phenomenon that can be considered a loan from English (and this also happens in other Central American territories, such as Puerto Rico or the Dominican Republic).

It’s the addition of the pronoun in some sentences, even when, in Spanish, this is unnecessary. Let me explain that in a bit more detail.

Generally, verbs in Spanish contain enough information for us to deduce what the subject of the sentence is. But in English, you'd need to add the subject to that sentence.

In Panama, it's common to use the pronoun, like in English. This is much clearer in questions: a Panamanian would say ¿Qué tú quieres? (What do you want?) instead of ¿Qué quieres?, or ¿Qué tú haces? (What are you doing?) instead of ¿Qué haces?

Reversing The Order Of Syllables

This is really curious: in Panama, it’s not strange to find words in which the syllables are in reversed order. You can see this in two very common words in Panamanian Spanish slang: mopri and llesca.

Mopri means “friend”, or “guy”, and, if you think about it, it’s actually the word primo (cousin) with the order of the syllables reversed. Meanwhile, llesca comes from calles (streets). A Panamanian would say Vamos a la llesca con los mopris (Let’s go to the street with the guys).

Fun fact: in Argentina, there’s a whole vocabulary with this phenomenon, called vesre (which, again, is just the word revés, “reverse”, with the syllables reversed).

Voseo In The Panamanian Language

In the Panamanian language, the general way to address people is with tuteo; in other words, tú is used as the second person singular pronoun. However, there is a region where you address people with voseo: the Azuero Peninsula.

But what does voseo consist of? The most obvious difference with tuteo is that the pronoun used is vos instead of tú. However, it's not the only difference: there is also a different conjugation of verbs, especially those in the present.

Meeting local people is always a good idea—that's the best way to really get to know a culture! And, if you do it in Panama, you're bound to hear a lot of slang. Don’t be caught by surprise!

Here are a few typical words in Panamanian Spanish that you can hear in a casual conversation with people in Panama.

Chuzo is an expression that's normally used to express surprise, annoyance, amazement, or even admiration, almost like a “Wow!”. For example, a Panamanian would say: ¡Chuzo, mira cómo llueve! (Wow, look at that rain!).

Here we have another example of the influence of English on the Spanish of Panama. Chaniao comes from the English “shining”, and it’s a word normally used when someone is very well dressed: ¡Chuza, qué chaniao! (Wow, you look very well dressed!).

Yes, a chivo is a goat, so it’s normal for you to think that a chiva is a female goat. But, in this case, a chiva is a small bus. This word is shared with the Caribbean regions of Colombia and Venezuela.

People in Panama use guabanazo as a way to describe a particularly strong blow. There's an equivalent of this word in slang from other countries: in Mexico it’s a madrazo, in Spain it’s a golpazo, and in Argentina it’s a porrazo.

Surely you've noticed that all the variants use the suffix -azo which conveys a larger size on what is said.

Guari-guari is a dialect word used in the Panamanian province of Bocas del Toro, and is actually a mixture of indigenous languages, Spanish, French, and English.

However, it’s also used among Panamanians from other regions as a synonym for an unintelligible language: Eso es guari-guari para mí could be a good equivalent for the idiom “it's all Greek to me!”.

Do You Want To Listen To Stories In Spanish?

With a big influence of English (but also of African and indigenous languages), Panama has a very interesting language culture. And we hope this article has helped you to get closer to it!

However, we also believe that there is nothing more effective in learning a language than reading and listening to it in its natural habitat: conversations!

For this reason, we want to invite you to discover our StoryLearning® method, where you can learn Panamanian Spanish and the dialects of other Spanish-speaking countries through a teaching method focused on reading exciting stories. ¡Nos vemos allí!