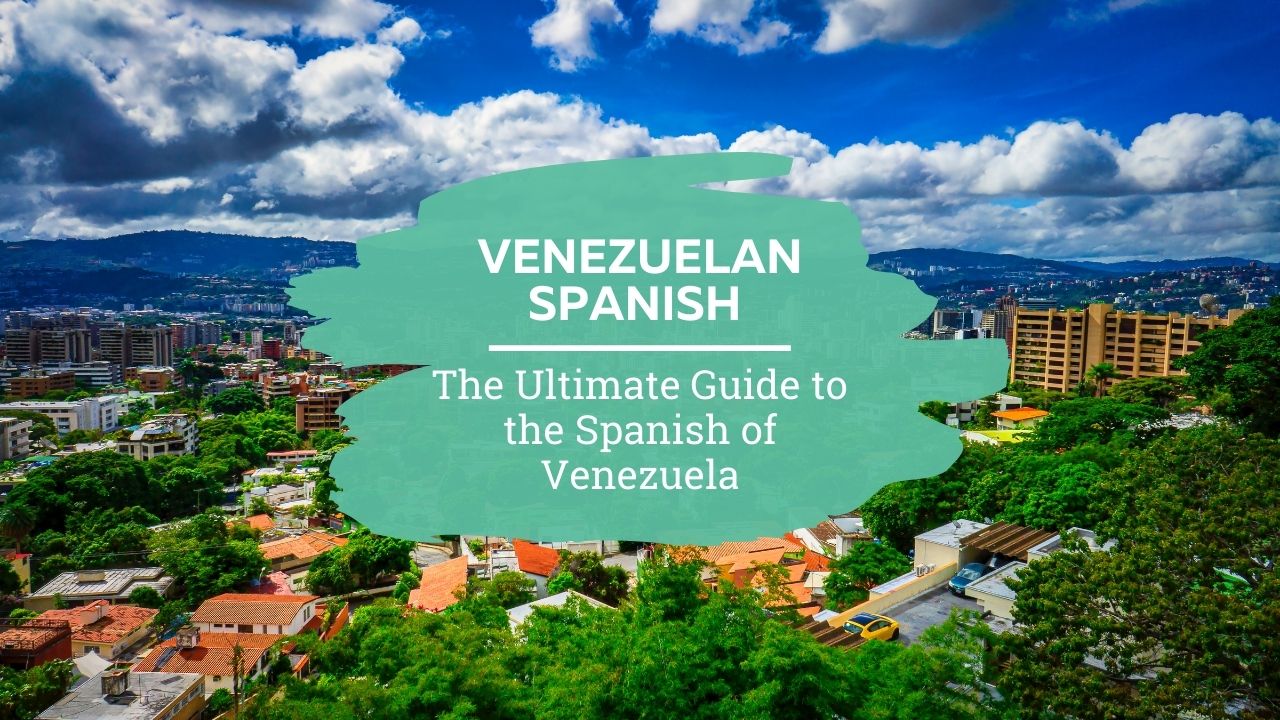 The Ultimate Guide To Venezuelan Spanish

Yes, we can think of lots of reasons to go to Venezuela, a beautiful country located in the extreme north of South America. But…do you know what kind of Spanish they speak over there?

In this article, you'll learn everything you need to know about Venezuelan Spanish. So, when you go sunbathing on Isla Margarita or go for a walk around the amazing Angel Falls, you’ll know the slang to use. Are you ready? ¡Empecemos!

The Spanish spoken in Venezuela is a variety of Caribbean Spanish; that is, the dialect spoken in Caribbean countries, such as Cuba, Puerto Rico, or the Dominican Republic.

However —like every Spanish-speaking country— Venezuelan Spanish has its own peculiarities. And, in fact, there are several Venezuelan accents along this South American country.

Central Venezuelan or Caracas Spanish is the one spoken in Caracas, Venezuela’s capital. Caracas’ population is about 2 million inhabitants: it’s the largest and most influential city in cultural, economic, and social terms.

Because of this, most of the national media are based here, which means that the variety of Spanish used in Caracas inevitably influences the variants used in other regions.

Central Venezuelan Spanish is characterised by the use of tú as the second person pronoun “you”.

Marabino Spanish is the one used in northwestern Venezuela and is spoken by about 5 million people. The main difference with the Spanish of Caracas is that in Marabino Spanish the voseo is predominant; that is, the use of the pronoun tú is replaced by the pronoun vos.

However, even within the region, there are some differences in the voseo used.

Is this all a bit hard? Don’t worry: here you have a table with the differences between these two types of voseo. Also, in the right column, you can see the same conjugation done with tuteo; that is, how would you say that same phrase in the Spanish of Caracas.

What’s interesting about this is that voseo reverencial was used in old Spanish; so the equivalent to English’s old “thou art” in Spanish would be “vos sois”. But these places where they use it today are not Medieval at all, they simply kept some old forms of our language!

If you thought that Central Venezuelan Spanish and Marabino Spanish were the only variants of that dialect, you were wrong!

In the area of the Andes mountain range —especially in those cities near the border with Colombia—, the pronoun used by people is neither tú nor vos, but usted. Keep in mind that, when using usted, the conjugation of the verb that accompanies the pronoun is modified.

Exactly: in the Andes area, you treat anyone as usted, no matter how confident you are. This is notable news since in the rest of the country (and in a lot of Spanish-speaking countries) the use of the pronoun usted is limited to formal treatment.

People in Venezuela speak Spanish, but every region has its own characteristics. Beyond this fact, we can define some dialectal features that are common to most of the territory:

Similarities With The Spanish Of The Canary Islands

This has an easy explanation: the Canary Islands and the Caribbean experienced a parallel colonization process.

Castilian Spanish arrived in these islands in the 15th century, and that is when the Canarian dialect began to form, strongly influenced by the accents of Andalusia and Extremadura, two other Spanish regions.

The Canary Islands, then, became an enclave that served as a bridge for expeditions to America. That is why many Caribbean accents have great similarities with the dialect spoken in those lands!

Although the Spanish language is shared by 21 countries, there are many exclusive words of the Venezuelan dialect. Next, we bring you a list of those words that you can commonly hear in a conversation in Venezuela.

Now, there’s a Venezuelan word that I think deserves a bit more explanation, since Venezuelans use it all the time: vaina. You can find this filler in every informal conversation, and it’s used to refer to objects or situations.

Now, let’s look at some typical phrases that you'll surely hear in a conversation in Venezuela.

A llorar pa’l valle (where pa’l is a contraction of para el, “for the”) literally means “Go cry to the valley”, and it’s an expression you would say to someone who did not follow your advice, or made a bad decision. It’s something like “I told you so!”.

Parar bolas (literally, “to stop balls”) is a synonym for “pay attention to me”. You can use it in several contexts:

Está peluo (where peluo is actually peludo, this is, “hairy”) is used to refer to a difficult situation. For example, el tráfico está peludo or el examen está peluo means “traffic is heavy” and “the exam is hard”, respectively.

Pendiente means “pending”, and Venezuelans use this word to make informal invitations: ¿Pendiente unas cervezas? is “Let’s have a beer”, or ¿Pendiente una peli? is something like: “You wanna go to the movies with me?”.

If you want to learn to speak Spanish as they do in Venezuela, you have to take into account two basic aspects: the aspiration of the “s” at the end of the words and the seseo.

Don't worry if this sounds confusing. After all, you can make yourself understood in Venezuela perfectly no matter what dialect of Spanish you are using.

And since the most important thing is that you enjoy the process of learning this beautiful language, use the StoryLearning® system, where you can improve your level of Spanish, learn vocabulary and, along the way, listen to incredible stories.