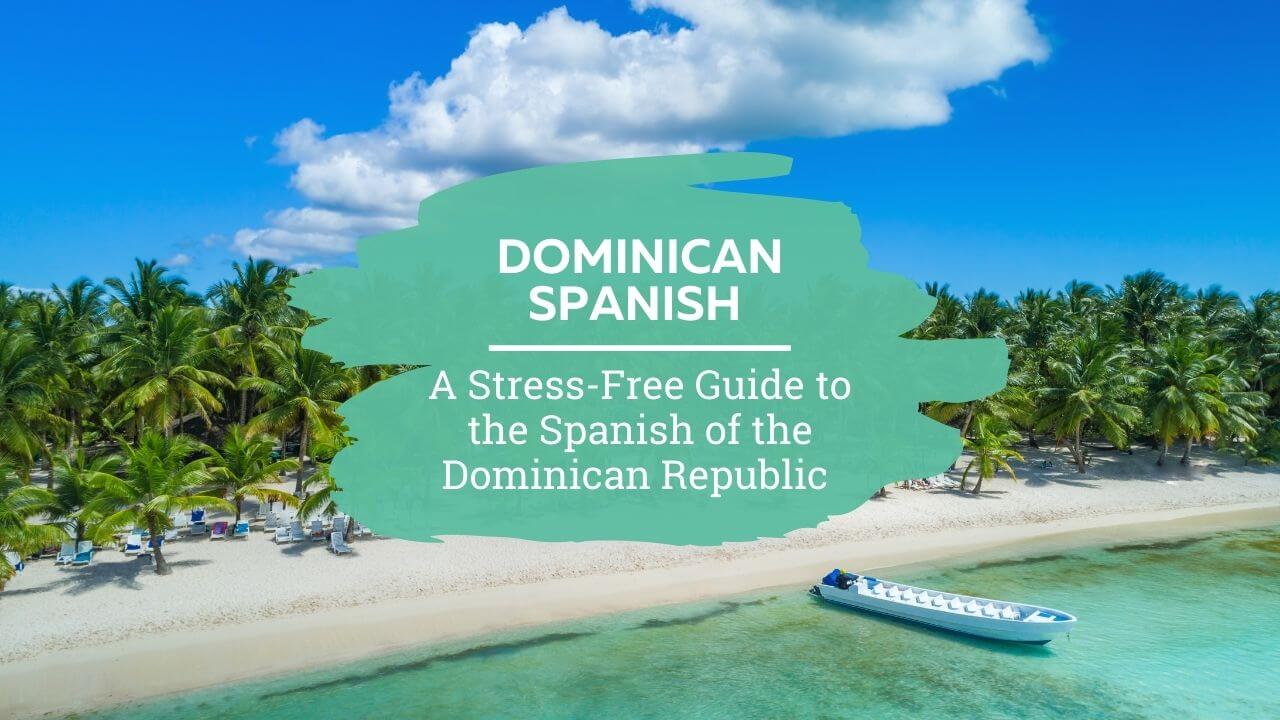 A Stress-Free Guide To Dominican Spanish

If you're learning Spanish, you've probably noticed that it seems to have infinite variations. Every region, every country, even every community puts its own twist on it, and the Dominican Republic is no exception. As you can imagine, their Spanish is quite unique!

An island in the middle of the Caribbean, this territory was influenced by a lot of different cultures, and they all left a mark in their language. That’s why Dominican Spanish is one of the most fascinating variations of Spanish!

And that’s why you’re curious about it, I presume. Or maybe you have Dominican origins. Or maybe you are simply planning to go on a trip to a resort in the Dominican Republic, and want to be able to understand the local slang and communicate a little better.

If you studied peninsular Spanish —the variation of Spanish spoken in Spain— or even Mexican Spanish, you will find that Dominican Spanish is quite different.

But don’t worry! It’s still the same language and once you learn the differences and get used to the accent, you won’t find it hard to understand. In this article you'll find the basics of Dominican slang that’ll help you sound like a native.

Historically, the Dominican language has been mainly influenced by three other cultures: the African, the taíno, and the American. That explains why this dialect is, in a way, very similar to Puerto-Rican Spanish.

Both of them are, like Cuban, Venezuelan or Panamanian Spanish, part of what’s known as Caribbean Spanish, but they’re also probably the two most affected by English.

Since the Spanish-American War at the end of the 19th century, the United States has had a very strong effect on Dominican politics and culture, subsequently invading the island two times.

That influence is also enhanced by the very large community of Dominicans living in the US, one of the most popular destinations of the Dominican Diaspora.

To top that off, more than half of the population is proficient in English, which ranks it at the top of Latin America. All that means that, in the Dominican Republic, Spanish and English are very close together, something that affects their vocabulary and grammar.

That said, the Dominican language has three distinctive traits:

As you may already know, Spanish variations are often differentiated by their second-person pronouns. In peninsular Spanish, you have tú and vosotros; in Rioplatense Spanish, you have vos and ustedes, and so on.

But in the Dominican Republic, you’ll find tú and ustedes. This affects, of course, the way they conjugate their verbs, so here you have a handy table:

As you can see, the only difference lies in the second-personal plural. A small tip: the conjugation for ustedes is always identical to the one for ellos or ellas.

Dominican pronunciation has a lot of the same traits as other variations of Caribbean Spanish. It has a very special sound to it! Even if you’re not a native Spanish speaker, you may be able to tell the differences between a Dominican and, let’s say, a Peruvian.

Probably the most notable trait of this dialect is a tendency to replace the -r sound with a -l or an -i, depending on the region. That means that a Dominican will not say perdón (forgiveness), but peldón or peidón.

This replacement only happens when the -r sound is at the end of a word or a syllable. You won’t hear something like calo instead of carro (car), but you’ll frequently find people saying correl or correi instead of correr (to run).

If you’ve studied some Spanish, you’ve probably already noticed that Spanish-speaking people tend to do something English speakers don’t: they elide the subject of the sentence.

You may find this idea a little bit too technical, but please, bear with me for a second. Let's take a look at an example:

What do we have here? Well, as you can see, the English sentence has three words: the subject, “I”; the verb “want”, and the object, “food”.

In Spanish, you can either have the subject Yo or not. That’s because Spanish verbs carry a lot of information solely in their conjugation, and that allows speakers to deduce the subject of the sentence.

However, Dominican Spanish, like Puerto-Rican Spanish, is different. It’s not clear if it's because of their relationship with English, or because of the influence of the Mande languages of West Africa, or a combination of both, but the case remains the same: Dominicans tend to over-emphasize the subject in relation to other Spanish speakers.

This is especially clear in questions. They almost always use the subject, placing it in a very English-looking position: just before the verb.

As you can see, Dominicans (and many other Caribbeans) tend to put the pronoun just before the verb, like English speakers. In contrast, most Spanish speakers put it after the verb or don’t use it at all.

Now that you’re well-versed in grammar, we can talk a little bit about the fun part: Dominican slang. These are some of the most common words and phrases used by Dominicans, but of course, they’re not all of them. Their language is very rich!

That said, if you want to polish your skills and go beyond knowing how to say “Dominican Republic” in Spanish (it’s República Dominicana, by the way), you’ve come to the right place!

What does vaina mean? Well, it’s a tricky question; you may be better off asking what it doesn’t mean. Vaina is a catch-all: everything can be a vaina, so the best translation should be “thing”.

You’ll hear Dominicans using it all the time; Pásame esa vaina (Give me that thing) is a good example of how it’s used.

A concho is a taxi. Well… kind of. It’s more like a bus. Or a combination of both, to be precise. In the Dominican Republic, you’ll find cars that take passengers on their prefixed routes; in a way, they work like very small buses where you can also negotiate the price.

This is a fundamental word for Dominican slang. Your pana is your friend, your buddy; it’s a very common word, and if you go to the Dominican Republic, you’ll hear it (and hopefully use it!) all the time. Fun fact: Venezuelans use it too, in exactly the same way.

Take shelter! A vaguada is coming! This word comes from the English bad weather, and it’s used to mean “storm”.

This word is quite simple: if you ate too much, you had an hartura. This is a derivation of the word harto, an adjective that means “very full”.

This word —a version of tigre (tiger)— usually refers to a hustler or a guy with street smarts, but it is not unusual to hear it when talking about any guy at all.

An esquimalito is a kind of popsicle that comes in a small plastic bag. It’s cold, colorful, and sweet, and it’s very common to find people selling it on the streets!

Do you want a taste of that delicious-looking plate? Well, you may want to ask for a chin, that is, “a little bit”.

Tato is a very common expression in the Dominican Republic. It’s believed to be a contraction, a short version of Está todo bien (It’s all good). So if someone asks if everything’s okay, you can respond by saying tato.

You may be able to deduce what a jeepeta is. Do you have your guess? It’s not a Jeep… well, not exactly. Jeepeta means, basically, any kind of SUV. This word comes from the Jeeps that American GI’s drove during their second occupation of the Dominican Republic.

Bacano is an adjective: if something is bacano, that means it’s cool or great.

This word sounds a little bit to what it means, because… well, a chimicuí is a short person. And we can all agree there’s something small in that sharp-sounding word full of -i’s, right?

Ticher is another anglicism. Contrary to what it seems, it doesn’t come from teacher, but from t-shirt. It’s used mainly for sports jerseys.

The meaning of guapo can be very confusing, even for native Spanish speakers. This is because, in most Spanish variations, guapo means “good looking”. As you can imagine, this is not the case in the Dominican Republic, where it means “furious” or “angry”.

Note: in most Spanish variations, you can say Él es guapo, using the verb ser, but Dominicans almost exclusively use the verb estar, as in Él está guapo.

This makes sense if you think about the change in meaning: being handsome can be a stable characteristic (although you can also look especially sharp on one specific day), while being angry is a state that can change rather quickly.

The Basics Of Dominican Spanish

How was that for an introduction? Did you like it? I hope so. Dominican Spanish is incredibly rich, so you can imagine that this only works as a start. A good one, though.

Do you want to know more? You’re in luck: you can learn Spanish with StoryLearning®. This is a special learning method that emphasises stories, so that you can learn using one of humanity’s oldest tools: narration.

That way, you can reduce the amount of boring grammar and speed up your learning curve… at the same time! So, if you’re wondering how to learn Dominican Spanish, well, you’ve come to the right place!

Your next step is to immerse yourself in books in Spanish. As 99% of Spanish is the same across the different varieties of Spanish, you can pick up the language naturally through reading no matter which version you're learning.