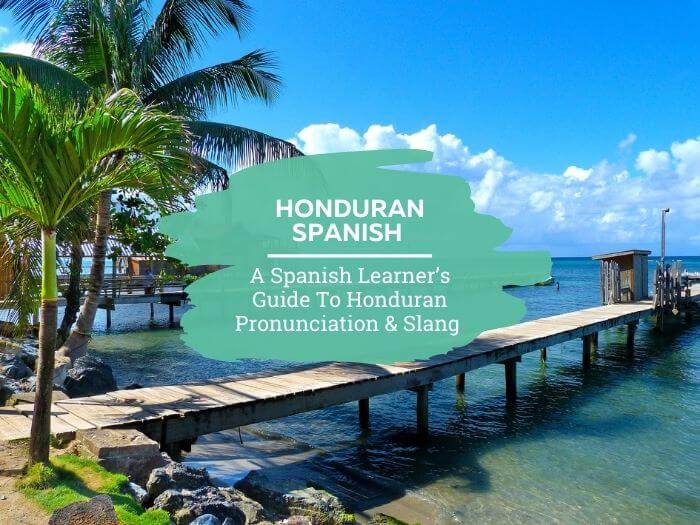 When you learn Spanish, you quickly realise that there are many different varieties throughout the world and Honduran Spanish is no exception. This dialect of Spanish is spoken in Central America, although it has a series of dialectal features that make it unique.

Some of these features include dropping the “s” sound in many words, and the use of vos instead of tú when saying “you”.

But this is only the beginning! Keep reading to find out everything about Honduran Spanish, from its pronunciation to its slang. ¡Comencemos!

Before discovering the phonetic and morphological characteristics of Honduran Spanish, let's talk a bit about the culture of this beautiful Central American country.

Honduras has about 10 million inhabitants, with 1 million living in Honduras’ capital, Tegucigalpa. 90% of the country’s population has Spanish as their first language, according to the latest study carried out by the prestigious Cervantes Institute, which is dedicated to promoting the Spanish language.

But wait! Spanish is Honduras’ official language, but that doesn’t mean that it's the only one. Along with it, native languages coexist, such as Chortí, Guarífuna, and Pesh.

What's more, the Mayan and Aztec peoples, who lived in the territory before the Spanish conquest, have left marks in the pronunciation and also in some terms of the current vocabulary.

This is super interesting, right? However, academics and language scholars agree on one thing —and it’s bad news: there are not too many studies on Honduran Spanish.

In fact, many scholars consider that Central America in general doesn't have a lot of research on its dialects. The good thing is that many academics and thesis students are trying to solve this. For example, in 2012 the Pluridimensional Linguistic Atlas of Honduras was published.

Let's kick off this guide to Honduran Spanish by taking a look at how it sounds.

Now that you know how to pronounce Honduran Spanish, it's time to take a look at some grammar and vocabulary differences.

I told you that we would go deeper into this point because it's super interesting!

Indeed, in Honduran Spanish, the elimination of the phoneme (or sound) “s” is really common, mainly in the southern part of the country, where the departments of Choluteca and Valle (you must visit the Honduran mountains of this region!) are located.

The reduction of the phoneme “s” has its origins in colonial times; that is when the territory was under the administration of the Spanish Crown.

However, this is not the only theory. Many Honduran people think it’s a linguistic heritage of the pirates of the area because the territory was the object of many incursions centuries ago. Arrrr!

The pronoun system used in Honduras is voseo, in other words, the use of the second person pronoun vos instead of tú.

This is very widespread throughout Central America, but also in countries in the south of the continent, such as Argentina, Paraguay, and Uruguay.

Now, how does voseo work? It’s quite simple: you just have to change the pronoun tú to the pronoun vos, and then make a slight modification to the conjugated verb.

Voseo in Honduras is used with relatives or people you trust, as is the case with tú in other countries.

However, something curious happens: although voseo is widespread among the population, advertising and commercial communication prefer to use the pronoun tú.

In Honduras, ustedeo; that is, the use of the pronoun usted, is also widespread among the population.

However, while in other Spanish-speaking countries this pronoun is reserved only for formal situations, in Honduras usted is used for both formal and informal situations, regardless of the age of the interlocutor or their level of authority.

In fact, many Honduran people reserve this pronoun for young children!

By now, after seeing all the characteristics of Honduran Spanish, you have realised that it shares many dialectal features with other countries, such as Costa Rica, Nicaragua, and Guatemala. Of course! Honduran Spanish has many similarities with these varieties.

In fact, a recent study found that Hondurans have a strong sense of identity with their neighbouring nations, recognising that they share phonetic, morphosyntactic, and lexical traits (fancy words for the sound, grammar and vocabulary systems of these dialects).

According to this research, Hondurans associate their way of speaking with that of El Salvador people in first place; Costa Ricans in second place; and Guatemalans and the Nicaraguas in third and fourth place.

As with all varieties of Spanish, Honduras has its own slang, with terms that you will only hear in this country.

Honduran Spanish is fascinating—as are all varieties of Spanish, actually.

I hope that you've learned a lot thanks to this post and that you can put the slang into practice with your Honduran friends.

As for the best way to learn Honduran Spanish, or any dialect of Spanish, I recommend reading stories in Spanish, which is the backbone of my fun and effective StoryLearning® method.