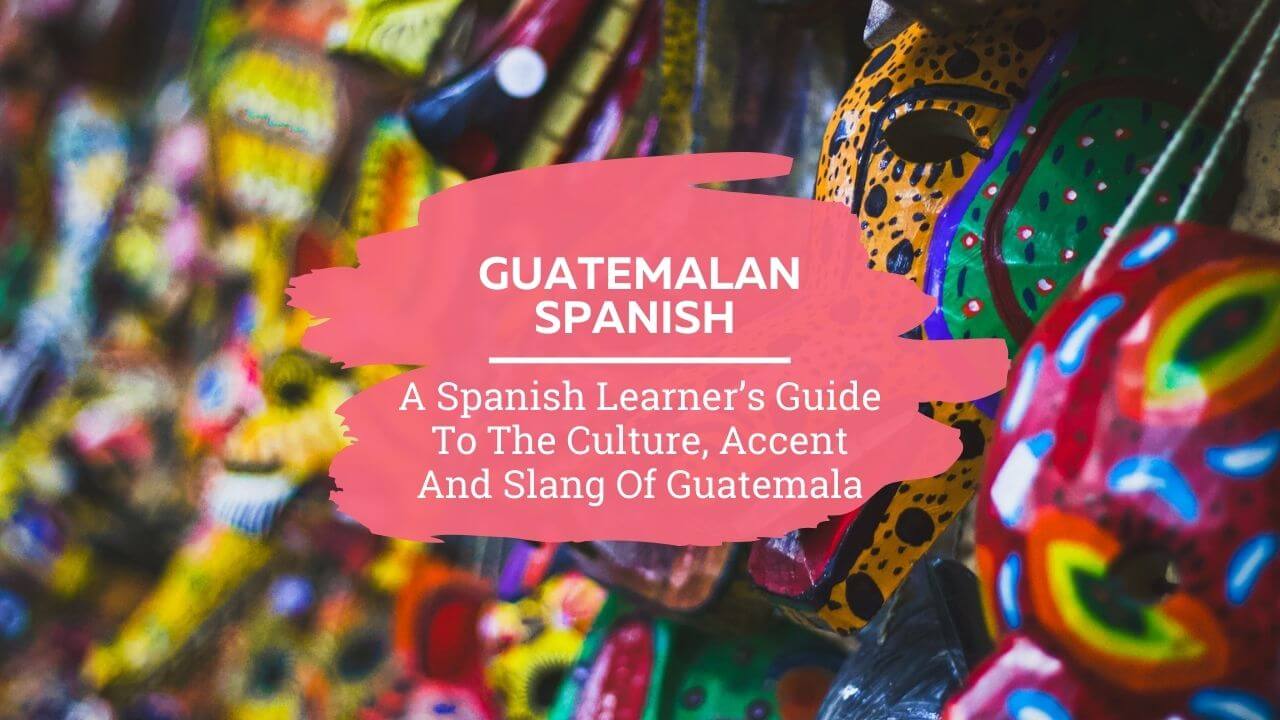 Guatemalan Spanish: A Spanish Learner’s Guide To The Culture, Accent And Slang Of Guatemala

Hey Spanish learner – welcome to Guatemala and Guatemalan Spanish! This beautiful country in Central America is well known for its Mayan culture, its amazing volcanoes, and its colourful cities.

Although many native languages coexist in this territory, Spanish is the one most spoken by the population.

In this article, I’ll explore everything about the characteristics of this dialect, and we’re going to figure out why is so fascinating. Ready? ¡Vamos!

There are those who say that Guatemala is one of the most diverse countries in the world if we talk about linguistics…and they are right. In fact, inside the territory of this country, made up of 8 regions, 25 languages are spoken!

And the most interesting thing is that most of them —twenty-two— are not Indo-European languages, but rather native languages of the Mayan people.

So… how many people speak Spanish in Guatemala? According to official statistics, 56% of Guatemalan people consider themselves ladino; this is a sociocultural category that designates the non-indigenous population, generally Spanish-speaking mestizos.

Dialects always vary by region—that’s nothing new! In some countries, this variation is obvious (Have you ever heard an Andalusian and a Galician speak?). However, in Guatemala, the pronunciation is quite similar throughout the country.

Even so, some academics of the language have proposed dividing the country into 3 dialect zones, such as professor Katrine Utgård, author of the Linguistic-Ethnographic Atlas of Guatemala.

Beyond the division by regions, as I have said, the Guatemalan accent is usually quite similar throughout the country.

Let’s see some of its main characteristics in terms of phonetics:

It all depends on the context. While the voseo is normally used as a form of address among friends, relatives and people you trust, the tuteo is more used between couples, or as a form of formality with unknown women.

The voseo is not only pronominal; it also modifies the verb forms of the second person singular. It may seem a bit complex (that's just the grammar villain messing with you), but with a little practice, you'll be sure to learn it soon.

Here you have a table with some main differences between the voseo and the tuteo.

This country has its own slang: hundreds of words that are used daily among Guatemalan people.

These terms are known as chapinismos, and many of them are influenced by one of the 24 Guatemalan languages from the Mayan and Nahuatl languages spoken in the country.

And now it’s time of the juicy part: the typical phrases! These are some sentences that you can easily hear any Guatemalan say. And you should know what they mean before you go so you don’t miss anything in the conversation.

Literally, clavo means “nail”, but Guatemalans use it as a way of saying “shame”. So, ¡Qué clavo! is the equivalent of the Mexican ¡Qué oso! or the Spanish ¡Qué corte!: they say it when they can only think “I wish the earth would swallow me up!”.

You know that feeling when someone hits the nail on the head? Well, in these cases, Guatemalans will say ¡Cabal!, which is something like “Exactly!”.

Haceme la campaña (literally, “make me the campaign”) is a way of saying “do me a favour”. You can find an equivalent expression in Río de La Plata Spanish—the one used in Argentina and Uruguay: haceme la gauchada.

There are a lot of swear words in Spanish — I bet you know a couple.

Despite the fact that there are those who consider that swear words are sometimes necessary (have you heard the hilarious speech of the Argentine humorist Roberto Fontanarrosa about it?), sometimes it’s preferred to replace those words with more innocent terms. Púchica is one of them.

Don’t be surprised if you see that a Guatemalan says regáleme to the clerk at the grocery store. Although regalar means “to give away”, in Guatemala it’s often used as a synonym for “to give” or “to sell”. This also happens in Colombian Spanish.

Guatemalan Spanish is fascinating, with the Mayan influence on the language being one of its most interesting features. And what do you think about the slang?

It may seem a bit hard to incorporate these phrases into your day-to-day life, but I encourage you to try it. I promise you that practice is the key to results!

If you want to learn to speak Guatemalan Spanish, as well as other Latin American varieties, I invite you to try our StoryLearning system, where you can listen to exciting stories in all accents.