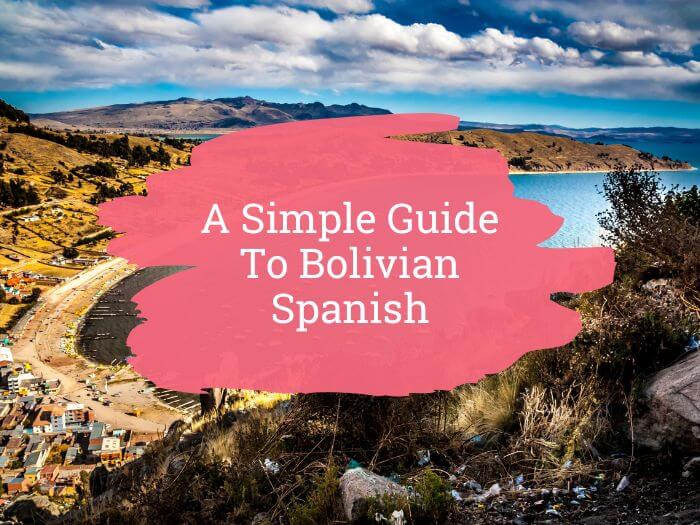 A Simple Guide To Bolivian Spanish

If you're learning Spanish, then it might be because you want to visit some of the most beautiful countries in the world, such as Bolivia.

It’s home to the Salar de Uyuni (known as “the world’s largest mirror”), to Lake Titicaca, and to the Cerro Potosí, among many other natural and cultural marvels.

If you’re planning a trip there, prepare to be in awe! Bolivia has a diversity of landscapes and people you’ve never seen.

So you may want to start training your ear with a little bit of Bolivian Spanish. Or maybe you’re not planning a trip at all; maybe you’re just curious and want to know all about these incredible Spanish variations (I don’t blame you: I find them fascinating too).

In any case, you’ve come to the right place. Here you're going to learn all the basics of Bolivia’s language (the main one, at least). And we’re going to spice it up here and there with some Bolivian facts about their country and their culture, because, well, why wouldn’t we? ¡Vamos!

First things first: when learning about Bolivian Spanish, you have to take into account that it’s only one of Bolivia’s many official languages. There are truly lots of them; Bolivia is, in fact, one of the most linguistically diverse countries in the world.

Since 2009, its Constitution establishes that the country is “plurinational”, which means that it recognises the different nations and cultures that inhabit its territory.

That translates ―yes, this is a linguistic pun― into a huge variety of official languages. Do you wanna guess how many? Be my guest. Do you have a number? Well, great. Now I can tell you the answer. There are… 37 official languages in Bolivia!

Of course, not all of them are equally popular. Spanish is by far the most widely-spoken language in the country ―almost 90% of the country's population speaks or understands it―, but up to 30% of the people use it as their second language.

Among the indigenous languages, Quechua and Aymara are the most popular, with around three million speakers combined (as a reference, Bolivia has a population of approximately eleven million people in total).

Although they are similar in a lot of ways, due to a long coexistence in the region, Aymara and Quechua belong to different linguistic families, which makes their relationship with Spanish quite unique in every case.

And, to top that, you can also find a lot of people who speak Tupi languages, like Guarani, especially in the Eastern region of the country.

You can imagine how that immense diversity affects the way Spanish is spoken around Bolivia. That is, of course, the fun part. Let’s dive into it!

There are two main variations of Spanish in Bolivia, and they are as different as the landscapes that surround them.

In the West, in the rocky Andean region, you have a variation called ―quite logically― Andean Spanish, which coexists very closely with Aymara and Quechua.

In the East, in the Llanos region where the Amazonian jungle begins, you have Camba Spanish and a bigger proportion of monolingual and native Spanish speakers.

In terms of population, Andean Spanish ―which is similar to the variations spoken in Perú, Ecuador, and the North of Argentina and Chile― is the most common, because the Andean Region is the most densely populated.

That’s why we’re going to focus on that – but be warned. If you’re planning to visit Santa Cruz (and you should!), you’re going to hear a very different variation, more similar to Paraguayan and Argentinian Spanish.

In most cases, Spanish variations differentiate themselves by the way they pronounce specific letters. On one hand, you have the -ll / -y pair; on the other hand, you have the -c / -s / -z group. Finally, you also have the -r sound, one that is usually very difficult for English speakers.

So how does this work in Bolivian Spanish? Well, let’s see. In Bolivia, like in Spain, the -ll and the -y are very distinct. This is not the case, for example, in Argentina, where people tend to pronounce those letters the same way (that’s called yeismo, by the way).

On the other hand, Bolivian Spanish, like most American variations, has seseo, which means it doesn’t make a difference between the -c, the -s and the -z. That’s a huge difference with Peninsular Spanish ―the one spoken in Spain―, where the -z sound is very characteristic.

Finally, you have the -r sound. Most Spanish variations have a very robust, round -r; but not Bolivian Spanish. Here, the sound is more similar to a -sh, which should be, in a way, easier for English speakers to pronounce, because we do have that sound in our language. What a coincidence, am I right?

As you can imagine, in Bolivia, the interaction between indigenous languages and Spanish produces a lot of very interesting grammar phenomena.

Well, I guess they are interesting only if you like grammar; I know I do, but I can’t blame you if you don’t. The thing is: they can be incredibly specific, and I don’t want to get too technical, so let's focus just on the bigger, more notable things. Are we good?

One of the most important things, when speaking about Spanish variation, is how the second person works.

Bolivian Spanish uses tú and ustedes. That means the verb conjugation looks like this:

As you can see, the main difference between Bolivian Spanish and Peninsular Spanies lies in the second person plural: while Spaniards use vosotros, Bolivians use ustedes. A quick tip: ustedes has almost always the same conjugation as ellos/ellas.

Bolivian Spanish has another peculiarity. We’re not going to spend much time on it because it can become highly technical, so this is more of a warning than an explanation: Bolivians use the lo pronoun a lot (and I mean a lot).

This is caused by an interference of Quechua grammar on Spanish grammar, and it serves a purpose, but there are whole books written about the use of pronouns in Andean Spanish, so I'm just going to leave it here. Don’t be surprised if you hear lo an unusual amount of times!

All right, we’re now in the fun part: Bolivian slang. Here are some words or phrases that Bolivians use very frequently:

A camote is usually a plant, more specifically a kind of potato. But in Bolivia, if you say Estoy camote (I’m camote) you’re saying something else: you’re saying you’re in love.

In Bolivia, markets and street vendors are everywhere. As you can imagine, that means there is a decent amount of bargaining and negotiations involved. The word yapa (which is a noun with its own verb, yapar) means “a little extra”.

If you’re buying something like a kilo of potatoes, and you say ¿Me yapa?, it’s very likely that the vendor will add an extra potato or two as a courtesy.

The word guagua can be a real headache for non-native Spanish speakers, because it means different things depending on which country you are in. If you’re in Puerto Rico, for example, a guagua is a bus; but in Bolivia, it means “child” or “baby”.

In Bolivia, a guachada is a favour, so if you say ¿Me haces la guachada?, you're asking for help.

This is curious because in Argentina, for example, guachada means exactly the opposite: a bad thing, something that had the intention of doing harm. For favours, Argentinians use gauchada, a very similar word.

The meaning of this expression is very specific: to eat some empanadas. In Bolivia, it’s not uncommon to use the word tucu as an equivalent for “empanada”, because the empanadas from Tucumán (an Argentinian province) are very prestigious.

In Bolivia, you don’t wear flip flops; you wear ojotas. This word often applies to other kinds of open footwear, and it comes from the Quechuan word ushuta.

Michi means “greedy” or “stingy”, and it’s used mainly as an insult.

This expression is most commonly used to indicate resignation and, in a way, strength. If something bad happened to a friend, you can say Moral nomás, as a way of saying that there’s nothing more to do.

Torísimo is an adjective derivated from toro, “bull”. If you say La fiesta estuvo torísima, you mean that the party was really good.

In some Spanish variations, this expression means “don’t get mad”. This is not the case in Bolivia, where No te rayes means “don’t bother”.

After a long day, you may want to open a cold chela, that is, a beer.

A huaso is a shameless person, o maybe someone with a bad attitude. If you say Él es un huaso, you’re saying that someone is very rude.

Maybe you had too many chelas… Because that’s how you get a chaqui, a hangover.

A puriskiri is a traveler, a walker, a nomad. If you go to Bolivia, you may become a puriskiri!

The meaning of this word is difficult to translate, in part because in Quechua and Aymara  ―these languages have a lot of shared words― has a ritual sense.

You may say Jallalla is a greeting, and it’s not rare to hear people saying it out loud when entering a party; it’s a way of saying hi to a lot of people at once. But it is also a way of wishing good luck and a word that expresses thankfulness.

The Basics Of One Of Bolivia’s Languages

The world of Bolivian Spanish is quite fascinating, am I right? The relationship with Quechua and Aymara, among other indigenous languages, enriches this variation in a very unique way.

Of course, this is still Spanish, and it’s comprehensible for almost all Spanish speakers (leaving aside some funny misunderstandings!). Wanna be one of them? You’re in luck!

You can learn Spanish with my unique StoryLearning® method. With this method, you learn through the best part of every language: stories. Sound fun? Well, let me tell you: it is! If you want to learn more, you can find all about StoryLearning at this link. See you soon!