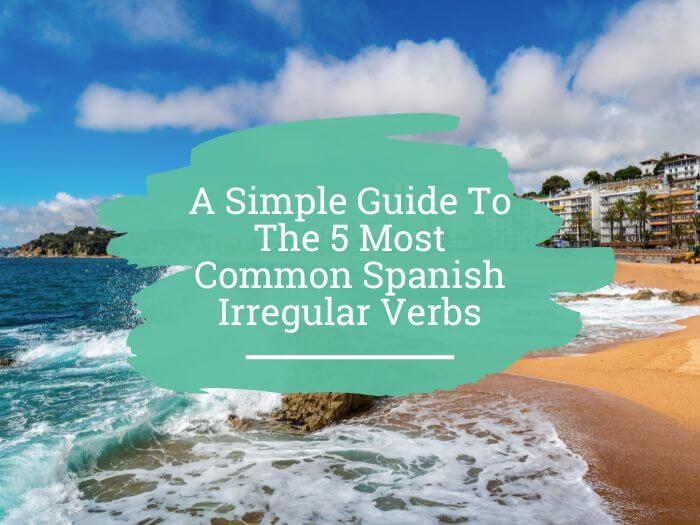 A Simple Guide To The 5 Most Common Spanish Irregular Verbs

It’s time to talk about one of the most complex parts of learning Spanish: Spanish irregular verbs.

But they don’t have to be a problem, because there’s nothing to fear from a bunch of grammar rules. In fact, I’m sure that you’ll get the hang of them quickly!

In this article, you'll learn how to conjugate the five most common Spanish irregular verbs. And I encourage you to refer back to it as many times as you need.

What Are Spanish Irregular Verbs?

Something irregular doesn’t follow an established norm. So irregular verbs are those that have particular conjugations.

Sometimes, they have subtle changes, and it’s even possible to learn a trick to conjugate them (as happens with estar (to be)). But other times the changes are much more radical, and you'll have to learn them, as happens with ir (to go).

Anyway, don’t be scared: although there are many Spanish irregular verbs, there are a number of key verbs that you'll hear all the time.

That means by following the rules of StoryLearning and reading books in Spanish, you'll pick up these common irregular verbs without studying or memorisation.

Next, you'll discover what they are; but first, here's a brief explanation of the main characteristics of Spanish irregular verbs.

How To Remember Spanish Irregular Verbs

Generally, Spanish irregular verbs have the following alterations in their lexical roots:

How To Know If A Verb Is Irregular?

Despite having paid attention to the previous section, it’s normal that you still have certain doubts. That’s why we have a little trick for you so that you know when a verb in Spanish is irregular.

All you have to do is try to conjugate the verb following the conjugation of a regular Spanish verb, like amar (to love), temer (to fear), or partir (to leave). Now, if the sound associated with the pronunciation changes, it’s an irregular verb!

The 5 Most Common Spanish Irregular Verbs

Now, here's what you've all been waiting for: a list of the most common Spanish irregular verbs, with their respective conjugations in the indicative (i.e not the Spanish subjunctive).

The verb ser (to be) may be the quintessential irregular verb. If you have doubts about the difference between ser and estar, you should know that:

Having made this clarification, let’s take a look at the conjugation of ser with the present, preterite, imperfect, and future tenses.

The verb hacer is usually translated as “to do” or “to make,” but it can be used in other contexts, such as when you talk about the weather. Look how it’s conjugated, and notice how the root changes in the imperfect indicative from an “e” to an “i”.

When you see some conjugations of the verb ir (to go) such as fui or vaya, you might think that it’s a different verb—yet it’s the same! Yup, we could say that ir is super irregular. Let’s take a look at it in detail.

The verb estar is another of the most important verbs in the Spanish language and, of course… it’s irregular. But remembering how to conjugate it is easy, because its root is always the same: est.

Poder (can) is an interesting case, because it allows us to see how the vowel “o” is changed to an “ue” in the present indicative: yo puedo (I can). Let’s see all the conjugations of this verb.

The verbs that you've just learned are the most common, but there are many other Spanish irregular verbs, such as:

The verbs you've just learned will be part of any conversation you have in Spanish; so learning how to conjugate them is essential.

Don’t worry if it takes some time to get to grips with them. And don’t be afraid to make mistakes either. After all, making mistakes means you're learning!