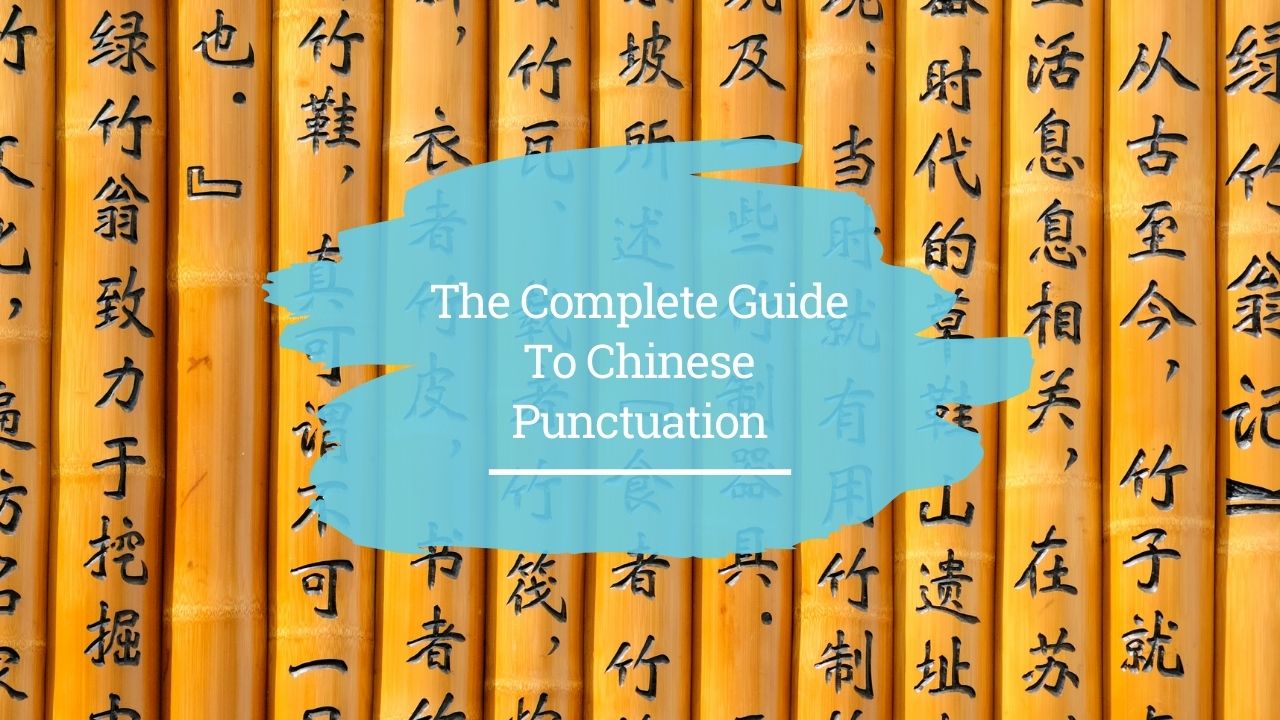 The Complete Guide To Chinese Punctuation

With so many other things to think about when learning Chinese, the fact that Chinese punctuation might be different may not even occur to you.

As it happens, Chinese punctuation is broadly similar to English punctuation, but there are also some differences – as well as a couple of extra punctuation marks to learn. So to help you get started, here’s my in-depth introduction to this topic.

With Chinese Uncovered you’ll use my unique StoryLearning® method to learn Chinese through story… not rules. It’s as fun as it is effective. If you’re ready to get started, click here for a 7-day FREE trial.

A Bit Of Background To Chinese Punctuation

Chinese characters are thought to have originated over 4,000 years ago when they were carved into bones and tortoise shells as a way of communicating with ancestors.

As the writing system evolved, characters were also cut into stone tablets as well as being written on scrolls with brushes and ink.

Classical Chinese, whether on stone or on paper, was traditionally written in columns from top to bottom, with the columns running from right to left – so starting top-right and finishing bottom-left.

When written like this, Classical Chinese did not use punctuation. However, some symbols were sometimes used to clarify the meaning of texts. However, these were added later to aid comprehension, and the punctuation wasn’t considered an integral part of the text itself.

This continued to be the case until very recently, and it is only since around 1930 or so that punctuation has come to be seen as an essential part of Chinese writing.

This came about partly through contact with Western culture, and modern Chinese punctuation includes several punctuation marks borrowed from European languages – as well as the original Chinese ones that have been in use for hundreds or thousands of years.

How Chinese Punctuation Differs From English

Before we look at the various punctuation marks used in Chinese, let’s say a few words about how the use of punctuation differs from English.

In Chinese writing, each character occupies the same amount of space on the page, so you can think of it as being written on a grid – each character takes up one square on the grid.

As part of the same system, each punctuation mark also occupies one square on the grid, so a Chinese full stop or a comma, for example, would occupy the same amount of space as any other character.

Nowadays, like English, modern Chinese is usually written horizontally from left to right, so a punctuation mark would take up one space to the right of the last character.

When writing in in columns, a punctuation mark is written below or to the right of the character before it.

So now let’s look at the punctuation marks in Chinese and how they are used.

Here are the punctuation marks that Chinese has borrowed from European languages.

Chinese uses a comma in much the same way as English, so it appears when you need to separate clauses or when you want to indicate a pause. Here’s an example:

The major difference between Chinese and English is that this type of comma can’t be used for lists. Chinese has a special punctuation mark for this, which we’ll come to shortly.

Chinese uses a question mark in the same way as English, for example:

Chinese also use the same exclamation mark as English, and it works in the same way. Here’s an example:

Colons can be used in Chinese in much the same way as in English, like this:

Similarly, semi-colons also appear in Chinese text, and they are used just like in English, for example:

Chinese also has a couple of punctuation marks that are different from English and other European languages, so let’s look at these now.

The Chinese full stop (or “period” for my American readers!) comes at the end of sentences just like in English. However, as you can see, it is written differently, appearing as a small circle.

When you remember that punctuation marks in Chinese take up the space of a whole character, this makes sense – because a dot like the English full stop would look too small on the page!

Due to convention, I haven’t included full stops with other examples in this post – but here’s an example that includes them:

One special punctuation mark in Chinese that has no equivalent in English is the 顿号 dùn hào, technically known as the “enumeration comma”.

I mentioned above that a regular comma can’t be used for making lists – and that’s because this punctuation mark is used instead.

Some Other Punctuation Marks To Note

Here are a couple of other punctuation marks that are used in Chinese.

However, in Taiwan, where traditional characters are still used, different speech marks are employed. Instead of double speech marks, these two symbols are found: 「 and 」

For quotes within quotes, these two symbols are used: 『 and 』

When Chinese is written vertically in either simplified or traditional characters, these same symbols rotated through 90° are used: ﹁ ﹂ and ﹃ ﹄

This punctuation mark is usually used to separate the different parts of the Chinese version of foreign names, for example:

This punctuation mark can also be used to separate the numbers in dates, like this:

This punctuation mark is used when writing the title of a book or film etc., like this:

Ellipsis works the same in Chinese as it does in English. The only difference is that six dots are used instead of three:

With pinyin, you can use all the same punctuation marks as you would with characters, including the 顿号 dùn hào (enumeration comma). The exception is that you should use a Western full stop rather than a Chinese one.

You should also follow Western conventions for capital letters, so the first word of a sentence and the names of people and places etc. should take a capital letter.

With pinyin, there is some ambiguity over the use of spaces. Generally speaking, lexical units that are considered to be single words are written together and spaces are used to separate them.

However, defining what constitutes a word can be problematic. Something like 知道zhīdào (to know) is clearly a word, but what about verb-object constructions like 吃饭 chīfàn (to eat, but literally “to eat cooked rice”)?

In short, this is a grey area, and different textbooks follow different conventions.

There is also one punctuation mark that is found in pinyin that isn’t used with characters, and that’s the apostrophe.

Apostrophes are used to avoid ambiguity over how to read a word.

For example, with no apostrophe, xian could represent the character 先 xiān (first) or it could be 西安 Xī’ān (Xi’an, the city in Shaanxi province most famous for being the home of the 兵马俑 bīngmǎyŏng, the Terracotta Army). But with the apostrophe, the meaning is clear.

However, when written without tone marks, without this spelling convention, the two would be indistinguishable when written in Roman letters.

Simple To Master – Once You Know The Rules

As you can see, there’s nothing particularly challenging about Chinese punctuation. And for the most part, it is very similar to English.

Make sure you use correct punctuation when you type messages to your Chinese friends or when you write compositions in Chinese, and with practice and exposure, it will soon become second nature.