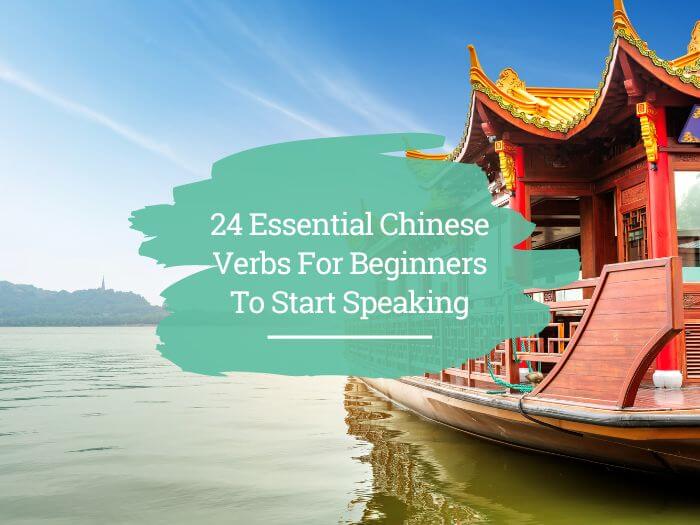 When you start learning Chinese, it’s vital to build up your stock of basic vocabulary to allow yourself to be able to express the widest range of ideas as quickly as possible.

All types of words are important, but verbs are especially vital since they allow you to talk about actions that take place.

So to help you get speaking right from the start, here’s a list of essential Chinese verbs that will be useful to you as a beginner.

With Chinese Uncovered you’ll use my unique StoryLearning® method to learn Chinese through story…not rules. It’s as fun as it is effective. If you’re ready to get started, click here for a 7-day FREE trial.

Probably the first of these essential Chinese verbs you will learn is 是 shì, meaning “to be”.

However, it’s important to understand that this verb doesn’t work in the same way as its counterpart in English.

In Chinese, 是 shì is used to define things rather than to describe things. This means you can use it to state somebody’s job or somebody’s nationality, but not, for example, to describe somebody’s height.

This is because, in Chinese, adjectives carry the inherent meaning of ‘being’ something, so they don’t need the verb 是 shì, and using it with an adjective would be wrong.

Don’t worry if this sounds a little strange – it’s something you’ll quickly get used to as your Chinese progresses!

*In Chinese, 英国人 yīngguórén literally means “England person”, so it’s not an adjective

The second of the essential Chinese verbs you’ll probably learn is 有 yŏu, which can mean either “to have” or “there is/are”, depending on the context.

In Chinese, to make a negative sentence, you usually use the negative particle 不 bù (not) before the verb. The exception to this rule is with 有 yŏu – with this verb, you use 没 méi instead.

The main use of 要 yào is to express wanting something or wanting to do something. However, it also has some other uses.

It can be used as a marker to express the future, and it can also be used to mean “must”. In the second person, it always expresses obligation.

In the negative, it’s also one way to tell someone not to do something – a kind of negative imperative.

This flexibility of meaning can take a little getting used to, but it’s usually obvious how it is being used from the context.

The first meaning of 想 xiăng is “to want (to do something)” – but unlike 要 yào, you can’t use 想 xiăng to say you want a thing.

Finally, its third meaning is “to miss”, as in to feel a yearning for something.

The most common way to say what you think is to use the verb 觉得 juéde. It works just like the English verb “to think” when used to express this idea – but not in the sense of “to ponder”, unlike 想 xiăng.

The primary meaning of 会 huì is to express knowing how to do something. It can also be used as a future marker, similar to 要 yào.

The Chinese word to express knowing facts is 知道 zhīdào. It works much like its English counterpart.

Both 能 néng and 可以 kĕyĭ mean “can”, and often, they can be used interchangeably. However, there is a subtle difference in that 可以 kĕyĭ implies permission from an outside source while 能 néng refers to an ability to do something.

(Here, the meaning is ‘not allowed’ to swim – contrast with the meaning in the example in #6 above, which expresses the ability to swim)

As your Chinese progresses, you will learn more complex ways to use 去 qù and 来 lái, for example, with complements of direction.

However, the easiest way to use them for beginners is just to place them directly before the destination – with no prepositions required.

For example, in the English sentence, “I’m coming to see you”, the implication is that the direction is relative to the person you’re talking to rather than to you. But in Chinese, this doesn’t work. You would have to say the equivalent of “I’m going to see you” instead.

Another meaning of 来 lái is “to bring”, and it’s a common word to use when asking a waiter to bring something.

*The speaker is already in Beijing

These two words work in much the same way as in English. However, be careful since the only difference between “buy” and “sell” in Chinese is the tone.

买 măi (buy) is third tone, the tone that falls and then rises again, while 卖 mài (sell) is fourth tone, the falling tone.

Also, notice how similar the characters are – pay attention to this when writing them.

This is the Chinese verb “to study”. Often, it can just be shortened to 学 xué.

In Chinese, it’s more common than in English to include a verb to say what you like doing rather than just saying you like a thing.

For example, in English, we might say “I like chocolate”, but in Chinese, a more normal way to express it would be to say “I like eating chocolate”.

However, that’s not to say it’s incorrect to simply say you like a thing – it’s just a less common way to express things in Chinese.

Stronger than 喜欢 xĭhuān, 爱 aì can be used in Chinese to talk about things or people you love in both the romantic and the non-romantic sense.

It’s a useful verb to know – and of course, everyone wants to know how to say “I love you” in any new language they’re learning!

In Chinese, one word, 做 zuò, is used to cover the meaning of both “do” and “make” in English.

It's a common word that can be used for lots of things, but also be aware that many expressions use more specific words, and 做 zuò can’t be used.

For example, for “make tea” you can say 泡茶 pào chá or 沏茶 qī chá – but not *做茶 zuò chá, which is incorrect.

Also, don’t confuse the character 做 with 作. They are both pronounced the same, and the meanings are related, but the second is usually found in combination with other characters such as 作业 zuòyè (homework), 作家 zuòjiā (author, writer) or 工作 gōngzuò (work).

A word in Chinese that’s more widespread than in English. Its primary meaning is “to play” as in “play a game”. It can also be used for video games.

However, it also has a wider meaning simply of “having fun”, and in Chinese, it’s often used when talking about things like going out with friends.

In English, the fact that you are going out with your friends to “have fun” is implicit, but in Chinese, it is explicitly stated.

This can sometimes lead to adult Chinese speakers making statements in English like “I’m going out to play with my friends” which, needless to say, sounds a bit strange in English – and also quite cute!

Note that 玩 wán is not used for sports, musical instruments or games like cards or chess – for those, other more specific verbs are used instead.

The basic meaning of 给 gĕi is “to give”, and when used like this, it is quite similar to its English counterpart.

However, it has another separate meaning that indicates “doing something for someone”, making it an extremely important grammatical word in Chinese too (although it’s not really a verb when used in this way).

Some essential Chinese verbs are closely associated with a particular object, and the verb-object combination is almost considered a verb in its own right.

Literally translated, this means “to eat cooked rice”, but the true meaning is something more like “to eat a meal” or simply “to eat”.

吃 chī can be used with other objects, but it’s not usually used alone – except where the thing being eaten is implied.

Let’s have a look at just four examples of these verb-object combinations to give you the basics of how it works – but bear in mind that there are quite a few others.

As explained above, the verb 吃 chī is normally encountered with an object telling you what is being eaten, and unless you’re talking specifically about eating something else, the object is 饭 fàn, even if you don’t literally mean “cooked rice”.

(Here, the object, jiaozi is understood, so it doesn’t need to be repeated)

(In Chinese, this is a common way to greet people, and although the literal translation is “have you eaten”, a more accurate rendering would be “how’s it going?” or even just “hello”)

走 zŏu means “to walk”, but it is often encountered with 路 lù (road), with the same meaning.

走 zŏu alone can also be used to mean “to leave”.

开 kāi is a useful verb with several meanings but when combined with 车 chē (vehicle), it means “to drive”.

In other contexts, 开 kāi alone can mean “to open” or “to turn on, switch on”.

Essential Chinese Verbs: Different From English, But Not So Different

However, don’t let this put you off since the differences are not that huge. And once you start practising these essential Chinese verbs and using them, you’ll see that most of the confusion and difficulties simply begin to fade away.

And to make that process even easier, apply the rules of StoryLearning® and read books in Chinese. As you immerse yourself in the Chinese language by reading, these essential Chinese verbs will quickly become second nature and you'll be using them with ease!