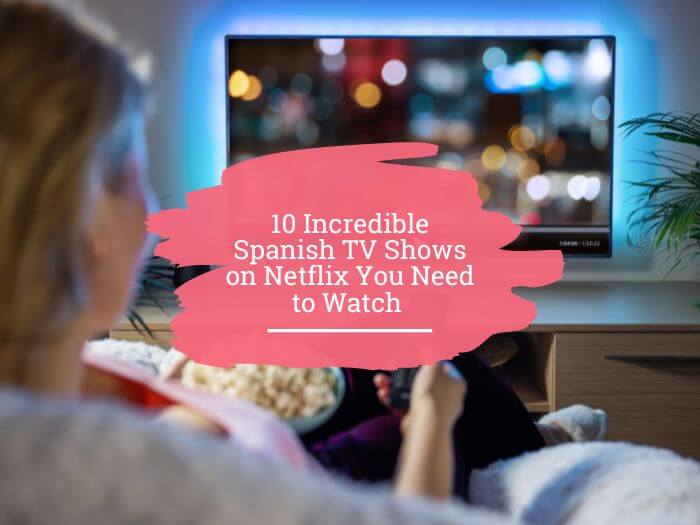 10 Incredible Spanish TV Shows On Netflix You Need To Watch

When learning Spanish or any new language, ear training is key and what better way to do it than while enjoying Spanish TV shows on Netflix?

Streaming platforms have become an important part of our lives, and we all love to immerse ourselves in those tangled dramas, action-packed stories, and shows about cops infiltrating dangerous groups.

In this article, you're going to discover the 10 best Spanish TV shows on Netflix for you to enjoy while learning or improving your Spanish.

You'll discover Spanish TV shows on Netflix from different countries, so you can listen to many accents, such as Argentine Spanish, Chilean Spanish, and Spanish from Spain, among others.

A little advice? Watch these Spanish TV shows on Netflix with English captions and, when you feel ready, you can replace them with Spanish subtitles. That way, you can follow the dialogues while reading the text! Now, do you have the popcorn? Here we go!

You probably already know “La casa de papel” or “Money Heist”, the TV series from Spain that has been a success worldwide.

But if you haven’t watched it yet, here’s a quick recap: a mysterious man known as “the Professor” recruits a group of ambitious young people to stage a bank robbery.

You’ll be able to listen to the Spanish accent, mainly the one spoken in Madrid, its capital. But there are also characters from Andalusia —a region in the south of Spain— and, from the third season onwards, from Argentina too.

“Élite” is another of these Spanish TV shows on Netflix from Spain. In this series, a group of rich teenagers, who attend a private school, must solve a murder mystery.

This is a series for teens, so there are many Spanish youth slang terms. This is good news if you want to focus on learning how young Spanish people actually speak, although it may not be the best option if you are a beginner.

Élite’s school also has foreign students, such as the Mexican Danna Paola — did you listen to her music? —, and others from Chile and Argentina, so it’s a good show to learn different accents.

3. The House Of Flowers

If you like comedy-dramas, then “La casa de las flores “(or “The House of Flowers”, in English) is for you.

This is a Mexican TV series in Spanish about a prosperous family flower shop. However, behind the appearances, there is a dysfunctional family that faces a lot of problems—just like any family, right?

“Pasión de Gavilanes” (known as “Hidden Passion”, although it literally means “Passion of Hawks”) is a telenovela, a TV format similar to the American soap opera.

Telenovelas usually have a lot of episodes, many characters, and very dramatic situations. “Pasión de Gavilanes” is one of the most important shows of its genre (and it’s super long: it has 259 episodes!).

I want to especially recommend “Pasión de gavilanes” to learn Spanish, because its producers made an effort to ensure that the accent spoken in the show is not too characteristic of any particular country.

In other words: it’s a perfect show to learn Spanish without dialect variations.

Do you like fantasy, magic, and time travel? Then, “Siempre Bruja” (“Always a Witch” in English) is the next of your must-watch Spanish TV shows on Netflix.

This Colombian series is about the life of a young slave woman in 17th-century-Cartagena de Indias, when she is sentenced to death for witchcraft.

Thanks to a spell, she manages to escape and travel to the future, landing in 2019. Now, she will have to learn how to live in modernity and find a way to return home.

Welcome to Argentina, land of mate, good cuts of beef… and, of course, football!

But, unfortunately, not everything is fun and games when we talk about this sport: there’s also corruption and power struggles. “Puerta 7” tells the story of a man who infiltrates a barra brava—a group of radical soccer fans.

With this Netflix series in Spanish, you will hear the accent of Río de la Plata Spanish, which is the one spoken in Buenos Aires (Argentina) and Uruguay.

Surely, you’ll notice that they use vos as a second person pronoun instead of tú, and that their way of pronouncing the “y” and the “ll” is more similar to a “sh”.

Is this the Argentine “Prison Break”? Well, probably!

The premise is classic: an ex-cop goes undercover in a prison to solve a mystery. There, he will have to face not only prison gangs, but also the corruption of the prison system.

“El Marginal” is a fairly crude series — you've been warned! But it’s also interesting: the Spanish accent you'll hear is the slang spoken in Argentine prisons.

I assume that you know Luis Miguel, one of the all-time most important singers of Latin America. But, if you don’t know him, this is a great opportunity to learn a little more about his life while you improve your Spanish.

“Luis Miguel: la serie” is a biopic about this Mexican singer, considered by Billboard magazine as the best Latin artist of the last 25 years.

The show goes about his rise to stardom, and it explores topics such as the death of his father and the mysterious disappearance of his mother.

What comes to mind when you think of Chile?

Probably, the snowy mountains of the Andes. Well, this is precisely where “42 Días en la Oscuridad” (“42 Days of Darkness”) was filmed.

This Spanish TV show on Netflix tells the story of the kidnapping of a woman, and it’s inspired by a true story that shook all of Chile in 2010.

You will listen to Chilean Spanish, with its characteristic conjugation of verbs in the second person singular (where “you eat” is tú comí instead of tú comes, for example).

Finally, you've made it to number 10 in this list of the best Spanish TV shows on Netflix and it's the series “El último bastión”, from Peru.

This exciting series is about the Robles, a family born and raised in the Americas, in the middle of the very Peruvian War of Independence from Spain.

Exactly: you’ll learn a ton of history while you are learning Spanish!

The list of Spanish TV shows on Netflix is really larga. There's everything: historical series, drama, comedy… Even reality shows!

But I could only choose 10! I hope you like these Spanish TV shows on Netflix, and that they help you improve your Spanish!