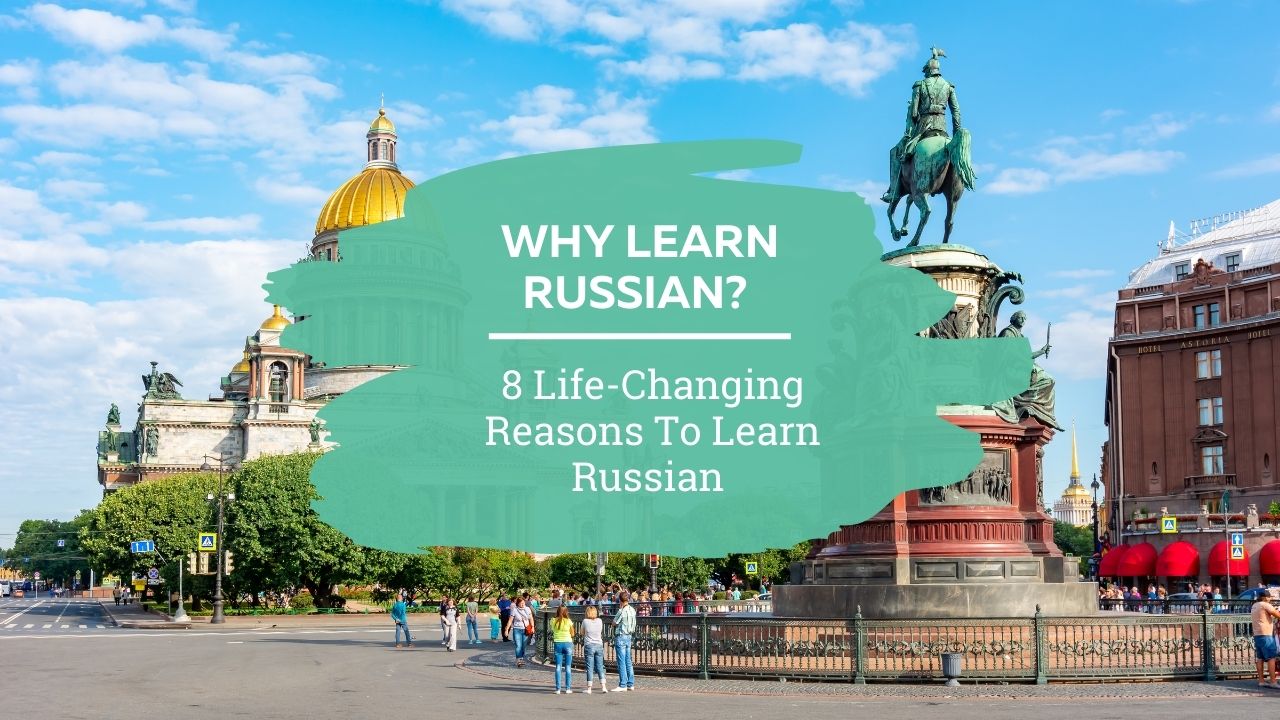 So you’re thinking about learning a new language and you're wondering why learn Russian?

That’s great! Learning another language is always a positive experience to help us grow. It always brings unexpected benefits far greater than just communication, most often helping us explore a new part of the world.

But why should you learn Russian in particular?

When people think about learning another language, they often consider something like Spanish, French, or Japanese. Although Russian isn’t usually at the top of the list, there are a lot of compelling reasons to give it a look.

In this post, you’ll find out about 8 excellent reasons that you should learn Russian. Whether the language has piqued your interest due to travel, culture, history, or something else, Russian has something for you.

While we’re here, if you’re interested in learning Russian through stories, rather than grammar lessons, my top recommendation for language learners is my Uncovered course. This teaches you a new language via StoryLearning®. Find out more and claim your free 7-day trial.

For a quick overview of these 8 reasons to learn Russian, check out the infographic below. And then keep scrolling to read more details about each one.

1. A New Way Of Thinking And A New Perspective

This first reason is probably the most obvious, but good things are worth saying again! When you learn a new language, you learn grammar and new vocab, but you also learn about another culture, way of thinking, and way of looking at the world.

Really, the best way to understand another culture or people is by understanding their language. So when you learn Russian, you can take in a whole new perspective that helps you understand Russian and Eastern European culture so much better.

And by better understanding Russian culture, you can reflect more on your own.

When you only know one language, you tend to see the world in one way. However, learning another one is a fast track to looking at the same picture through a new frame of mind. In other words, diving into Russian is a great way to open your eyes to a broader world.

2. Russian Is A Global Language

Today the Russian language has the 8th largest number of speakers in the world. With more than 258 million speakers worldwide, there’s no doubt that Russian is a global language.

Obviously you’ll find plenty of Russian speakers in Russia itself, but there are loads of other Russian speaking countries around the world. With Russian, you can communicate with people in Eastern European countries like Moldova, Lithuania, and Ukraine.

Likewise, you’ll have the opportunity to use plenty of Russian in Caucasus nations like Armenia, Azerbaijan, and Georgia as well as countries in Central Asia, like Kazakhstan, Kyrgyzstan, and Tajikistan.

Aside from these countries, a bit of Russian can also give you access to the enormous Russian-speaking diaspora found around the world. From Israel to Northern China to Brazil, you’ll never know when some Russian could come in handy.

3. Russian Can Be A Career-Booster

Since Russian is a global language with so many speakers, learning the language could be a great step for anyone’s career.

With many Russian-speaking nations experiencing economic upswings, knowing the language could be the key to striking the ideal business deal.

In other words, knowing how to speak Russian can create new business opportunities in Russia and the whole world.

Even if you don’t plan on doing any international deals at the moment, knowledge of Russian can help you stand out in the job market.

While others might know more common languages like Spanish or German, having Russian on your resume will help you stand out from the crowd.

When people think about history and the Russian language, many go to the Soviet era.

However, the Russian language goes back centuries and knowing Russian can give you access to history from periods like the Kievan Rus’, the Muscovy Empire, Imperial Russia, and of course the Soviet era.

Over the centuries, the Russian-speaking world has had an enormous impact on history and world affairs. One of the best ways to see this for yourself is to get acquainted with different historical perspectives.

With Russian you can read first-hand accounts about how Siberia became part of the tsarist Empire or of the revolutions of the 20th century.

In other words, if you love history, then Russian should be at the top language on your to-learn list.

5. An Appreciation Of Russian Writing And Art

There’s something special about Russian literature that’s so hard to define. Reading works by Chekhov or Tolstoy can give a specific feeling that you can’t find anywhere else.

In fact, Russian-speakers often refer to a specific dusha (soul) that these authors explore.

Knowing how to read Russian means being able to read the original words of world-renowned authors like:

And as great as a translation could be, nothing quite compares to the original.

Learning Russian will also give you a window into literature you might not know. For example, the Russian-speaking world has its own tradition of science fiction that came up during the Soviet era and was mostly separate from the West.

And of course, if you can read in Russian, you can apply the StoryLearning® method to learn the language in a fun and effective way, through story!

Of course, knowing Russian doesn’t mean that you can only appreciate poems and novels.

With a deeper understanding of Russian, you can better appreciate art from the Russian speaking world.

Some people even say they just ‘get’ Chaikovsky’s music better once they have a certain level of Russian under their belt.

It’s unfortunate that the reputation of русское кино (Russian cinema) isn’t better known around the world. Being able to understand Russian gives you a window into some of the world’s best cinema.

If you’re a cinephile, a film-buff, or you just love movies, then knowing Russian lets you experience an entirely new tradition of movie making.

Cinema in Russia began during the Russian Empire and flourished during the Soviet era. In modern times,  you can watch Russian language films of every genre that don’t follow the standard Hollywood formula.

With Russian, you can have a better appreciation for Russian-language cinema from directors like:

7. Helping You With Other Languages

For starters, learning Russian pronunciation will help you get used to moving your mouth in different ways.

Additionally, Russian grammar has lots of features you’ll see in other European languages like verb conjugation and adjectives that match the noun.

So if you learn Russian, you'll be better prepared to tackle the grammar of languages like German, Turkish, or Portuguese.

When it comes to learning another language, the first one is always the hardest. As you learn a second language, you start thinking about how languages work overall.

This means that once you’ve taken on a language that isn’t your mother tongue, you’ve laid out all the groundwork for learning the next one. That means every language you learn is easier than the last!

Maybe the most obvious and the most common reason to learn another language is to be able to talk with native speakers when travelling abroad.

Knowing even just a bit of Russian will make your time in a Russian-speaking country a lot less stressful and a lot more enjoyable. Instead of having to rely on others to know English, you’ll be able to order food, buy tickets, and ask for advice with ease.

In other words, while you can stick to English in more touristic areas, you’re going to need more if you want to travel around more. This is where Russian can enrich your travel experience in so many ways.

While English is becoming more common in countries like Russia, Ukraine, and Kazakhstan, part of travelling is experiencing something new.

Trying to speak the local language will gain you some respect for putting in the effort. As a result, you’ll have an experience that’s more than the normal tourist trip.

So there you have it, 8 life-changing reasons to learn Russian.

Learning a new language is a rewarding experience. But it requires time and dedication. That's why you need to be motivated to learn in the first place.

Hopefully this article has given you some motivators to help you start your Russian learning journey.

Otherwise, if the task of learning Russian seems daunting, have no fear. Thanks to the StoryLearning® method, you can learn any language fast, with stories, not rules, no matter what the grammar villain says!