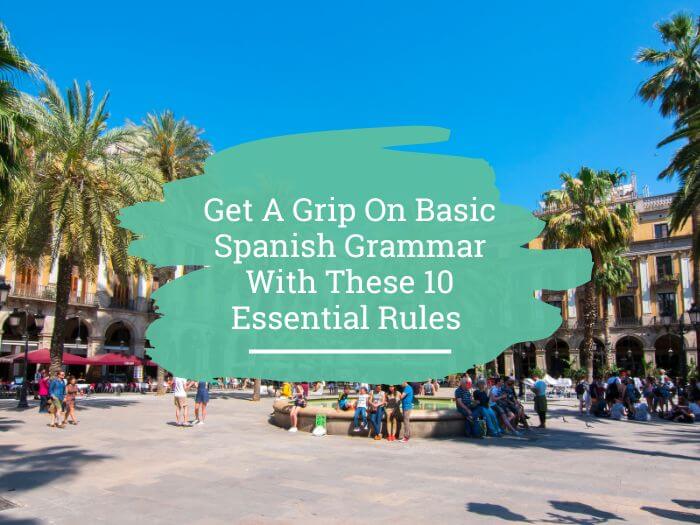 When you learn Spanish, grammar rules can overwhelm you, but the process of learning it doesn’t have to be a headache!

Yes, all languages have their grammatical guidelines, and Spanish is no exception.

Still, if you know some basic Spanish grammar, you’ll be able to sound more natural and keep incorporating those rules little by little.

So, what are the 10 essential rules of basic Spanish grammar? Are you ready? ¡Aquí vamos!

By the way, if you want to learn basic Spanish grammar (and more!) and have fun while doing it, my top recommendation is Spanish Uncovered which teaches you through StoryLearning®.

In English you use the pronoun “the” to name every noun… and that’s it.

Basic Spanish grammar quickly becomes tricky when you discover that Spanish is a gendered language: nouns have one of them. And the surrounding pronouns, articles, and adjectives reflect it.

Words in Spanish can have two genders: masculine and feminine. This may sound strange, but la cocina (the kitchen) is a feminine noun, and el baño (the bathroom) is a masculine one.

Why? Well, it has to do with the evolution of language. And it’s not unusual at all; in fact, some languages have three, four, and even five genders!

So, how do you know if a word is masculine or feminine? In general, you can tell by looking at its ending:

Of course, there are exceptions (many of them, actually).

Many words end with an -a and are masculine, such as el problema (the problem), or el cura (the priest). And, in this case, it’s super important because it allows us to differentiate it from la cura (the cure).

But don’t worry about this. As we said, the important thing is that you know the basics; then, you can go to a dictionary if you have doubts about a particular noun.

Also, by using the StoryLearning method and reading books in Spanish, you'll pick up common nouns that don't follow the pattern quickly and easily. So don't let the grammar villain put you off learning basic Spanish grammar.

Rule #2: Verbs Are Divided Into 3 Conjugations

Verbs are those words we use to express actions, processes, or states that affect people and objects.

In English, you use verbs all the time, and in Spanish the same thing happens. But not all verbs are the same, nor are all verbs conjugated with the same logic.

There are three main types of Spanish verb conjugation:

Verbal modes indicate a certain position of the person who speaks regarding what is said.

There are three defined modes:

Rule #4. There Are Many Past Tenses In Spanish

In Spanish, there are multiple ways to use the past tenses:

Still confused about the Spanish past tense? Check out this post on the difference between Spanish preterite and imperfect tenses.

If you want to sound more natural in Spanish, don’t use pronouns in every sentence.

In Spanish, the verb conjugations have so much information that you can avoid saying the pronoun.

You don’t have to worry too much about word order when forming a sentence, because the syntactic structure of Spanish is the same as that of English: SVO (Subject + Verb + Object):

However, as I already said, sometimes it isn't necessary to make the subject explicit: Es doctora ((She) is a doctor); Viajo por el mundo ((I) travel around the world).

Finally, consider that Spanish is a little more flexible than English in this regard, and sometimes the SOV model (Subject + Object + Verb) can be used too, especially when we already know the object: Él cantó una canción (He sang a song) could be Cantó la canción ((He) sang it).

Rule #7. Questions Have The Same Structure As Statements In English

Many times, the difference between a statement and a question in Spanish is only marked by the context and the intonation you use.

This means that you don’t need to change the order of the sentence structure, as is the case in English.

Rule #8. Not All Countries Use The Pronoun Tú

In English, the second person singular pronoun is simple: it’s always you, regardless of whether we are addressing someone close, such as a friend, or someone to whom we must show some respect, such as a professor.

But in Spanish there are two second person singular pronouns you’ll use depending on the context: tú and vos.

Let’s see an example with the sentence “You have a job that you love”:

But there’s something else! There are some countries where the pronoun vos is used instead of tú (and they are a few: Argentina, Uruguay, Paraguay, El Salvador, Honduras, Nicaragua…).

The “problem” is that not just the pronoun changes, but also the conjugation of many verbs that accompany it, especially those in the present tense:

Rule #9. Adjectives Are Placed After The Noun

In English, adjectives always are before the noun they accompany: “a red dress”, “a round table”, “a beautiful day”.

But Spanish adjectives usually come after the noun, especially when they express:

If you’re wondering if adjectives can sometimes come before the noun, the answer is yes, especially in a more formal or even literary register:

The accent marks, known as tildes in Spanish, are widely used above the vowels.

They're indispensable: that little line can completely change the meaning of a word, or even a sentence. Do you want to see a real example of how important accent marks are?

And now, let’s see when to use the accent mark in Spanish:

Well done – you've reached the end of this guide to the essentials of basic Spanish grammar.

There are many more rules, and some of them are quite hard, but little by little you’ll be able to incorporate them all!

If you are looking for a practical and entertaining way to continue improving your Spanish, try the StoryLearning method.

Through stories, you are going to listen to new vocabulary, learn grammar and discover accents from a lot of Spanish-speaking countries.