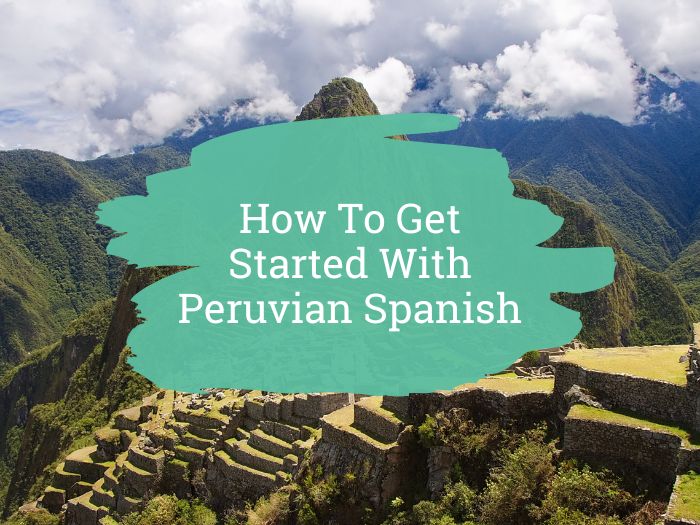 How To Get Started With Peruvian Spanish

If you're learning Spanish, then perhaps your goal is to visit Peru, one of the most fascinating countries in Latin America.

Home to an amazing cultural heritage, it also has astonishing natural landscapes and world-renowned cuisine.

All this comes together to create a very interesting, strong-rooted culture, one that attracts curious people and visitors from all over the world.

So it wouldn’t be strange for you to be interested in Peruvian culture; and, by extension, in Peruvian Spanish (language and culture usually go hand in hand, right?).

As you probably know, Peru’s official language is Spanish, although they speak a very special variation of it (several variations, in fact!). Do you wanna hear more about this Spanish dialect? Don’t worry, just keep reading!

As you probably guessed, Spanish is not the only Peruvian language. This country, like many other Latin American countries, is very linguistically rich, and experts consider there are more than 40 living native languages.

This means that the linguistic situation in Peru is very different than, for example, the one in Bolivia, where indigenous languages are far more popular and monolingual Spanish speakers account for only half of the population.

In Peru, Spanish is so well established that you can find up to four different local dialects, depending on the region. Among them, Peruvians use the one spoken in their capital, Lima, as their standard dialect: limeño or ribereño, known in English as Peruvian Coastal Spanish.

In Peru, you can find four main Spanish dialects:

Each of them has its own characteristics and vocabulary; and, of course, none is more correct than the other.

However, Peruvians do have a standard variation among them, Peruvian Coastal Spanish. That’s the dialect spoken in the capital, Lima, and by around 30% of the population.

It’s also the one used in media, government, and official documents. So that’s the one we’re gonna talk about today.

Many non-native Spanish speakers find that Peruvian Spanish is very easy to understand.

Peruvians tend to pronounce all the letters in the words, even the final consonants, something that differentiates them from, for example, Puertorricans, who tend to elide some consonants. That’s a big help!

Of course, they pronounce it in their own way. In Peru, you’ll find that people don’t use different sounds for -c, -s and -z; like in most American countries, they just use the same -s sound.

As you may already know when speaking about Spanish dialects, you have to take into account which second-person pronouns they have.

Spain is the only place where you can find the vosotros pronoun. In Latin America, almost all countries use the ustedes form, including Peru.

On the other hand, the vos pronoun is more popular in the southern countries of South America (Argentina, Uruguay, Paraguay and, in a way, Chile).

All this leads to one conclusion: in Peru, you have tú and ustedes. When conjugating Spanish verbs, it looks like this:

In Peru, you can also find a lot of very curious grammatical constructions. Probably the most interesting one is a particular use of the gerund. How so?

Well, in most Spanish dialects, if you say Vine comiendo (I came eating), you mean that you ate while you were travelling; you could have eaten on the bus, for example. In Peru? Not so much.

Peruvians also use the gerund as a form of the past. If they say Vine comiendo, they could mean that they came after having eaten. Pretty interesting, right?

As well as having one of the most delicious cuisines in the world, Peruvians also have tasty slang.

Of course, like in any country, it varies from region to region, but there are some words and phrases that you can find almost anywhere.

Asu mare is the quintessential Peruvian expression. It comes from the phrase A su madre, and it’s used to indicate surprise or astonishment.

This expression is very popular and, unlike most mentions of someone’s mother, it’s not considered insulting.

Fun fact: the most successful Peruvian movie of all time it’s called… you guessed it: Asu Mare! It was such a hit that they made two sequels. Do you wanna train your ear for Peruvian Spanish? Well, now you’ve found a way.

Soroche is a Peruvian word that a lot of visitors learn the hard way. It means ‘mountain sickness’, a fairly problem common with tourists that go to Cuzco or Macchu Picchu.

Not everyone is used to being at 3000 meters (almost ten thousand feet) above sea level!

The problem is that, at such heights, oxygen is more scarce, and our bodies can have a hard time getting used to that. Peruvians usually offer one of two remedies: Soroche pills (a kind of aspirin) or, more traditionally, coca, either as tea or as leaves that you have to chew.

Chicha is a traditional alcoholic drink. It’s made out of fermented corn and it was very popular among the Inca nobility. If you visit Peru, you absolutely have to taste this drink!

Almost all slang has a special word for work since it’s a very important aspect of everyday life. Peruvian slang is no exception.

The origin of the word chamba is not clear —some people say that it originated in Mexico, associated with the US Chamber of Commerce— but something is sure: in Peru, you’ll hear it all the time!

Sancochar is a cooking method that consists in putting something —usually meat or potatoes— in boiling water. It’s very common in Peruvian cuisine, to the point there’s a specific meal called sancocho, a delicious stew that you definitely have to try!

Cabecear is a verb that means “to head”, but in Peru, it has an additional meaning. People use it to mean things like “to not pay a debt” or, more generally, “to cheat, to rob”.

If you hear someone saying Él me cabeceó el libro que le presté (literally, “He headed the book I borrowed him”), you can assume they’re talking about theft.

You may be familiar with this word because of “La Bamba”, a traditional Mexican song popularized by Ritchie Valens. But don’t get too confident: bamba means something very different here.

In Mexico, it’s a dance; in Peru, it’s an adjective that means “false”. Someone could say, for example, Esas zapatillas, ¿son originales o bamba? (Those sneakers, are they legit or fake?).

A mosca is a fly. So, what does ser mosca mean? Because we’re almost surely not talking about Jeff Goldblum in a Cronenberg movie. No: ser mosca means “to be smart, quick, sharp”.

Like with work, most slang has a word for money. In Peru, this word is luca: in the linguistic exchange house, one luca is worth the same as one sol, Peru’s official currency.

A quick side note. Although a lot of Latin American countries use this word to refer to money, the value changes, like currency, from country to country: in Argentina, for example, a luca is equivalent to one thousand pesos.

What do you say if you don’t have a single luca? Well, you say Estoy aguja, that is, “I’m broke”.

In standard Spanish, a pata is a paw or an animal leg. Peruvians use it like that too, but their slang adds another meaning: “friend” or “acquaintance”. Ricardo es pata mío means “Ricardo is my friend”.

In South America, avocado is mostly known as palta (a word that comes from Quechua) instead of aguacate (which comes from Nahuatl).

In Peru specifically, the expression Qué plata is used to indicate shame or embarrassment. Qué palta me dio caerme en la calle means “I felt embarrassed because I fell in the street”.

Causa is a polysemic word (a word with two or more related meanings). In international, standard Spanish, it means what you could expect: “cause”. But Peruvians have not one, but two additional meanings to that.

On one hand, a causa is a typical Peruvian dish, a kind of mini-casserole that consists of layers of mashed potatoes, avocado, and tuna.

It’s served just like vengeance, cold, and it’s incredibly delicious (I don’t know why, but writing this article is making me hungry). On the other hand, Peruvians also use the word causa as a synonym for amigo (friend).

Imagine that you’re eating out with friends and, at the end of the night, the waiter brings you the check. You then have to hacer chancha, that is, everyone chips in to pay the bill.

Hacer chancha is not reserved for paying checks; it can be used anytime you pitch in with friends to pay for something, it doesn’t matter what the reason is.

In general, a piña is a pineapple. But that’s not all: Peruvians also use it to mean “bad luck”. ¡Qué piña! is a way of saying Bad luck!

In Peru, you can also say that someone está piña, meaning that person has very bad luck, or even attracts it, something very close to the English “jinx”.

The Basics Of Peruvian Spanish

You now have a good idea of how Peruvian Spanish works. This is just the beginning, of course; Spanish is a very complex language and has a lot of nuances and intricacies. That’s the fun part, right?

That’s how learning a language can teach us a lot about a culture: by understanding its untranslatable words, its particularities, and its quirks. And, of course, its stories.

If you’re planning on learning Spanish, I have some good news: you can start right now with StoryLearning, a special language learning method that emphasises good stories over grammar. Can’t wait to hear from you!